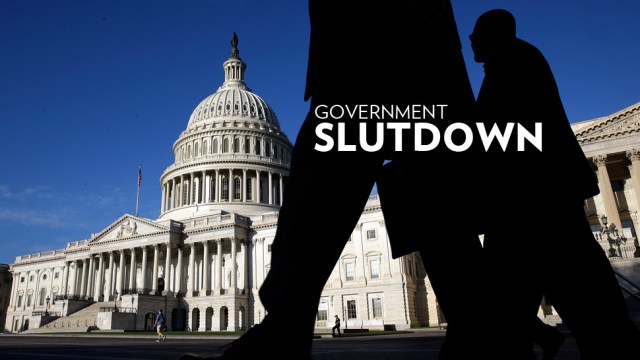 And they say that in 2013 women still don’t have any power. Behold, the US government, steward of the most powerful and wealthy country in the world, is about to be brought to its knees by a group of post-fertile conservatives who, more than anything, fear a loosening of their demographic’s grip over the choices of sexually active women. In fact, conservatives hate sluts so much that at midnight to night, they’re going to shut down the government over it.

Here’s a little background, in case you don’t like spending your weekend time thinking about old guys who can’t stop thinking about your sex life: The House of Representatives has had a hard-on for defunding Obamacare since its passage (they’ve voted to repeal it over 40 times) and, as a last-ditch effort to keep people from having access to medical care, they’ve tried to attach delays to its full implementation to the new spending bill without success, since any bill they pass is bound to be rejected by the Democratic-majority Senate and for sure not signed into law by the President. On Saturday, the House passed a spending bill that attached to it several whackadoodle provisions, including delaying the full implementation of the Affordable Care Act for another year and a year-long “conscience clause” that would allow women’s bosses to declare certain types of birth control icky and deny women who work for their companies the ability to use their company benefits on whore pills. This is a tactic that makes about as much sense as refusing to pay your mortgage unless your banker agrees to start getting bikini waxes, but WEEEE! It’s a wingnut free-for-all!

Even after the GOP disaster that was the 2012 elections, conservative legislators are still harping on their most disastrous ideological stand— this war on women anti-birth control nonsense. Apparently no one— in Washington or Alabama or Michele Bachmann’s home country of Dumbfuckistan — has learned their lesson. A spokesperson for Kansas Republican Rep. Tim Huelskamp told CNN on Saturday night that he’d been “pushing for the (conscience clause) since he entered Congress” and that was a “big deal.” Rep. Trent Franks told reporters that he was super stoked about the conscience clause, as a mandatory birth control benefit was “one of the worst things” about Obamacare and implied that a lot of Republicans were totally stoked about shutting down the government over fear of unbridled whoredom. Politico reporter Ginger Gibson Tweeted on Saturday night that while all this was going on, all of this attempted rights-stripping, members of the House were drinking so much that she could “smell the booze wafting from members” as they left the Floor.

So, let’s revisit what’s about to happen because the drunk old men running the US Congress won’t budge on sluts:

At midnight tonight — the end of the fiscal year — in the absence of an agreed-upon House and Senate bill, the government will “shut down,” which means that aspects of the government that are deemed “nonessential” will no longer be funded until the gladhanding megachurch attending evolution deniers elected by people whose idea of protest involves eating at Chik fil A can agree on a funding solution. According to the Washington Post, that means that hundreds of thousands of federal employees will not be receiving paychecks until an agreement is reached. Congress, for all the important post office naming and symbolic grandstanding they do, will continue to be paid. But what about Obamacare? What about birth control? WHAT WILL BECOME OF THE SLUTS WE SO FEAR?

A DC Democrat close to the shutdown clusterfuck simplified it for me thusly: “Here’s what will happen tomorrow: the government will shut down over free birth control, and people will start signing up for insurance policies that get them free birth control.” Sexually active women won’t be punished; the people feeling the brunt of the shutdown will be federal employees who won’t be receiving paychecks because Arizona nincompoop Trent Franks thinks keeping you (you = whores) from using your insurance to pay for Plan B is worth keeping federal employees making $35,000 a year from paying their mortgage.