As a Black MoC butch lesbian looking for love online, I can tell you that they’re not on OkCupid or Dattch or any other online dating site. It’s really sad to me because I don’t know where else to look. We’re all so busy and these busy schedules prevent us from having enough social time to meet dateable people and online sites have become the alternative, especially when it comes to finding someone special and not just hooking up.

Truth: I met my ex in the stone age of Yahoo personals.

Back then there were quite a few black lesbians on the site. Interestingly enough, most of the faces I saw on those Yahoo profile pics ended up becoming great friends of mine in the black queer community. Much of the 21 to 30 year old crowd then transitioned from Yahoo to Downelink. That site had a HUGE black community. But it quickly devolved into a hookup site as more people started posting pictures and messages that would never meet the community standards of traditional dating sites. Although it was a great place to find booty shots and I think it may have been the birthplace of “selfie modeling,” it wasn’t really conducive to cultivating mature relationships.

Many Black lesbians have taken matters into their own hands by setting up groups on sites like Meetup, but I’ve found that those are usually one group just recycling their dating options amongst each other and who wants to be a part of all that internal drama?

After my ex and I broke up, I decided to take on OKCupid because the amount of single women in my immediate circle was quickly dwindling. I even rebooted my OKC profile, changed my pic (I cut my dreadlocs off in 2012 and I thought it was deceiving to still have that picture up) and headed off into the world of dating algorithms. 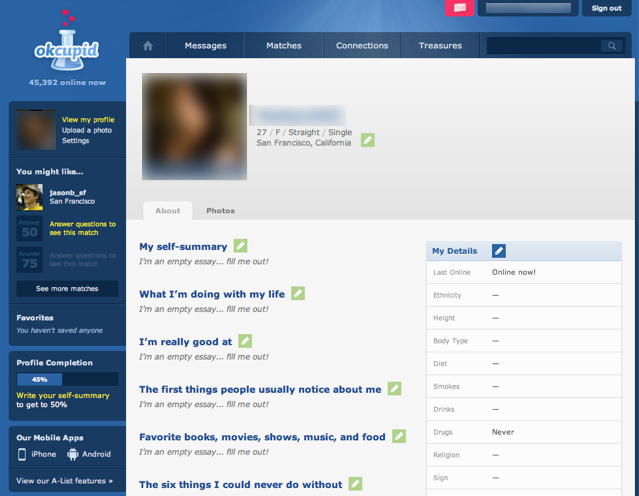 I now have a history of adding and deleting my OkCupid account because whenever I’m on there it always matches me with some with lesbian who is hanging off the side of a mountain in her profile picture. I have no idea what I put on my profile that makes OKC think these are the women I’m interested in dating. And honestly I tried throwing caution to the wind and saying “Hey, if the computer says we’re compatible then it must know what’s best, right?” Because honestly, while I’m open to diversity in the women that I date, I have found that usually out of 50 quick matches on OKC I might get three black lesbians. I met up with a hang gliding white lesbian once to see if there could actually be some sort of connection. Maybe she secretly has an affinity for ’60s soul on Stax Records or we could connect over L Word re-treads. It just didn’t work at all. The only thing we connected with was a love for Thai food and cognac which can work in certain situations. But there was no spark. And that is ok.

Hell, at least I tried.

So my friend suggested I try Dattch. I don’t know why because that was an even worse experience. The pool on Dattch was even shallower. There are so few available options that when you DO find someone worth checking out, it’s always the one who never logs in because the site is so dry. So you message them and they don’t respond for a good 2 months. It was a terrible experience and made me start questioning my dating viability as a whole. 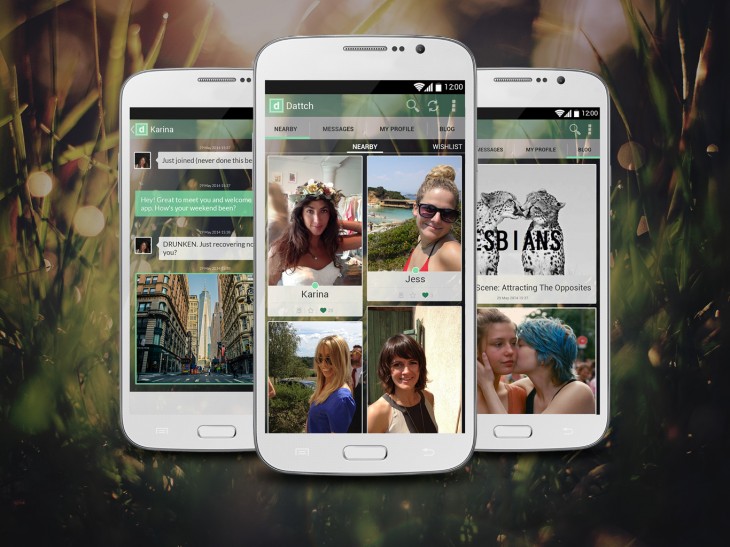 All of this puts me back at the beginning of my quest for this elusive black lesbian waiting for me in cyberspace.

So where in cyberspace are the black lesbians hooking up? I’ve spoken to so many of my people on the same journey that have said they’ve completely given up on OKCupid and other sites as options for the aforementioned reasons. There just isn’t much to choose from if you’re a black lesbian who chooses to date other black lesbians.

I spoke to a friend recently who gave me a little context on our black community. In their opinion, African-Americans don’t like using things like dating sites because it’s like admitting that we need help publicly. This is something that, as a whole, many African-Americans have a hard time doing. When put in dating terms, what that really says is “I don’t want my face appearing on a dating site because then people will think I can’t get a date and trust me, I am too fly for that to be the case.” While I can’t speak for the whole of black lesbians everywhere and while acknowledging that we’re not a monolithic group anyway, I definitely feel connected to what my friend was saying.

Even while writing this article, I have a hard time saying it, admitting that I need help in the love department. Dating requires a certain amount of vulnerability. Online dating ups the amount of vulnerability involved because it’s there for the world to see. In Melissa Harris Perry’s Sister Citizen, she talks about Black women and our relationship to shame. The ideology of the “strong black woman” is one strategy that black women have developed to specifically combat shame. MPH is quick to point out that “What begins as empowering self definition can quickly become a prison… This means that they are validated, admired and praised based on how they behave, not on who they are.”

So how then can this translate to something as simple as opening oneself up on a dating site? To me it connects to this quote from psychologist Regina Romero:

Society expects the African American to handle losses, traumas, failed relationships and the dual oppressions of racism and sexism. Falling short of this expectation is viewed by many African American women as a personal failure.

Working within the ideologies that MHP and Dr. Romero have presented, it would seem that black women would avoid spaces like OKC for a few reasons. One is the feeling that this particular app isn’t meant for us. That it is in fact a “white” space where we don’t see ourselves reflected at all. Some may even see internet dating, as Tasha Mac from “The Game” would put it, as some white mess.

MPH further explained “To be true to the race, a Black woman must not fall into depression or allow herself to be weak, pitiful, or needy — these are attributes of white women.” Which leads us to the shaming aspect. The feeling that that putting ourselves out there is openly stating that we have somehow failed at connecting with a partner in more traditional real life settings. This feeling of failure, especially in the area of relationships, adds another dimension to how Black women navigate the dating world in this very public space.

Which leads me to my next question: Are Black lesbians not interested in online dating in these spaces or is there something in the dating algorithm that keeps us apart? I have friends on Facebook and Twitter that post all the time about their adventures in online dating. These are friends that live fairly closely to me and we have tons of things in common. So how is it that we have NEVER come up in each other’s matches? Literally I cannot tell you what is on their profiles because I have never come across them. Is it crazy for me to believe that it’s because of the way these sites are set up? Silly? Probably. Impossible? No.

I don’t think that the site designers set out to keep Black lesbians apart but I do think that it’s possible that the match questions that they ask may hold the key as to why we would never run into each other on their sites. I feel that there are many questions that they DON’T ask that are culturally specific. These questions could make their matches a little more accurate. And I may be wrong, considering I have not gone through the 500 questions that OKCupid tries to ask me, but there is no longer a race/ethnicity option on the site.

Is it wrong to have the desire to date women like yourself? I don’t think so. We all have preferences and I happen to truly love Black lesbians. For me there is a cultural connection that I’m not ready to leave behind. I’d like to have a partner who shares my cultural experience and understands exactly where I come from. I don’t want to be in a relationship where a core component is explaining to them how myself and other black women, gay or straight, navigate the world. To ALWAYS be the black person in the room explaining the space we inhabit where we have to shift and make room and adjust to life and things that happen to us. I want us to share a common ground and for me culture is a very important part of that foundation. 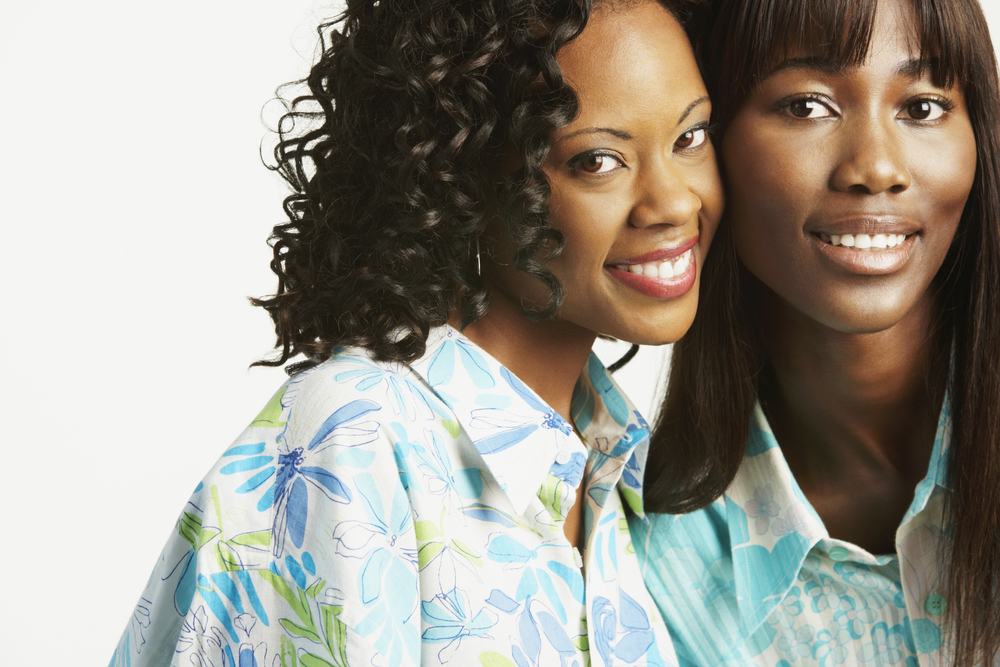 I won’t lie though and say that “culture” doesn’t have as much to do with little things. Like if I say I’m gonna “Baptist faint” I need you to pull out the church fans with the jheri curl family on them. I need you to have a firm stance on which Lionel from The Jeffersons was the best. You must have a particular fondness for The Wiz. Your shock that the Wayans made movies before Scary Movie does not win points. I don’t think that’s too much to ask. Is it?

It would be awesome to log into a site like OKC or Dattch and find another Black woman to date. Currently there’s a group of POC programmers that are attempting to design an app that does just that called THURST. The designers aim for it to be the first dating app to “decolonize the online dating and hookup scene and create a space where marginalized folks can be as thursty as they want.” It counts amongst its features filters based on POC and Non-POC designations and political beliefs. Apparently someone else has been having the same experience that I have! You can read all about THURST. Meanwhile I’ll wait for OKC and Dattch to get their algorithms right, and I’ll keep searching for suitable alternatives.