2019 brought us the hotly anticipated musical finale of Transparent, undoubtedly one of the most resolutely Jewish television programs of all time. The over-intellectual, neurotic, navel-gazing and sexually freewheeling Pfefferman family initially made history for being the first TV show centering a trans woman character but, quietly over the course of its run, also made history for its portrayal of an almost entirely queer nuclear family: the now-dead matriarch Maura Pfefferman (trans and queer), the very-much-alive matriarch Shelly (mostly straight, but kinda queer), youngest child Ari (non-binary and queer), Sarah (bisexual) and Josh (the family’s last remaining heterosexual). Sarah, Ari and Maura dated and slept with men, women and non-binary people at various points throughout the show’s run. The two-hour series-ender was a distinctly Jewish kaleidoscope of bitter grief, stubborn joy and existential sexual dread. Arguably it did a better job portraying Jewish culture than it ever did at showcasing a diverse or representative portrait of the trans community. New Yorker television critic Emily Nussbaum once described the show as “aggressively specific: Jewy, screwy, L.A., upper middle class, not so much queer-friendly as queer-saturated.” When it debuted, Tablet Mag called it “the most Jewish show to come along in years,” and not just for the tangible details, like the East Side J and Cantor’s Deli, but because “Jewishness with its rituals, its spiritual wrestling and doubt, its biblical stories and metaphors, is interwoven, appearing effortlessly within the narrative.”

But Transparent is also one of three shows with queer Jewish characters that ended in 2019. 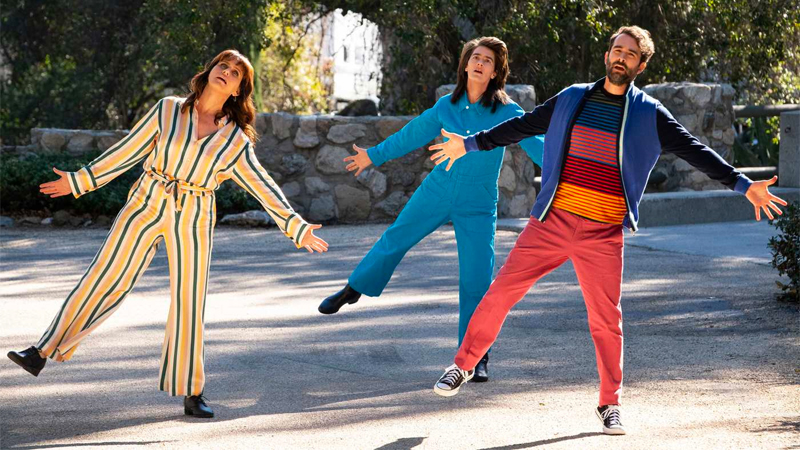 There may be some truth to the stereotype that the Jews and the Gays are disproportionately likely to be “running Hollywood.” There’s even scores of lesbian and bisexual Jewish women currently writing, producing and directing television including Ilene Chaiken, Ali Adler, Carol Leifer, Carrie Brownstein, Sara Gilbert, Diane Flacks, Abbi Jacobson, Jan Oxenberg, Lisa Cholodenko, Liz Feldman, Nina Jacobson and Rebecca Sugar. Yet the stories that make it from studio to TV screen rarely reflect this abundance, even though Jewish and queer representation on television, independently of one another, has increased.

Some of TV’s most lauded shows of the ’90s and early ’00s had Jewish lead characters, like Friends, Seinfeld, Will & Grace, The Nanny (a rare bird for starring a Jewish actress who was also writer and co-producer) and The O.C. The 2010s comprised what at least one writer referred to as an era of “peak Jewish TV.” “If you kept up with critically-acclaimed TV comedies this past decade,” wrote Michael Fraiman earlier this year in The Canadian Jewish News, “you’d have noticed a hefty number of Jewish actors and showrunners behind some of the decade’s biggest hits.” He cites Golden Globe wins by shows created by and starring Jewish characters like Girls, Transparent, The Marvelous Mrs. Maisel, Brooklyn Nine-Nine, Mozart in the Jungle, and The Kominsky Method; as well as critical favorites like Schitt’s Creek, Broad City, Moshe Kasher’s Problematic, Crazy Ex-Girlfriend, Inside Amy Schumer, Sarah Silverman’s I Love You, Man Seeking Woman, Nathan For You, Workin’ Moms, The Goldbergs, Wet Hot American Summer, Better Things and Orange is the New Black. 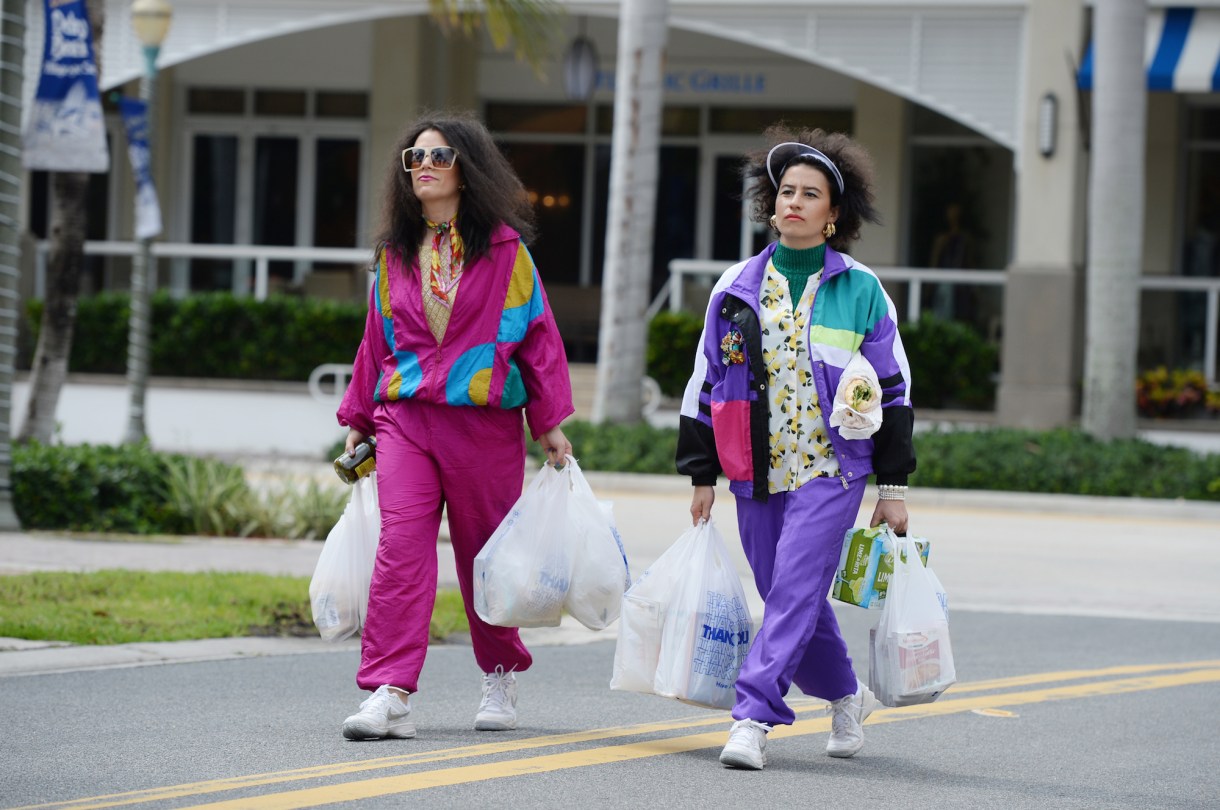 But, Fraiman points out, “after the initial gold rush, the era is slowing down,” as most of these programs wrapped up recently or are about to. If this is true for Jewish television generally, it’s doubly true for queer Jewish women and non-binary characters specifically.

This year the number of explicitly Jewish regular or recurring queer women or non-binary characters on television is taking a huge hit, and we weren’t exactly thriving to begin with. Of the 1,024 LGBTQ regular and recurring women and non-binary characters we have in our database, only 22 are Jewish, only oof those characters were Jews of color, and nearly half of them were on shows ending in 2019: The Pfeffermans and their associates on Transparent, Abbi and Ilana on Broad City and Nicky Nichols from Orange is the New Black. Although Crazy Ex-Girlfriend’s queer characters weren’t Jewish, the show still offered an opportunity to enjoy Jewishness and queerness in the same televised package, and it too wrapped up in 2019. All four of those shows were critically acclaimed, pushed the boundaries of form and style, and resonated deeply with populations who’d previously felt underrepresented — as addressed in pieces like What Broad City Meant to Millennial Jewish Women, Broad City’s Celebration of Romantic Friendship and Bisexual Culture Has Changed  TV Forever (full disclosure: I wrote that one), Orange is the New Black Wraps Up With a Very Jewish Final Season, Transparent Changed Me (and TV) Forever and Crazy Ex-Girlfriend Gave Us the Nuanced Jewish Heroine We Needed.

What remains? Susie Myerson on The Marvelous Mrs. Maisel, maybe, depending on your read of her sexual orientation. The Beverly Hills 90210 reboot BH90210 saw the in-world Gabrielle Carteris and her character of Andrea Zuckerman exploring her bisexuality, but the show didn’t earn a Season Two pick-up. The very Jewy animated comedy Big Mouth returned for its third season in October — lead character Jessi’s Mom, Shannon, had an affair with her cantor in Season One, but she hasn’t explored her feelings for women since. Sweetbitter‘s lesbian character Ari is played by Jewish actress Eden Epstein, although I’m not sure if her religion is ever mentioned on the show. The L Word: Generation Q reboot confirmed the death of its Jewish lead, Jenny Schecter.

Thus what absolutely remains is the pansexual Lauren Heller, played by Molly Bernard, on TV Land’s Younger (the actress credits her character with helping her come out, too) and Nomi, a bisexual college student on the Freeform series Grown-Ish. There’s also, most notably, Batwoman, played by the very not Jewish model/actress Ruby Rose, although references to her Judaism have been sparse thus far. We’ve also still got some Jewish shows that boast queer characters, although none of the queer women and/or trans characters are Jewish: Schitt’s Creek (which ends this year), Russian Doll and G.L.O.W.

According to our 2018 “Lesbian Stereotypes Survey,” which garnered 12.3k responses, queer women and trans folks — at least the ones peripherally aware of this website — are WAY more likely to identify as Jewish than heterosexual Americans are. This was true with Pew’s analysis of LGBT populations as well, and their survey also found Jewish respondents to be more accepting of homosexuality than adherents of other popular religions in the U.S. There are so many prominent queer Jews at the forefront of activist and artistic movements. Yet we are uniquely hard to find on television, although stories about the intersection of faith and homo- or bisexuality have been some of the most popular queer stories ever told.

For many queer Jewish millennials, Transparent and Broad City were the first time we saw anything that looked anything like us on television. It can be one of those things you don’t realize you need until you get it, and then you’re left craving so much more, especially at a time when Anti-Semitism is very much on the rise. Stereotypes about Jewish people permeate even the most socially conscious queer communities — most nefariously, the assumption that all Jews are Zionists — and stereotypes do their best work in absence of alternate narratives.

I started writing this post in the fall. In anticipation of the Transparent finale, I wanted to do a list of all our top 25 favorite queer Jewish characters. But there weren’t 25 characters to include. So this is what I wrote instead.