It was a slow TV week for us here at Autostraddle dot com, but we’ve got your Fall TV Preview coming at you early next week as we gear up for September’s television main events! Carmen Rios did guest star on To L and Back this week, so that’s one special treat!

+ The new season of Mayans M.C. premiered this week and though Santo Padre’s lesbian mayor, Antonia Pena, wasn’t featured in the second season debut, she does turn up next week…and her storyline hints at a bigger role for her on Mayans this season. — Natalie

+ As I mentioned, there are some EH Con panels going up on YouTube you should check out. Like the WayHaught/Jetri Newlywed Game, the POC panel, the Writers Panel…heck, just check them all out. — Valerie Anne 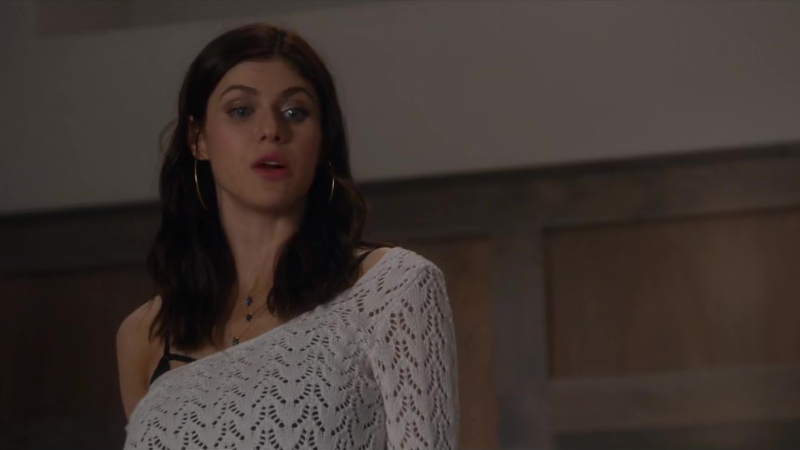 I am a little scared by this but also, slightly turned on.

This week’s Why Women Kill picks up soon after the last: Eli, Taylor and Jade are trying to find the perfect way to introduce Jade to others, when Jade’s ex-boyfriend, Duke, pulls into the driveway. Eli steps outside to talk to Duke, man-to-man, but, as is his wont, Eli bungles it and Taylor has to step in and handle it. She threatens to call the cops and reminds him that if he were found committing assault, it’d be his third strike, and he’d have to spend the rest of his life in prison. Duke backs down and Taylor returns the conquering hero while Eli nurses his bruised elbow and ego.

Later, Duke threatens to kill the dog he shared with Jade — like some modern-day Jenny Schecter or something — unless she comes to talk to him. The throuple heads to Duke’s apartment to confront him: armed with a hammer, Eli’s ready for a physical altercation, while Taylor’s prepared to write the perpetually broke felon a check for the dog. But when Duke doesn’t answer the door — he’s in the shower, it turns out — Taylor’s ready to just leave a note, much to Jade’s disappointment. Ready to be the hero this time, Eli uses his hammer to break into the house, save Tinkerbell and escape to the waiting car. They narrowly escape Duke’s grasp but his death threats echo down the street as they peel off.

When they return home, Eli is predictably smug about his success. He doesn’t stop for a single second to consider the implications of involving his lawyer wife in a crime because: 1. it made Jade happy and 2. it finally gives the win that’s eluded him for the last two years. Somehow, Taylor is persuaded by this argument, and acquiesces to Eli’s man-baby tears. But before they can truly celebrate Eli having put his wife’s livelihood — the job that’s paying the bills and putting food on the table — at risk for the sake of his ego, Duke storms in looking for Jade.

Eli tries to confront him, again, but Duke tosses him against the wall. Taylor launches herself onto Duke’s back — personally, I would’ve just stood there, watching Eli get his ass kicked like he said he wanted — but he flings her off and drops her to the floor. Duke rushes up the stairs, yelling for Jade, and when his back is turned, she emerges and strikes him with the hammer. The hit sends Duke over the banister, crashing onto a table in the foyer. Jade stalks down the stairs, still clutching the hammer, and surveys the damage.

“You broke my leg, you crazy bitch,” Duke cries.

Towering over him, Jade responds, “Fuck with my family again and I’ll break the other one.”

Both Taylor and Eli are aghast as they get their unanticipated answer to the question they never really thought to ask: Who did they invite to live in their home? 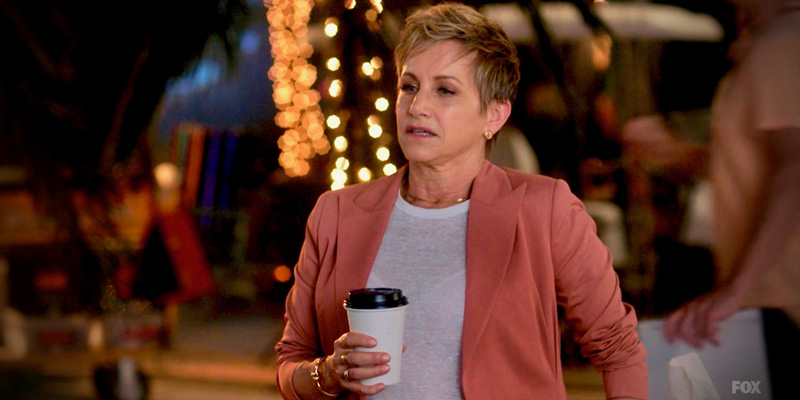 UGH if they expect me to care about this ongoing arson plot, there better be whiskey in this coffee cup.

In case you missed it, last week Gabrielle and hot producer Christine had The Sex.TM And ever since they had The Sex,TM everything has gotten weird between them. Christine swears that it’s nothing Gabrielle did personally. It’s just that since the 90210 set was burned to the ground thanks to a stalker-arsonist (this show, amirite!), HR has been extra careful about relationships between cast and crew. Which means that if Christine and Gabrielle want to have The SexTM again – and they do! To quote hottie Christine, “I’m more a player than a stayer, but I like you… A LOT.” – then they have to sign a workplace sexual consent contract. The problem? Gabrielle hasn’t exactly come out yet, so this contract is a actually pretty big deal.

(Before we go any further, I have to say, I found Gabrielle’s surprise and incredulity about signing a consent form at the workplace hard to swallow! She’s the head of the actor’s union for crying out loud! She should be the first one to understand the importance of contracts like this in protecting workers’ rights. Anyway, moving on…)

After having a few days to weigh back and forth about it, Gabrielle decides that Christine is worth confronting her fears. When the entire cast is gathered around the food table between scenes, someone else complains about the so-called “love contracts.” Gabrielle clears her throat and admits that she had to sign one, too. Immediately Jennie perks up! “Who is He?” she squeals in her most annoying teenage gossipy voice. To be fair to Jennie, it is exciting – I’ve gotten the impression that Gabrielle doesn’t often open up about her personal life.

Gabrielle shakes back her nerves and stands her ground, the person she’s seeing isn’t a “He.” “You’re gay,” Shannen Doherty deadpans unimpressed without looking up from her phone. Soon it’s a chorus among all the cast members, “She’s gay!” “She just said she’s gay?!?”

Amused and a little overwhelmed, Gabrielle stops her chosen family of nearly 30 years before they can go too far – “ As of now, I’m coming out as undeclared.”

“I think that’s really brave,” nods Brian. And you know what? I think so, too.

I can’t believe that the finale is already next week! How can a story this delightful also be this short? This is the cruelty of the Television Gods, for sure. 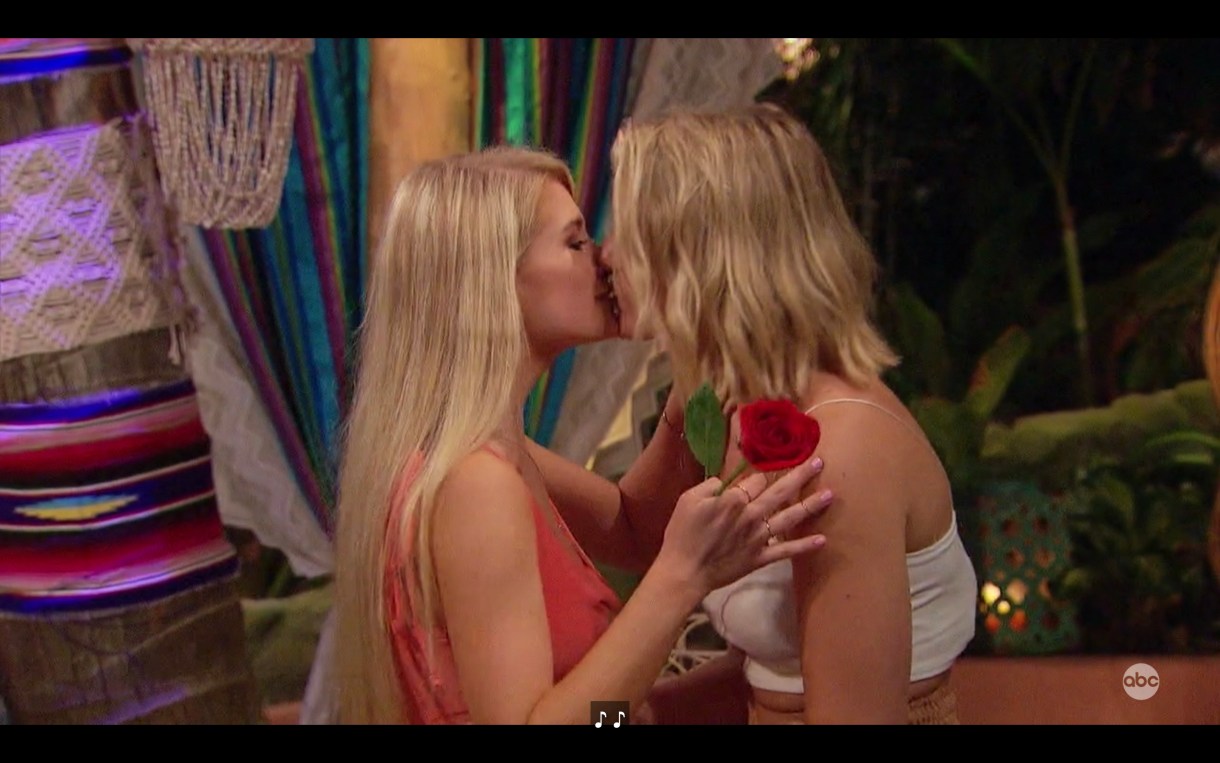 Since Demi and Kristian made things official, this show has become increasingly tedious. Once again, this week featured terrible men and the women that tolerate them, with overblown arguments and half-assed apologies. In a twist that shocked absolutely no one, several singles from last week’s wedding joined the cast, stressing out existing couples and making a few people realize they should probably just go home. A guy that lives in a van shaved off his mustache to ask his ex-girlfriend to come home with him, a bunch of men were deeply terrible to the women they supposedly love, and Mike, one of the few halfway decent people on the beach, went home alone.

Kristian and Demi made a few appearances, offering commentary and being supportive of the long-suffering women on the show. Demi happily shares that a week after she met Kristian, they jumped into a hot tub late at night and “just started making out.” And Kristian gets to give Demi her rose this week, saying that she feels like “the luckiest girl in the world to be able to share all of this with [Demi].” We get a few more kisses and mutual professions of love, and it’s all very sweet.

Next week brings fantasy suites, meaning that with the finale looming, most of these couples will break up dramatically, citing real-world incompatibility and lukewarm connections. And while Demi and Kristian have looked pretty content during their time in Paradise, next week’s teaser shows Demi expressing her discomfort with kissing Kristian on-camera, and shows Demi crying, “I really just don’t want to lose you.” Since the original preview showed these two in the fantasy suite and has teased at an engagement, I’m hoping for a happy ending that makes watching all of these heterosexual shenanigans worth it.