I’m saying these things now from a place of fear. I’m scared that people are going to accuse me of abusing the system, or challenge my identity or affirm my own self-consciousness.

When I first came out, I felt like every queer person knew more about gay culture than I did so I planned on binge watching The L Word, listening to Tegan and Sara, and otherwise studying “how to be gay.” My girlfriend introduced me to Autostraddle and I looked at it like some kind of Lesbian Bible. (Sometimes I still feel this way.) When I read “You Need Help: Being the Visible Femme,” I had a serious breakthrough. “Guys, this is an actual thing that other people experience. I’m not the only femme in the world!” It blew my mind.

I’ve struggled a lot with “invisible femme” syndrome. I became frustrated as I scoured the internet for images of what queer ladies look like and couldn’t find someone who looked like me. I started my own tumblr, Dress Me Dandy, in hopes of expanding my queer femme world. Having a dashboard full of #femme and #lesbianfashion images that I can connect with (and clothes that I envy!) has been really empowering. Despite this, I still struggle with the inside/outside dynamic. Looking like I belong within the community I identify with has always been a tricky topic for me to navigate.

At the tender age of 11 I wrote a piece very similar to this. It was titled “Blueberry Eyes” and was published in the employee newsletter at my mom’s work. I talked about the disbelief I encountered when I told someone I am Alaska Native (the term “Alaska Native” encompasses many tribes, just as “queer” does for many identities. It is the preferred umbrella term.) To non-Natives, my outside didn’t match their ideas of what an indigenous person should look like. I am Native from my mom’s side of the family. She and I look a lot alike but I get my coloring from my dad. With my paler skin, light brown hair and blue eyes, I don’t look the (stereotypical) part. I’ve carried this sentiment with me as I’ve grown up. Eleven years later and I am still writing about the disconnect others see between my identity and how I present myself.

While my younger self confidently stated, “I just let them believe what they believe because I know that I am [an] Alaska Native,” my present day self has been a little more sensitive when it comes to owning my queer and Native identities. Why do I think it’s important for other queer people to recognize me as queer? I just want that acknowledging head nod that screams “I’m gay and you’re gay and we play for the same team! Hooray!” I don’t think it’s too much to ask for. 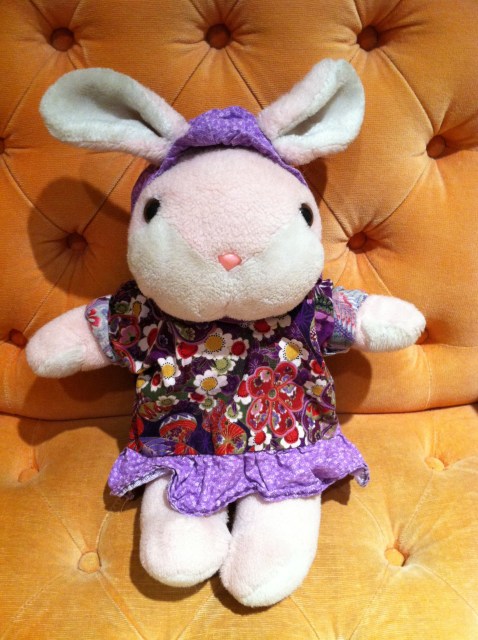 My mom is awesome and made a kuspuk (an Alaska Native overshirt) for my childhood stuffed animal, Pink Bunny.

I never felt comfortable in my Native identity so I don’t think I really allowed myself to pursue it and learn about cultural elements and really own that piece of me. When I came out I was so excited because I felt like maybe I could actually be a part of a community now — I finally had my people! There is no denying that I am what I am. When you see me holding my girlfriend’s hand down the street, you know I’m gay. But how do I break free from my identity as it relates to other people? How do I move past only feeling Native based on whether I fish or know the traditional ways? How can I push past feeling like my queer identity is tied to how much I listen to Uh Huh Her? (Which, to be honest, isn’t that often.)

The idea of self-identification is difficult for me. In the United States there are blood quantum regulations that denote whether or not someone is considered a Native American in the eyes of the US government. You even get a kind of membership card called a CDIB (Certificate Degree of Indian Blood) that you need to prove your identity in order to receive certain services.

The fact that Native identity is in some way regulated by an outside organization, that an authority exists that can deny you as part of your culture, has affected my belief that if I see myself as Native then I am. There is a guilt in passing. I receive certain benefits from being Native and yet I am able to pass as white and avoid much of the negative stigma. I am gay but pass as straight. I am frustrated that my different communities may not see me as who I am, but I can escape the outright bigotry many queer and/or Native people have to face. It’s all because I look like something I am not. I cannot change the color of my skin to appear more Native but I have thought about changing the way I dress to look more gay. My girlfriend rocks the dapper look but when I try to wear those things I feel like I’m playing dress-up. I thought the whole point of coming out and embracing my identity was to actually stay true to myself. (Which is why I prefer dresses to pants most days.)

I tried to write this unapologetically. I don’t think that happened. I tried not to list reasons why you should believe that I’m Native enough. I’m not as secure as I want to be in my identity as an indigenous person. I am so scared that someone is going to comment on this article and say that I’m cheating the system when I mark down my race on a standardized test. I’m afraid that someone will say that I don’t belong here. The fact of the matter is that I’ve said those things to myself thousands of times. The damage that’s been done has mostly come from inside myself. I’m trying to look at writing this as a kind of healing ritual. A public declaration. I’m putting myself out there for the whole world to wreck and I’m hoping that I make it out alright on the other side of this. I want to believe that how I self-identify and how I feel are the only things that matter. Maybe that starts with wearing whatever I want. Maybe it starts with writing all of this down.

When she's not pushing papers, Kirsten makes art and writes poetry on typewriters. She is awesome at flipping pancakes and wants to be an orca when she grows up. You can find her photographs and other works on her website and on Society6.

Kirsten has written 1 article for us.