Last week, you guys. Last week was out of control for those of us who follow marriage equality cases, with new rulings and orders and opinions and clarifications coming out literally every day, multiple times a day, until by the end of the weekend a grand total of 26 states achieved marriage equality. That’s half the country, y’all, with even more states waiting in the wings.

The situation has been changing so rapidly that even BuzzFeed’s excellent explainer, published Thursday, had to be updated several times by Friday evening. Still, it’s a good place to start as we dive into what the hell has happened, what it means and where we go from here.

First, on Monday, the Supreme Court declined to hear every single one of the same-sex marriage cases awaiting its review. That brought marriage equality to the five states directly involved in those suits — Indiana, Oklahoma, Virginia, Wisconsin, and Utah — and put several other states on alert for their own marriage bans to fall. The reason why was probably not immediately clear to the casual observer trying to keep up with a series of rapid-fire updates, but basically, it has to do with the federal circuit court system and the way cases wind their way up to the Supreme Court, which, this time around, decided not to make its own rulings. From the BuzzFeed explainer:

Monday’s ruling affected three circuits, which included six states that didn’t have marriage equality already. North Carolina, Colorado and West Virginia gave in, declining to defend their bans in what has become an uphill battle. Officials from Kansas have made moves to fight marriage equality, with a temporary start to marriages halted Friday afternoon. A judge in South Carolina began issuing licenses despite indication that the state would fight to preserve its ban; applications were later halted pending resolution from federal court. Couples in Wyoming are seeking but have yet to receive a ruling on marriage in their state, which will no doubt be heavily influenced by outcomes elsewhere in the country.

Speaking of which, a second major ruling handed down Tuesday struck down marriage bans in Idaho and Nevada. A three-judge panel in the 9th Circuit Court of Appeals decided Wednesday in favor of marriage equality in those states. Nevada acquiesced to the ruling, but Idaho requested an immediate stay, which Supreme Court Justice Anthony Kennedy granted; because of a clerical error, it also halted marriages in Nevada. However, by Friday evening the full court had lifted the stay, and Latah County began issuing licenses before the end of day. Couples in Nevada began marrying Thursday night after Kennedy’s slip-up and a few other hurdles were resolved. 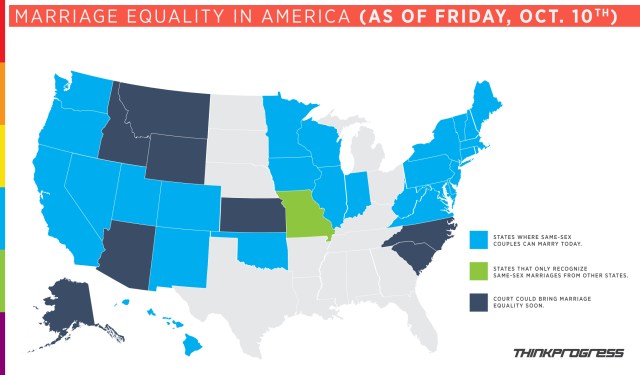 A beautiful map ThinkProgress made for us Friday morning was outdated by Friday night. Oops! Add North Carolina and Idaho to the light blue category. Via ThinkProgress

No other states are directly affected by the 9th Circuit ruling, but with every state that achieves marriage equality, those without it find that harder to defend. With that in mind, several other states prepared for their own confrontations with marriage equality. Alaska, home to the nation’s very first same-sex marriage ban, had that ban torn to shreds Sunday afternoon because of the 9th Circuit ruling, and marriages are expected to start there immediately. A federal judge in Arizona issued an order Thursday allowing both sides in that state’s suit over marriage to defend their positions before his finding that the state follow a higher court ruling in favor of marriage equality comes into effect. Montana could similarly be bound by that ruling.

Once these wrinkles are resolved, 35 total states could allow same-sex marriage. After that, things will probably calm down unless the Supreme Court relents and hears a case intended to apply to the whole country. But every ruling in favor of marriage equality grants more than a thousand rights to same-sex couples who choose to marry in those jurisdictions. Those are rights that offer economic security as well as legal protection and peace of mind for creating and preserving a family — a right to which we should all be entitled. That’s what we can’t lose sight of as we watch this marriage equality train make its way through the country.