It would appear that although originally Judge Virginia Phillips‘ injunction against DADT had temporarily stayed the Pentagon from enforcing it, a new block from the 9th Circuit Court of Appeals has halted Phillips’ measure and DADT seems to be at least partially back in effect. No one really knows what this means, not even the people in charge of enforcing it (or not); so far the best estimation seems to be that gay people (like Dan Choi) can still go to enlistment centers and go through the entire process – there’s no law against enlisting a gay person – but they are fully vulnerably to discharge immediately upon actually entering the armed forces. (@politicsdaily) 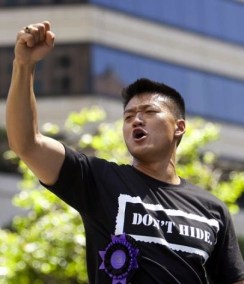 Defense Secretary Robert Gates says this is exactly the kind of outcome he was trying to avoid with his plan to very slowly work on repealing the ban with a ten-month review process.

Last week, as the courts were busily undoing this careful strategy, a visibly grumpy Gates told reporters that he still feels “very strongly that this is an action that needs to be taken by the Congress.” Lifting the ban, he said, “requires careful preparation and a lot of training. A lot of revision of regulations. . . . [has] to be done in addition to the training.”

The question that remains, of course, is whether Gates is right about the “careful preparation” and “training” that will take so long. It’s clear that this bizarre legal limbo needs to end – but could it be ended just as easily and effectively by the government’s ceasing to fight this case and allowing an injunction against DADT to stand? Gates thinks no, and the Justice Department agrees: “The Justice Department, arguing for a stay of Phillips’ ruling, said lifting the ban now “risks causing significant immediate harm to the military and its efforts to be prepared to implement an orderly repeal of the statute.”

But the media is beginning to wonder whether the sky would really fall if this issue were over starting tomorrow, and as for what enlisted soldiers think – arguably the opinion that matters most – no one seems to know. If the military gained any pertinent insight on this from their survey, they’re not letting us know what it was.

Stay tuned, as the legal status of this issue seems to be changing literally by the hour. And as every reputable source (and the government) is telling you, if you’re enlisted now and want to keep your job, don’t come out yet. It’s looking more and more like it will be safe in the near future, but we don’t live in the future.