This is great news for us and our financial sustainability — and more importantly, great news for all Autostraddle readers. The more people who join A+, the better the site is for everyone — we have more resources and stability to sustain new programs, take on new writers, and hire more queer people, and can continue to fund things like new tools and infrastructure, paid leave for illness or bereavement, and increased efforts toward accessibility. We can also ensure we’re here (along with our extensive archives!) for the next generation of queer & trans people.

We understand that many people — maybe you if you’re reading this — joined A+ because they’re in a place in their lives right now where they can support and they want Autostraddle to be around, even for people who can’t support right now.

Times are tough, but A+ is $4 a month, and of the thousands of people who tune in to read Autostraddle every hour, we have to hope that there are 50 more folks who can join and pay it forward for other gay people! Are you one of them? 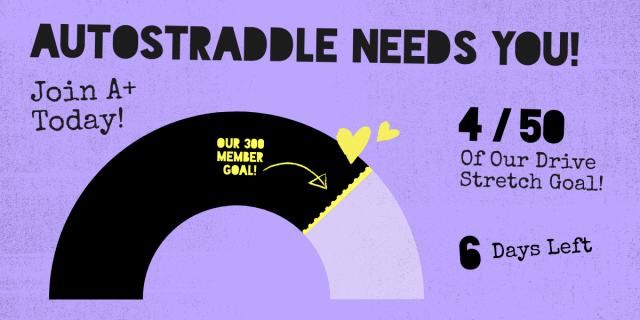 But wasn’t the 300 person goal what you needed?

The 300 people who signed up have given us an incredible gift, and we are grateful down to the bottom of our lavender gay hearts. We initially set the goal of 300 people because we thought that was what we could do in two weeks; YOU ALL DID IT IN JUST ABOUT ONE. We’re in a place where we need as many new members as we can get, and since we were already planning to run the drive through the 30th, we’ve set a stretch goal.

To break down our situation right now:

At the end of the day, it’s still Pride; we’re exhausted but also working hard and full of hope, trying to be there for each other. Will you join A+ to be there for other readers?

Not sure yet? Check out our A Day of Work series to see the behind-the-scenes of the work you’ll be supporting. And again, if you’re already an A+ member, thank you.

Nicole has written 52 articles for us.