Oh, hello there! How are you? More importantly, how’s your DVR? Great, great. Get comfy… let’s begin. 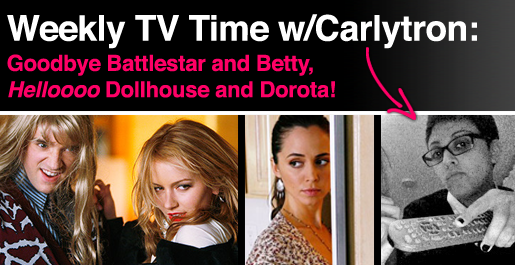 So NBC had a focus group watch some of Parks and Recreation, the new Amy Poehler comedy from the guys behind the US version of The Office. However, the focus group hated it.  I hope it does well, I’m really looking forward to seeing Amy Poehler on my TV once a week again. And! They have a twitter for the show now.

Did you know that Lifetime is airing the 1996 Angelina Jolie film Foxfire right now, as I type this? How odd. Oh look, Real Housewives is on…

Oh my god, you guys. So much good TV stuff happened last week. Let’s dive right in, shall we? 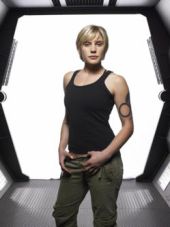 Battlestar Galactica is done! I didn’t start watching ’til this season, and I’m sure my roommate Matthew is relieved that he won’t have to explain this show to me anymore. At some point, when I have some free time, I’ll watch the whole show start to finish. But, ’til then, I’ll say: Battlestar Galactica seemed really cool, and now it is over.

I did actually really like what I saw of it — and I’m happy it’s bowing out gracefully before things get really bad (see: Buffy, Sex and the City, the goddamn L Word). Battlestar has been criticized for being confusing and convoluted at times, but the thing I personally never understood is that we were actually supposed to believe that Starbuck was into dudes. That’s more baffling than a shipload of Cylons and strange religious references.

Gossip Girl is baaaack! Thank God. This was such a good episode, you guys! Blair’s little wave as the curtain goes down at the end of their ridiculous school play was amazing. Also, how does Serena not know the director is gay? He was so obviously gay. Where are Lily and Eric? Serena’s in some fancy-ass play and they didn’t even show up?? That bummed me out, they’re two of my favorite parts of this show. 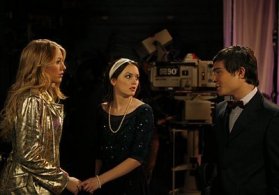 Sorry Chuck Bass we were just making out

Other favorite parts of this show include Blair and Dorota — stellar! — and Serena, who needs to have her gaydar adjusted a smidge.

This is also the first episode ever where I didn’t hate Vanessa, so kudos to her. The Humphreys still suck. Except Dan, at the end, telling Blair that she could do whatever she wanted with the knowledge that he had sex with Rachel in a closet … that’s probably the only time I’ve ever liked him.

I’ve spoken with a few people who think this show has jumped the shark in the past few episodes, but I must disagree. The thing that makes this show so wonderful is its campiness, and I happen to believe that ridiculous storylines are awesome. Also, I will forever watch this show because I am convinced that Blair and Serena will make out one day. So bring it on!

BETTER! OFF! TED! Oh man, this show totally impressed me. Smart writing, hilarious premise, and Portia was amazing. Her character on this show is kind of a combination of her two prior regular television roles (Nell on Ally McBeal and Lindsay Bluth on Arrested Development). I highly recommend this show, I can’t wait to see more.

Ugly Betty is leaving us for a while, to be replaced by In The Motherhood. I’m really sad… the past few episodes have been really on point.

The ‘Why Isn’t This Gayer’? Award

I’m going to use this space to call out … all of television. All of it. Right now there are no lesbians on scripted TV, are there? If there are, I don’t know anything about them. That is ridiculous! That’s it — I’m going to write a show. Tonight. I’m writing it tonight.

Portia has been everywhere promoting Better Off Ted, and looking simply smashing doing so. I can’t really begin to explain my adoration for her and Ellen, and I probably don’t need to since… duh. I’m not even going to link to any of her interviews, since I know you’ve seen them all already… except for her Prop 8 fake PSA from Kimmel. That is here and it’s amazing.

Oh, you know, 30 Rock and The Office? Maybe you’ve seen them once or twice? Yeeeah. I don’t even know where to begin. Both were stellar this week, as they usually are. I promise I will try to not use these two shows for this award every single week, but until the rest of television steps it up a bit I will be forced to. 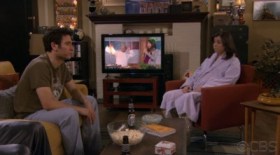 How I Met Your Mother was also good this week. The best parts being Marshall extolling the virtues of the night shirt and Robin’s wacky newscast. True fact about me: one of my favorite  conventions of comedy is having something insane happen in the background of a scene while people go about their business in the foreground, completely unaware. In Living Color used to do this really well; usually a reporter would be talking in the foreground and there would be some crazy antics happening in the background. I just scoured YouTube looking for a clip to illustrate my point but was unsuccessful. Anyway, this sorta thing makes me laugh 100% of the time, and it was used brilliantly on HIMYM this week.

“This has been a really strange day.” You said it, Meredith. They gave a dude a face transplant on Grey’s Anatomy this week. The makeup and effects were super gross. No lesbian plotline at all, Callie went to the woods to try and convince Derek to come back to work (he quit and is being a whiny bitch in his trailer in the woods) but he ended up bumming her out so they just drank all day. The best part of this episode was Bailey, being a badass as usual, and Izzie ending up where she belongs– in a hospital bed.

Marshall on United States of Tara. Poor kid; his mom (as one of her alters, T) got with with the boy he likes. I love his storyline, though … I’m starting to think that the new cool TV accessory is the probably-gay-teen-boy. See also: Ugly Betty.

LuAnn on Real Housewives of NYC. Just… stop… talking… forever. Please. If you’re like me, and think this show is a fantastical trainwreck, then you might be interested in reading Richard’s recaps of the show over at Gawker. I usually end up spitting seltzer all over myself when reading them, though, so don’t read these when you’re wearing a nice shirt. 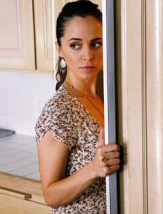 Ok, I just needed a part where I could talk about Dollhouse. This week’s episode was the first one written by Joss Whedon himself, and was totally awesome. I’m hoping the show will now find its groove and not get canceled anytime soon.

Boyd punching the crap out of Sierra’s asshole handler? BADASS.

The twist at the end (Mellie’s a sleeper doll!)? TOTALLY UNEXPECTED.

This shit is ON, for real-reals.

Though, one quick thing… why do all interrogators sit backwards in chairs? Just wondering.

That’s all from me for now… until next time, keep those DVRs whirring! (wow that was nerdy)