Right on the heels of France making it legal for gays to tie the knot, another country decides to follow suit. Yesterday, Uruguay became the latest country to eliminate laws against same-sex marriages, with 71 of the 92 members of its Chamber of Deputies supporting it.

The decision makes Uruguay only the third country in the Americas to legalize same-sex marriage across the land, after Canada and Argentina. It continues a pattern of progressive social politics in Uruguay that started with the country’s decision to legalize first-trimester abortions in October, which The New York Times called “one of the most sweeping abortion-rights laws in Latin America.” In terms of social progress specifically affected LGBT Uruguayans, the country previously had allowed same-sex civil unions, and had also moved to allow same-sex couples adoption rights and to open up its armed forces to gay people.

Along with the sweeping support – two thirds! – in the aforementioned Chamber of Deputies, the country’s lower chamber, the same-sex marriage bill has already been backed by the upper house. According to the BBC, it “is expected to be signed into law within two weeks.” 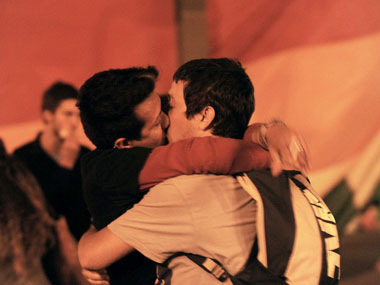 As usual, it hasn’t passed without strong opposition from religious authorities – in Uruguay’s case, from the Catholic Church, which supposedly urged lawmakers to “vote their conscience,” and called marriage equality “not justice but an inconsistent assimilation that will only further weaken marriage.”

Weakening is in the eye of the beholder, of course, but the law is definitely changing marriage. What’s possibly most interesting about Uruguay’s law in particular are some of the changes that will also affect heterosexual couples. According to First Post World:

While some countries have carved out new territory for gay and lesbian couples without affecting heterosexual marrieds, Uruguay is creating a single set of rules for all people, gay or straight. Instead of the words “husband and wife” in marriage contracts, it refers to the gender-neutral “contracting parties.” All couples will get to decide which parent’s surname comes first when they have children. All couples can adopt, or undergo in-vitro fertilization procedures. The legislation also updates divorce laws in Uruguay, which in 1912 gave women only the right to unilaterally renounce their wedding vows as a sort of equalizer to male power. Now either spouse will be able to unilaterally request a divorce and get one. The law also raises the age when people can legally marry from 12 years old for girls and 14 for boys to 16 for both genders.

In many ways, much of what advocates of “traditional” marriage fear from LGBT acceptance is that it will cause a gradual weakening of gender roles in general, since same-sex couples, by their very existence, dispute the idea that there are natural “male” and “female” roles in romantic relationship models such as marriage. And it’s well-known that sexism and misogyny, and homophobia, often go hand-in-hand. So perhaps when marriage equality opponents urge that it will change “traditional marriage” they’re right – but of course, for feminists and liberals and hopefully anyone who believes in people choosing what they want out of a relationship, that’s a good thing. Because it means that it will likely result in those in opposite-sex relationships being able to define their own roles in relationships, rather than being beholden to society’s gender roles – as well as same-sex couples being able to choose marriage if they want. (Let’s not forget that we still live in a society where, for example, over half of Americans say women should be required to take their husband’s name, at least according to one study.) 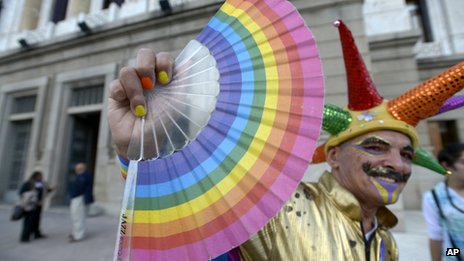 Yet, Uruguay’s law may be the most explicit rendering of how acceptance of same-sex couples is changing the world of heterosexual marriages, too. Some of the changes are a bit hard to explain in this context (why was the minimum age for marriage not only made the same, but raised, and why was it so low in the first place?) but others are not – such as the changes in terms of who can take which name, and in divorce laws. Obviously, changing a law that allows only women to call for divorce is only practical if allowing two men to marry each other, but perhaps the change in the law also reflects a larger shift in society in terms of the roles of men and women in heterosexual relationships. It certainly sounds long overdue.

So perhaps Uruguay’s marriage equality law passed this month is one of the best examples of how allowing same-sex marriage benefits the whole of society. While the LGBT rights movement shouldn’t have to focus on how their goals affect straight people, it certainly is a plus if gay marriage ends up making relationships better for everyone: marriage equality in every sense of the word.