All photos by the author.

I dipped into Taipei the last weekend weekend in October to join Asia’s biggest pride parade. It was only a short flight from Shanghai and unlike my friends who are Chinese nationals, I didn’t even need a visa or entry permit.

All I had to do was narrow down my selection of fisting-related t-shirts and I was ready.

I’d never been to Taiwan but I had a pretty positive image of the country, particularly of its queer communities and activist movements. As a journalist reporting on gender and sexuality in mainland China, I’d often stumble across news and views from Taiwan that impressed me. Taiwan has produced some really astute critical work – as well as my three favorite films involving queer coming of age amid torrid love triangles (Miao Miao, Blue Gate Crossing, and GF*BF if you’re wondering).

So perhaps this quick trip just reinforced my rosy preconceptions but it was really rather sweet. We arrived Friday and headed straight for the sites listed in Autostraddle’s Queer Girl City Guide. I convinced my travel bunny to get an I-Ching reading at the lesbian arcana shop and café salon, Love Boat. 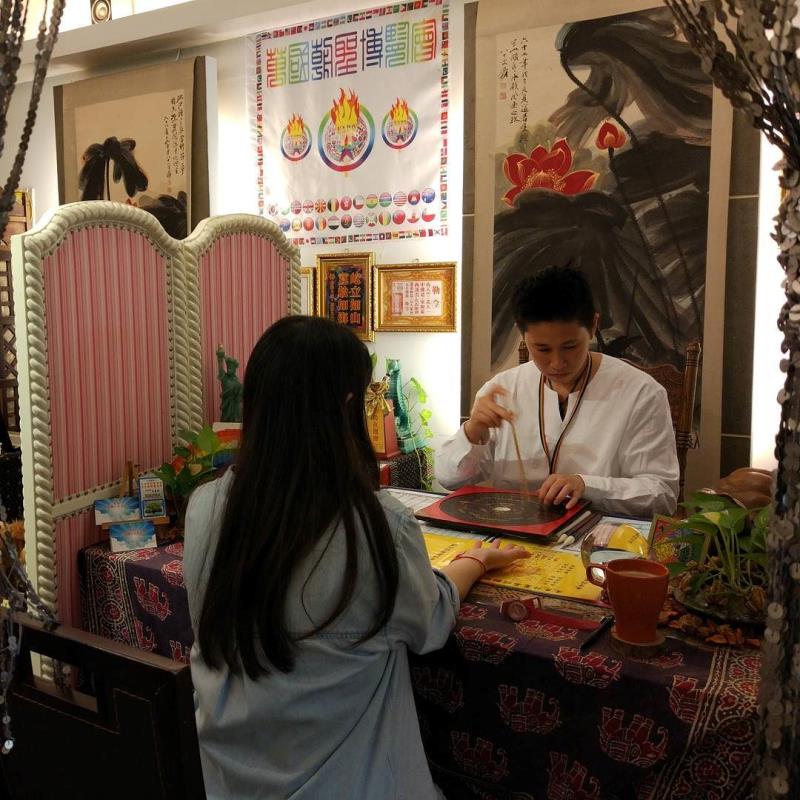 “This is the most lesbian thing you will ever do with your clothes on, Jessica,” I pleaded. She filled in a form then sat down for her divination with the babe who runs the shop. There was some tapping of a stick in a circle? Somehow this never came up in my upbringing but my family is Catholic and atheist Communist so I suppose they wouldn’t approve. Personally I’m fascinated by fortune tellers but fearful, too: I prefer to imagine the future is empty until we make it.

Saturday was the march, which would be the first since the country’s ruling in favour of same-sex marriage in May. Historic! The stream of queers thickened as we approached the starting point, and my heart started to dance. I’m obsessed with hanky code – my friends and I used to have a whole blog about it – so I actually squealed when I spotted an immaculate leatherman flagging red on the right. 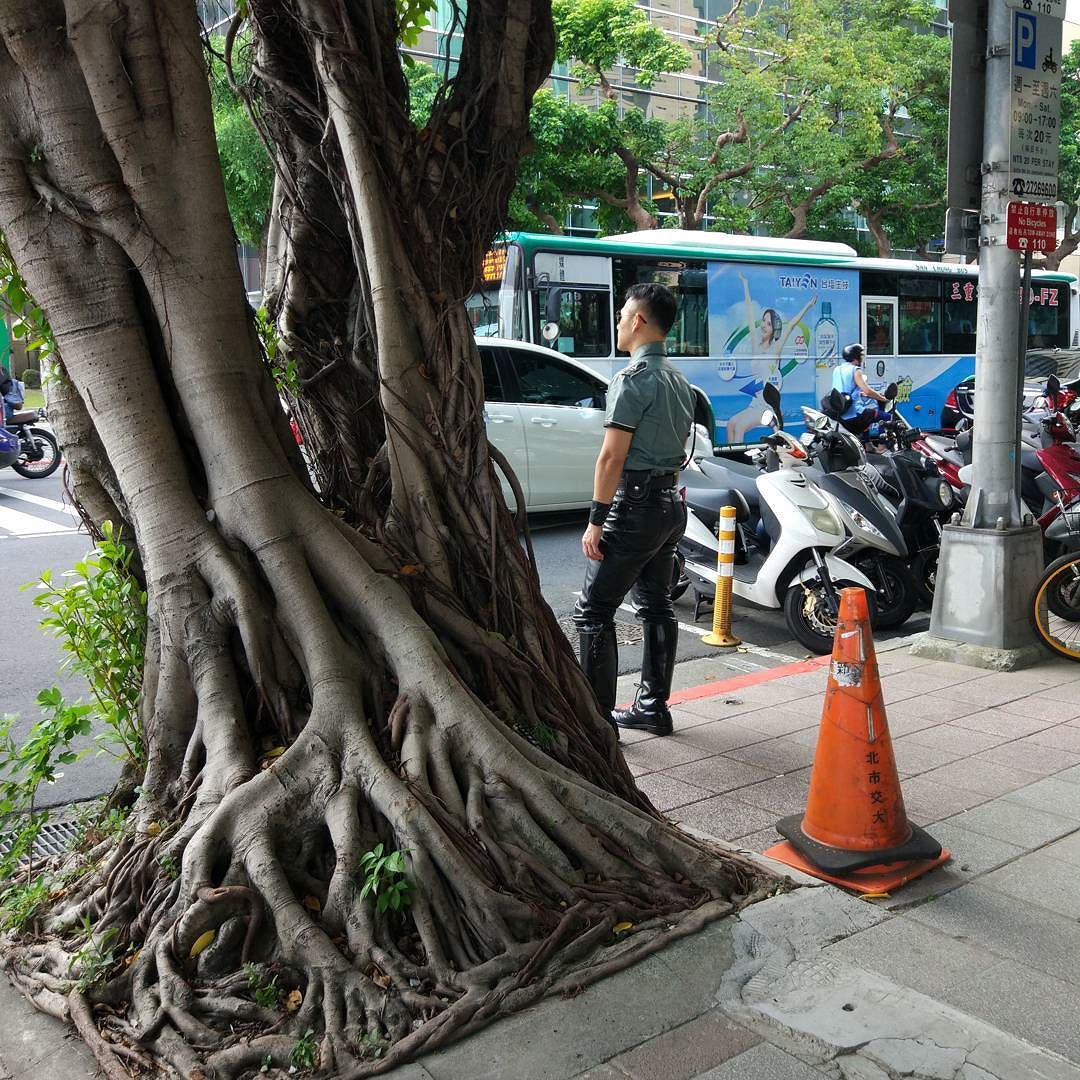 There were lots of flags showing the shape of Taiwan in rainbow stripes. I couldn’t get over the fact that the island looks like an odd butt toy – like maybe you’d gone to sterilize your butt plug on the stove but forgot to add water and it melted a little. Does no one else see this? 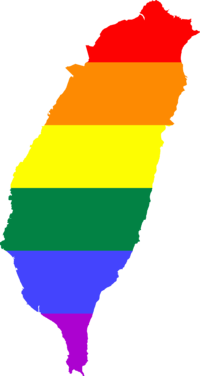 The march was to gather around the East Gate of Taipei before breaking into three routes and then reconvening at the end. It took us a while to find our friends in the squish of the crowd. “We’re by the bears,” I kept trying to explain, before realizing that the bears were everywhere. We’d even chanced upon a bear karaoke bar the previous night. In the Chinese parochial imagination, thick guys come from the northeast, but I think Taiwan must be the true bear capital of gaysia.

I’ve been watching a lot of We Bare Bears lately so I would have loved to see three of them stack up like in the cartoon but maybe they save that for the bedroom. We took snaps with some of the furriest and plushest ones with our flag repping Shanghai. 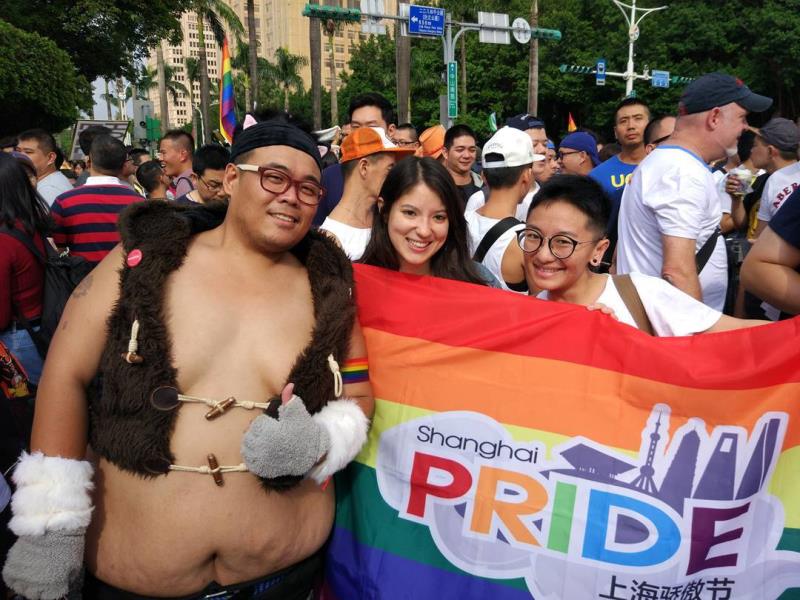 Shanghai Pride has been going since 2009 with a growing roster of events but there’s no march: That kind of public assembly is basically impossible in China’s political system. Being visibly queer is not such a problem but organizing is. On the other hand, Pride March in Melbourne, where I grew up, will turn 23 next year, but as with many bigger processions around the world, you have to register far in advance. One year I got into a confrontation with the guy who’d registered the student network because he said our placards on queer and trans refugee rights were “too political.”

Some marches around the world have turned into parades where corporations and even police forces flaunt rainbows while audiences gawk at the visual spectacle. Everyone is happy and glamorous and ideology gets truncated to telegrammic enthusiasm: Celebrate! 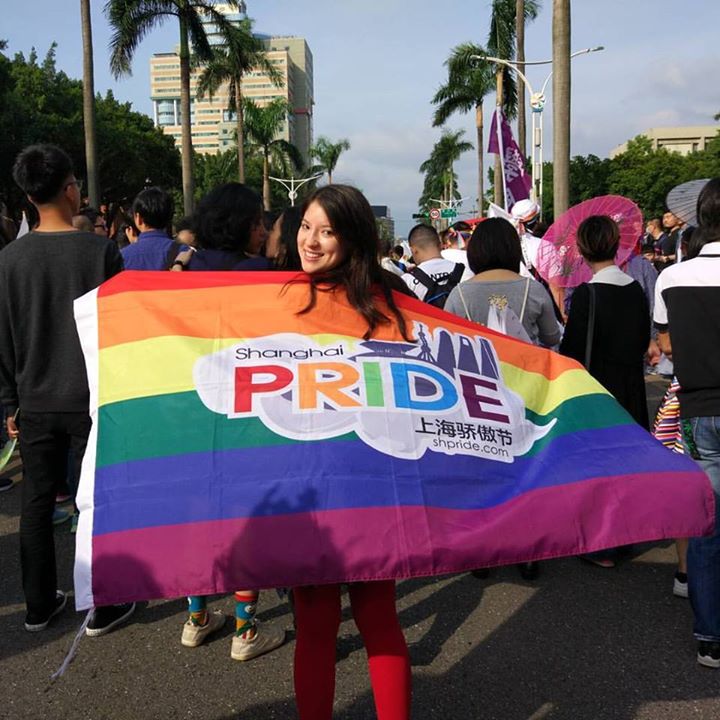 The Taiwan march was refreshing: Highly visible, explicitly political, and community driven. Anyone could just turn up – and there were plenty of unofficial delegations, like us, from all over Asia. We took the green route, which headed north past the ministry of education and part of Taiwan’s parliament. Organizers led chants from a tray truck: “Equal rights in marriage! Diversity in education!” Apart from a few people peddling rainbow gear and a couple of floats sponsored by businesses, the entire event was non-commercial and kind of lo-fi. “This is more like a rally than a parade,” Jessica said.

Once we got to the education ministry, the organizers handed out streamers for us to stick onto the gates. Ours identified us as parents supporting diverse sex and gender education. I was pleased to have suddenly sprouted offspring. 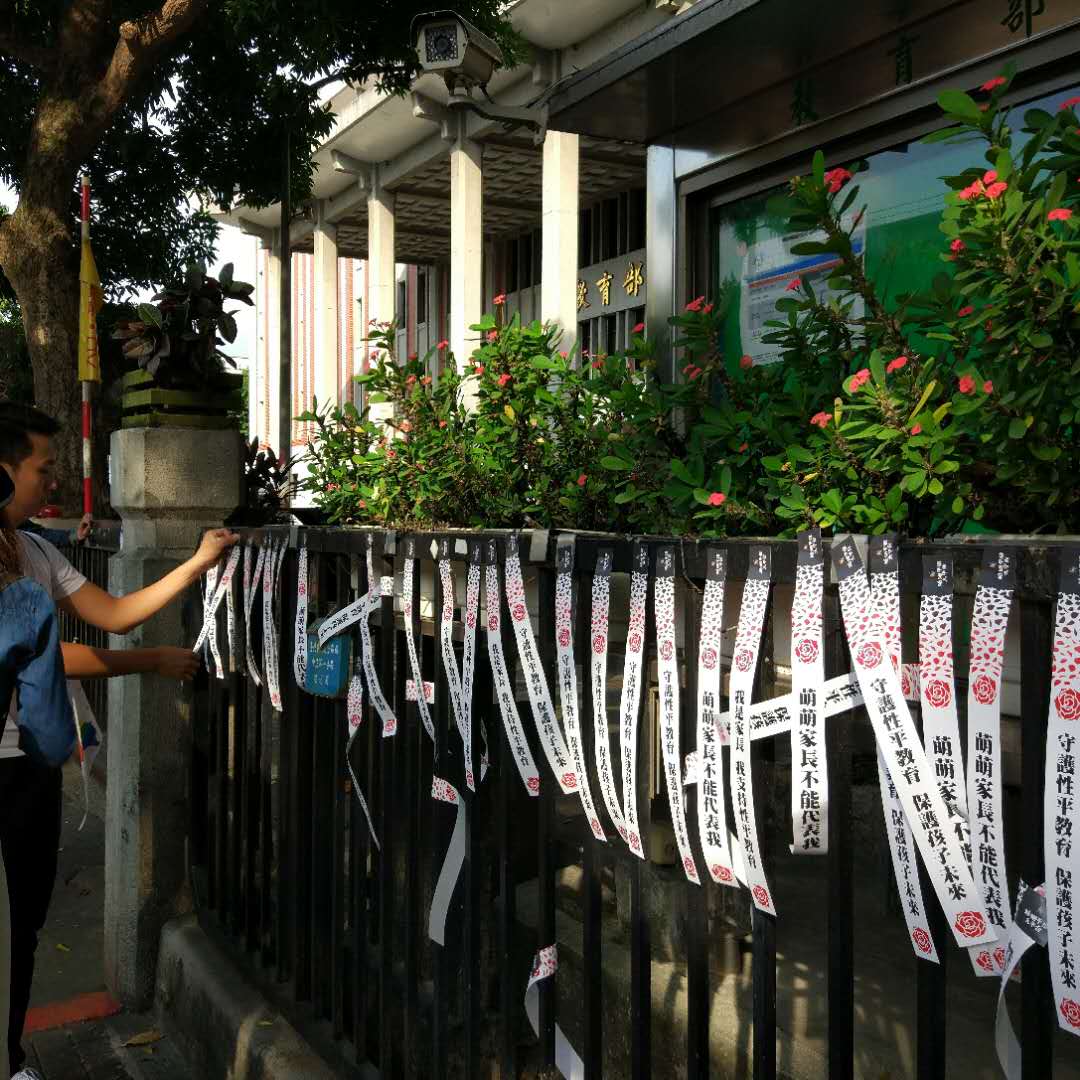 Along the way, organizers explained that the campaign for marriage equality needed to keep the pressure on, as the May ruling set out a two-year timeframe for same-sex marriage to be legalized but didn’t guarantee equal rights compared to male-female marriages. In particular, activists said, some proposed models would only give marriages legal effect in terms of migration and residency if a non-Taiwanese spouse was the national of a country that also recognized same-sex marriage.

“There are so many countries that don’t have same-sex marriage, especially in Asia and Africa,” one woman said over the microphone. “Do they only want us to marry Taiwanese people and Westerners?” 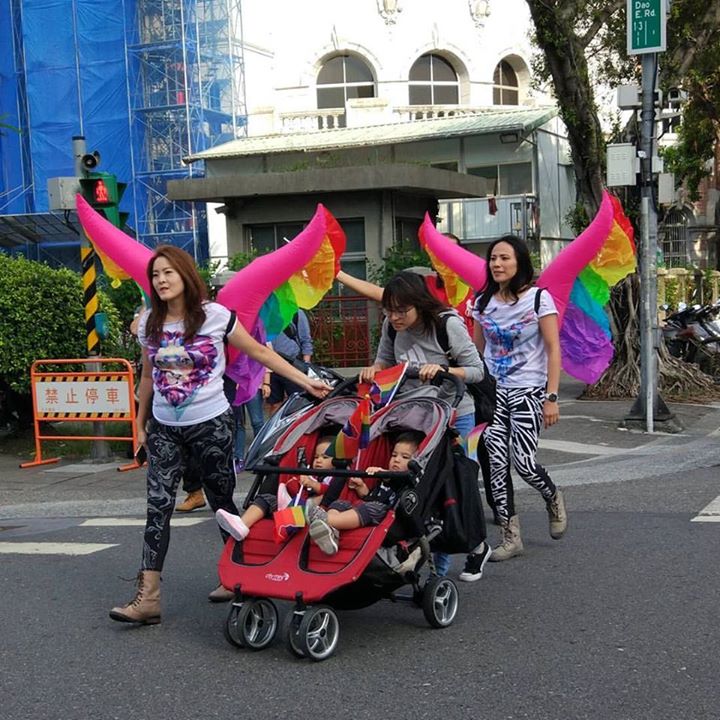 The march finished back at the starting point where a stage had been constructed for speeches and performances. All the speeches had live captions as well as sign interpreters who you could see on a big screen. Two teenagers spoke about their experiences, and a Christian talked about challenging homophobia in the church. 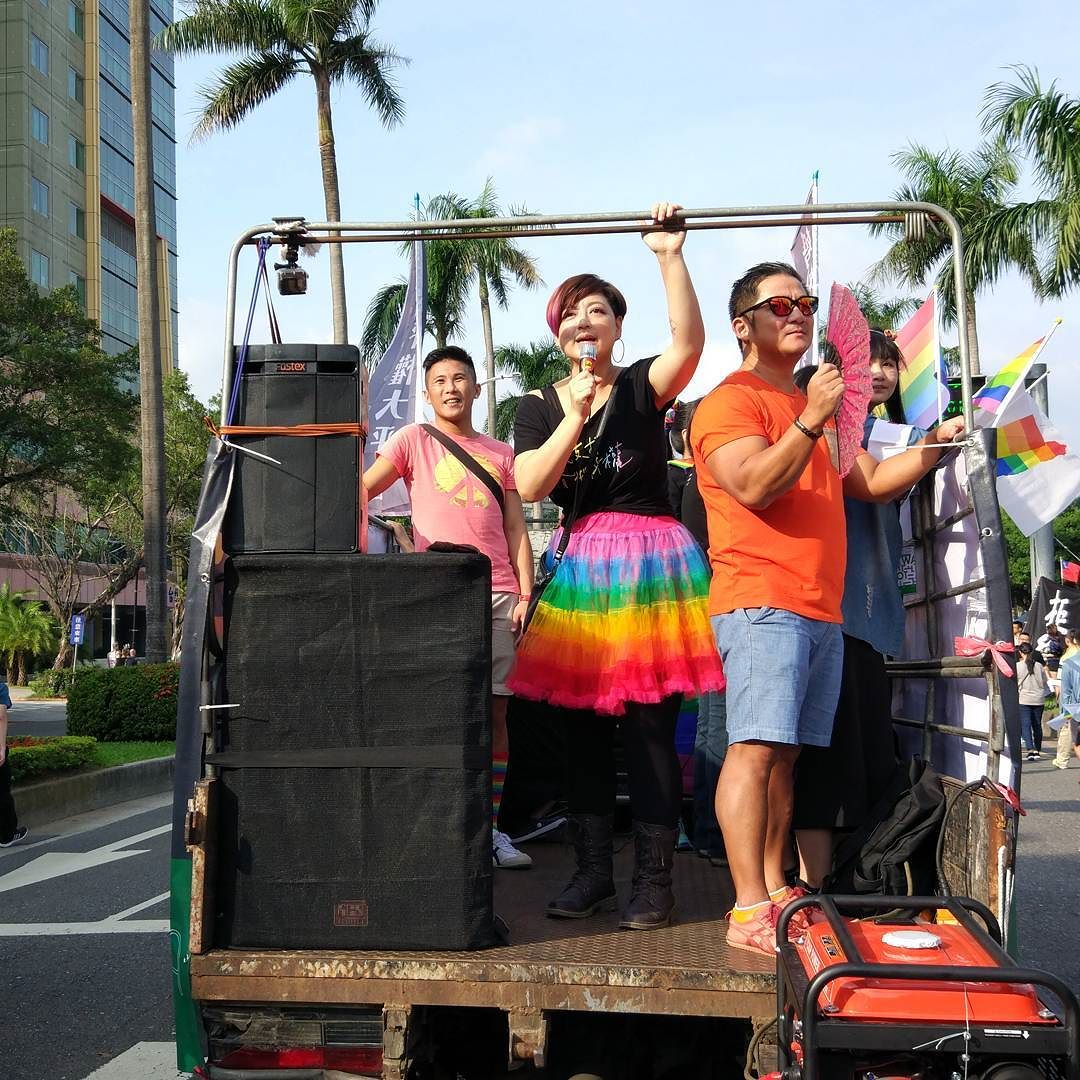 All in all, I got the big gay day in the sun that I’d been thirsting for, and a peek into one of Asia’s most exciting queer communities. It’s not just that Taiwan seems a step ahead in terms of certain civic rights – the May ruling in favor of legalizing same-sex marriage was the first in Asia – but that the whole movement feels a little bit more mature. Years ago when I interviewed a Taiwanese activist for a radio show I produced on queer cultural heritage in Chinese-speaking communities, she told me that we had to move beyond explaining that LGBTIQ people exist. 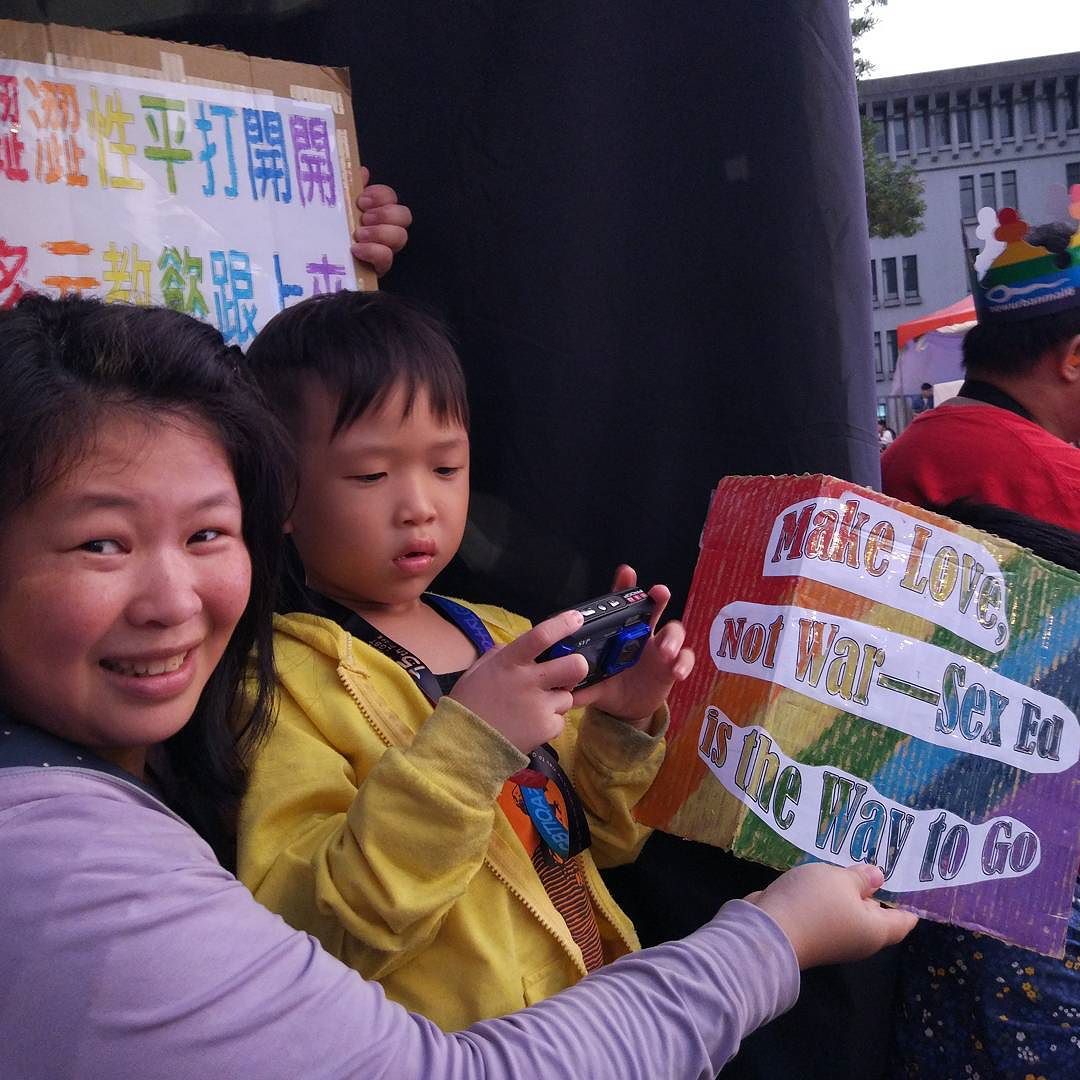 The mainland Chinese queer community is having some very important, productive, and challenging conversations: When I attended two LGBTIQ conferences last year in Chengdu, the capital of China’s southwestern Sichuan province, presentations covered topics as diverse as asexuality, trans welfare, gay aging, biphobia, and polyamory. But in mainstream spaces, it seems queers get stuck saying “we’re among you, please accept us.” Even in Australia, some gay and lesbian commentators have been gutless in the face of a transphobic backlash against LGBT progress, saying, for example, that marriage equality has nothing to do with bathrooms and sex education.

Seeing 110,000 people take to Taipei’s streets for a pride march that explicitly made diverse sex education its theme gave me hope for a more ambitious movement. Dream big, comrades: The future is empty and we are very, very brave. 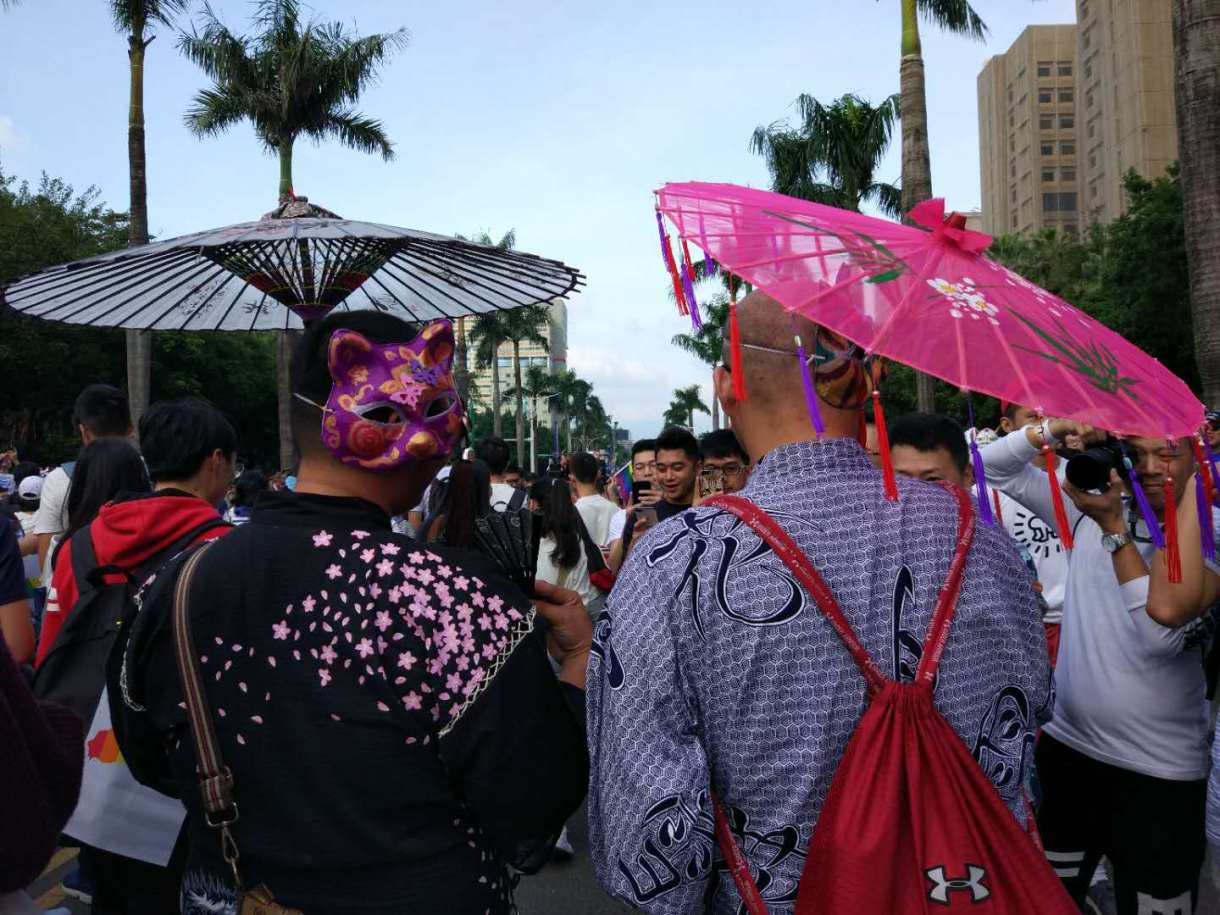 Jinghua is a Shanghainese writer who grew up in the Kulin nations. Ey edits news and fields assorted queeries at Sixth Tone, an English-language publication about China. Twitter.

Jinghua has written 1 article for us.