After college, on a whim inspired by the complete disintegration of all my plans and the recommendation of a half-Taiwanese friend, I ended up here. I didn’t know I was going until about nine days before I stepped off the plane, so I had no idea what the lesbian scene would offer. 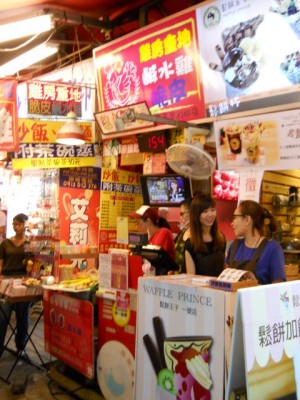 It turned out to be wonderful. Taiwan is a beautiful tropical island with an interesting mix of cultures and languages, as well as a large expat community. I’ve lived here since last September and I’m still discovering the crazy, wonderful city that is Taipei. Taipei has outstanding food, outstanding public transportation and outstanding lesbians. People here are really friendly (every time I’m lost, two or three people come up and help me figure out where I am).

*As a helpful tip for all you Anglophones, almost everybody speaks English, especially the younger people.

*Some of these sites are in Chinese! If you put the site HTMLs into google translate, google will translate the site for you.

*I’ve included stops on The Taipei subway system (MRT) for some of the places so that you can get an idea of where they are.

The Queerest of Areas

Red House
(MRT Ximen)
Easily reachable via MRT, Red House is a major shopping area and the location of the first gay bar in Taipei. The Red House was built in 1908; it’s a major historical land mark and the area around it has grown to include Thai restaurants and leather bars. There is also an excellent lesbian burger place in Red House called Cosbys. They have some of the best burgers around (well-priced and American style, which is hard to find) and they turn into a bar at night.

Shida
(MRT Taipower)
Many of the lesbian places are locacted within a few blocks of a small street/night market area called ShiDa. ShiDa Night Market is close to the two biggest universities in Taiwan (NTU and NTNU). It’s crawling with foreigners and young and fasionable college students. In the night market, you can get traditional foods like Stinky Tofu that are must-tries for Taiwan! Most stores pack it in around ten every night, but are open later on weekends. It’s a bright, hectic place filled with students, coffeeshops and small restaurants with every kind of food you can imagine, from Tibetan to Mexican (the last a great rarity in Taiwan). For traditional Taiwanese fare, go for the street food; it’s some of the best in Taipei. Try the shaved ice! And the dumplings! Actually, try anything people are lining up for. It’s an fascinating area of town and it’s within walking distance of The Love Boat, GinGin’s, Fembooks, The Hours, Witch House and Twiice.

Taboo
(B1, No. 90, Sec 2, Jianguo North Road, Taipei City)
This club is almost entirely lesbians; they charge girls 300-500 NT at the door ($10-15 U.S.) while men pay more. Taboo is an underground (literally, underground) club with live music on Thursdays and a small dance floor that doesn’t get packed until twelve. There are booths along the wall and and once you get in, it’s all you can drink. The music vaccilates between ordinary club music, Justin Beiber and Linkin Park, and the occasional menstrual pad commercial. The dance floor is filled with adorable butch girls who — and though most everybody is Taiwanese — you’ll probably be able to communicate with, even without much Chinese. If you know what I mean.

Twiice
(No. 222, Section 2, Jinshan South Road, Taipei City, Taipei)
This is a club where you can bring your guy friends, though they can only party on the first floor: the second floor is exclusively lesbian. It’s again, $15 to get in, all you can drink afterwards.

The Loveboat
(1F, No.11, Lane 240, Sect. 3, Roosevelt Rd., Zhongzheng Dist., Taipei City 100)
This isn’t so much a bookstore as a general store. The Loveboat has books, movies, rainbow wristbands, rainbow earrings and basically rainbow freaking everything. There are flyers for all the queer events happening in the area, as well as a huge wall of chest binders. There are also booths along the wall, one of which provides lesbian tarot readings. There’s a wall of super dapper tomboy clothes, The L Word with Chinese subtitles and even baby clothes! 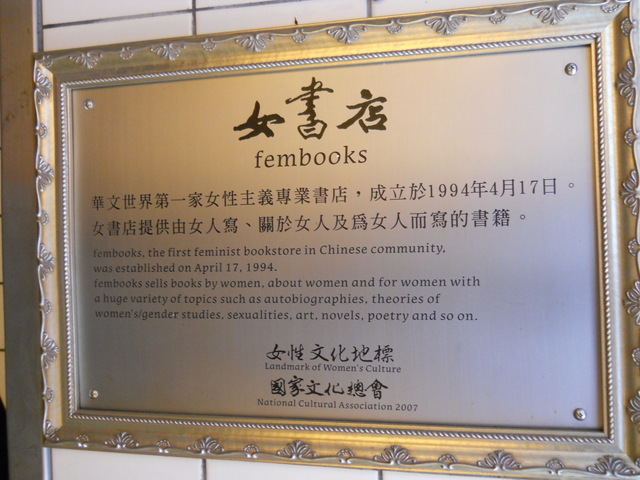 Fembooks
(No. 5, Lane 56, XinSheng South Road, Sec.3)
This bookstore is next to the lesbian cafe Witch House. Fembooks is on the right with nothing more than a sign and a small set of stairs leading upward to mark it as a store. It has all sorts of books on feminism, LGBT books, Chinese feminist writings and periodicals.

This is also the headquarters of the activist organization Gender and Sexuality Rights Organization Taiwan. According to the plaque on the stairs, it’s the first feminist bookstore in the Chinese community!

GinGin
(1F, No.8, Alley 8, Lane 210, Sect. 3, Roosevelt Rd., Taipei 100, Taiwan) (MRT Taipower)
This is an EXCELLENT bookstore. There may not be any English books but there are a ton of English movies. It’s directed more towards gay men, but there are a lot of lesbian movies in stock at fairly cheap prices. They have flyers for all the gay events in Taipei so it’s a good place to go if you want to be informed. Right next store is the H*ours Cafe. (This bookstore is conveniently about a block from the Love Boat!)

Eslite Books
(No. 245, Section 1, Dunhua South Road, Taipei)
For bookaholics who can only speak English, the largest, most widespread bookstore in Taipei is Eslite. It’s even twenty-four hours, for those 5am book-related emergencies! 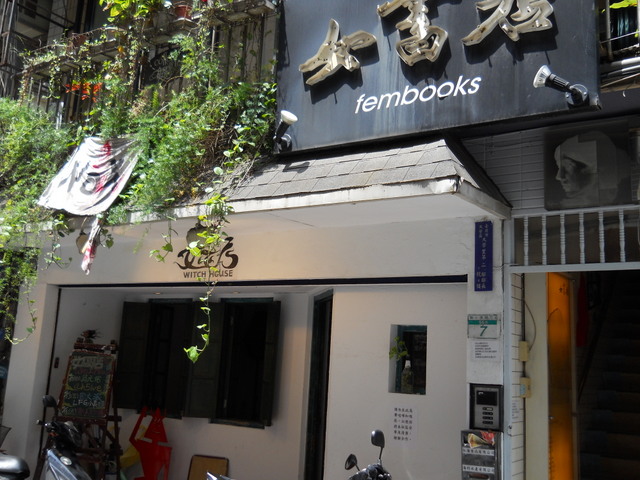 Witch House
(No. 7, Lane 56, XinSheng South Road, Sec.3)
At first, I was under the impression that this was only an awesome cafe where you could buy drinks, eat overpriced nachos that are actually just Doritos, and spend a few hours playing board games with your friends. Their menu is advertised as ‘the naughtiest menu in town’ and they have an extensive drink selection (HELLO blended fruit mimosas). But, they also have live music in the evenings AND, according to the menu, you get a ten percent discount if you can do twenty pushups on the floor. I think it’s time to go back to the gym. Did I mention their chairs are decorated with bras?

Hours Cafe
(No. 12, Alley 8, Lane 210, Roosevelt Road, Taipei City, Taipei) (MRT Gongguan)
This cafe is right next to GinGin’s and is owned by the same people. It’s a laid-back place with good drinks and a chill vibe. Lots of rainbows!

Norwegian Wood
(No. 9, Lane 244, Roosevelt Road, Taipei City, Taipei) (MRT Gongguan)
This is a indie cafe where a lot of college students study and converse. According to The Internets, it’s a gay hang-out spot, but it doesn’t particularly set off my gaydar. Either way, it’s fancy coffee in an artsy setting. As I would expect for a cafe named after a Haruki Murikami novel (or perhaps a Beatles song?), this place is whimsical, artsy and a bit weird. 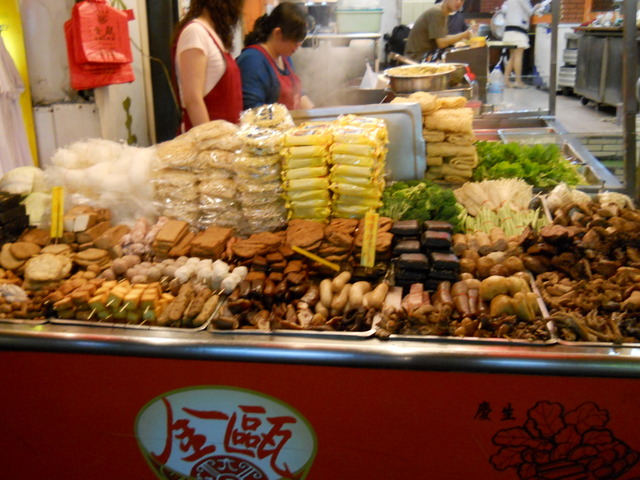 Lezmeeting
This is a once-a-month lesbian dance party that takes place in one of the popular clubs around Taiwan. There’s always excellent music, great dancing, and a plethora of lesbians! What more could you ask for? This company also runs a Chinese language magazine. Seriously, everyone should go to this. I’ve never seen so many lesbians in one place before.

The other big event is, of course, Pride. Taipei has the biggest Pride Parade in Asia. This year, 50,000 people showed up, myself included, and the parade filled the large thoroughfare. You can check out some great pictures on this radio blog. There were singing acts and a giant party afterward. If you’re around Taipei in October, you have to attend! 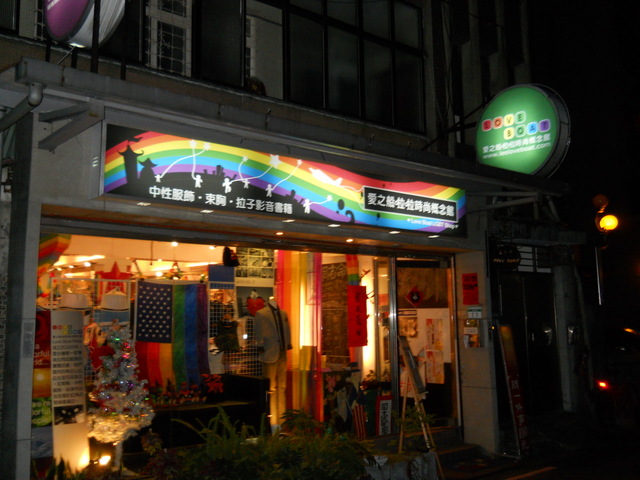 There are lots of activist groups in Taipei, but to join them, you have to be far more fluent in Chinese than I am (Also, if you come here on a work visa, volunteer work is technically illegal, though not impossible. Shhh!!) Events are staged, such as the Mass Lesbian Wedding of sixty couples in August. The two major groups are: Gender and Sexuality Rights Association Taiwan (GSRAT) and Taiwan Tongzhi Hotline

The laws here are fairly progressive, with protections against workplace and educational discrimination against sexual orientation. Marriage was proposed under the Human Rights Basic Law in 2003 but the bill stalled and has gone nowhere since. However, school textbooks now include anti-discrimination encouragement and the history of LGBT human rights.

One of the things you should know about the Taiwanese lesbian scene is that a lot of the girls are divided up into Ts and Ps, or Tomboys and Pos, taken from the Chinese word for wife. If you don’t fit into one of these conventions, expect to clarify your preferences at a club. It’s a lot like the stereotypical old school butch/femme divide in western culture. Tomboys usually date Pos. Not always and not everybody, but usually. Some of my more androgynous friends, or my femmy friends that like girly girls, have trouble finding girls who take them seriously. However, though it’s a little harder, it’s definitely not impossible.

Sometimes the gender roles are expected to carry over into the relationship, in terms of intimacy or who pays for dates. However, you can be very, very feminine and still get read as gay in Taiwan. It doesn’t matter if you’re in Taboo or just buying t-shirts, straight is not the assumption because there are so many very feminine, very lesbian women.

Tomboy Fashion stores
Like I said, Tomboys is a style (which is what many of the tomboys here emphasize to their families), high fashion, and a very big industry. As previously mentioned, the Loveboat is well-stocked with Tomboy clothing and accessories (nothing too kinky though).

Jung Shiao Shing Fu OBS & GYN
(No. 4, 5th floor, No. 128 Jung Shiao East Rd., Sec. 4, Taipei City) (phone: 02-2776-2222)
This is a gynecologist’s office where the doctors speak English. No one cares what your sexuality is, so no worries on that front. Also, health care in general is very cheap here, even cheaper if you have health insurance: we’re talking around $5-6.

Taiwan is fairly inexpensive, with rent for a one-bedroom ranging anywhere from $200-500. Food is pretty affordable, too. A meal at a restaurant might be $3 (Taiwanese food) to $10 or more (almost always foreign). Street food is ridiculously cheap and you can expect to be fully stuffed for $2 or less. Although Taipei is the most expensive city in Taiwan, the cost of living is still lower than most major cities in the US. The pay for professions such as teaching is very good. Overall, I think it’s very affordable.

Well, yesterday I kissed my girlfriend in front of my elderly neighbor (we mistimed the opening of the elevator doors) and she was totally unfazed. Everyone here seems to be accepting, for foreigners at least. While it might be different for people who have families here (I know a lot of people who are still in the closet), everybody I’ve encountered has been completely tolerant. According to the National Union of Taiwan Women’s Association, 75% of adults believe that homosexual relations are okay, so there’s that! I’ve also gotten zero street harassment here, which is significantly better than in Los Angeles.

For even more queer-relevant info on Taipei, visit the Information Library! Most of the websites won’t translate using my current browser, but from what I can figure out, there’s a ton of clothing stores, support groups, lesbian personals and a lesbian(?) church. It will take ages to explore everything in Taipei, so finding this resource was pretty exciting.

sign up for our newsletter
Related:Queer Girl City Guidetravel guide

Audrey has written 1 article for us.