Before my boy and I were full-time 24/7 live-in master and slave in a negotiated consensual power dynamic, we were long-distance lovers. One February, I visited him in at his family’s ranch in Texas for a week and had a serious revelation in my dominant life: I could use almost anything to beat him.

He had been out in the yard and wandering around the wild property and, on his knees, he presented me with a handful of canes he had found. Thin branches cut from brambles and trees, gathered from the underbrush. Switches.

Immediately, I had to hold myself back. I felt my inner sadist rushing out like a flash flood, and I struggled to remember the mantras of impact play classes. Only hit big fleshy areas. Breathe. Check in. Pay attention. Build slowly. But my sadism whispered louder: “You could beat him with anything. Literally anything. Like that… or that… or that.” 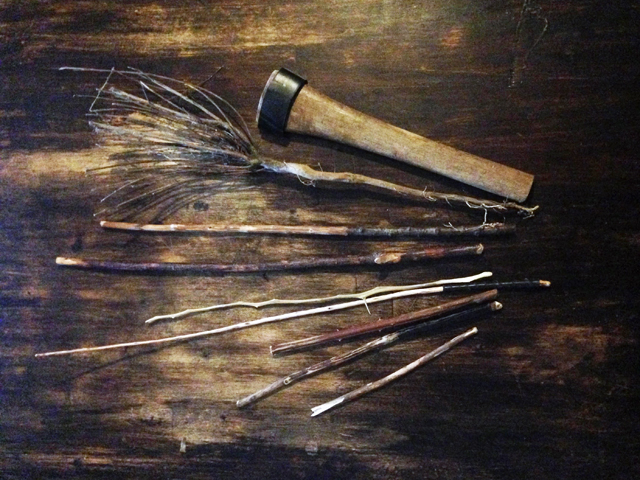 After he handed me these canes, and after I used them to beat him over the next few days, I marveled at the revelation: canes are sticks. Suddenly, I saw everything differently. The dowel that opens the venetian blinds. The scrub brush for the dishes. The paintbrushes. The thick lead rope for the horses. The stack of kindling for firewood. I could use anything as an impact toy.

I would look at him, then look around the room and get ten ideas for ways to bruise him right then. I felt dizzy with lust, with sadist thrill. I felt afraid of myself. What would I do? Would I completely lose control?

It’s not that canes are sticks was so far beyond me. I knew how canes are made; I’d heard the occasional thrilling story of a submissive told to go cut their own switch from the tree in the yard. I understood pervertables, household items that can become kinky. (Kitchen utensils are common favorites.) But it’s one thing to know something intellectually, and it’s another thing to understand it in my body, to feel it in my hands and heart and pants, and when that sweet boy handed me a bundle of canes-are-sticks and then, in the next breath, eagerly bent over the coffee table, it clicked.

I realized that I had never really let that knowledge, the mystical revelation that canes are sticks, sink in. I had taken dozens of BDSM safety classes by then; I considered myself a responsible and careful top and sadist. I knew I liked giving people intense sensation through impact play — preferably using floggers, canes, paddles and my fists, and sometimes through strap-on sex. I loved it when the bottom I was playing with cried, really broke down and released something deep inside; neither of us might see it coming but both of us would hold it preciously as we let it go. But as I was learning about how to top — how to hit and where, how to read body language, how to communicate actively, how to check in periodically without breaking the flow or energy — I got so tied up in safety and responsibility that I denied some of the impulses from my body, the cravings to grab for anything nearby and use it to make sensations in a lover’s body.

For years I was very pure about the objects I used. They were crafted for kinky impact play and nothing else. I rarely used pervertables. I kept my toys clean, neat, tidy and well maintained — and I used only those toys. I had rules about what was and what was not appropriate for me to play with — my way of putting boundaries on my sadism. And I think that was a deliberate, though unconscious, way to limit what I could use and what “safety” meant. I wanted desperately for this play to be “safe,” and to be a top who took safety and consent seriously.

My desire to hurt someone sometimes scares me. It feels endlessly hungry. I fear these impulses will override my own cognition and take on a life of their own. Putting limits on myself was a way to ensure I would not get carried away with my own sadism and actually hurt someone.

It was only after years of this that I let canes are sticks permeate and allowed myself to look around the world and see impact objects everywhere.

Now, I trust myself to have good communication skills, to not lose control and let my inner sadist take over, to not go too far. I’ve learned the foundations of topping and impact play, and I can trust myself to grab any ol’ object from my surroundings and torture him. And he has no qualms about being beaten with a branch he found in the woods, a stick he picked up from a creek bed, a blackberry bramble with thorns. His eagerness for whatever I want to do to him was new to me. I’m ever grateful for his trust, and continue to do my own part to earn and deserve it every day we’re together.

And now, that cutting board, that big heavy hardcover book, those rocks, that bamboo stirring spoon, that cat toy: all of them can be the foundation for our next scene.