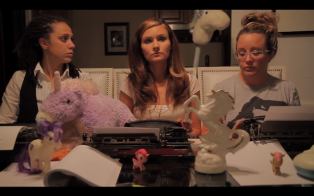 It feels like eons since we all gathered ’round the campfire to enjoy the Season One finale of the internet’s absolute favorite narrative lesbian webseries, Unicorn Plan-It.

Now Haviland, Sarah and Ashley are gearing up for a fantastic Season Two that guarantees to completely change your life, but they need your help to make it happen! They’ve made you a little video on this topic, but first a little rundown on the show:

This show is written, directed, produced and edited by Real Lesbian Females who want to make you laugh, make you proud of who you are and generally make your life better in every way. Who are these real lesbian females?

For Season Two, film-master K. Rocco Shields of Wingspan Pictures is joining the team as Director and Editor!

If you wanna dream a little dream of Unicorns, you should check out their Indie-a-go-go page and watch this video, edited by the aforementioned K. Rocco Shields.

If you contribute to Unicorn Plan-It’s fundraising campaign, there are heaps of fantastic prizes in store, including a role on the show, a Skype call with the cast, product placement for your brand or a personalized music video just for you (or another lucky lady in your life). Go now, go!