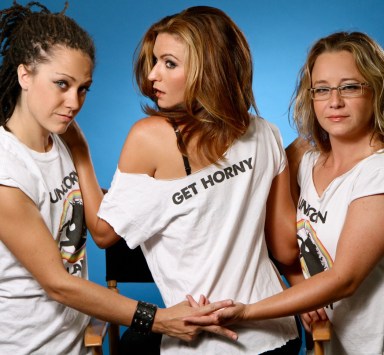 It seems like just yesterday that the beautiful ladies of Unicorn Plan-It first galloped into your life. But it wasn’t yesterday it was like, six months ago. Now it’s time to say goodbye (temporarily)! Luckily everyone still looks really nice and everyone has nice hair and is super funny. To keep that oh-so-fresh feeling throughout the off-season and encourage the ladies to keep on scissoring, get yerself a t-shirt.

If you’re new here, check out the first five episodes and then settle in for 6 minutes and 26 seconds of OMMMMM!

UNICORN PLAN-IT is a tight little comedy best described as Modern Family meets Kell on Earthmeets “a bunch of hot lesbians in West Hollywood.” Has anyone made a show about that last one?

This show is written, directed, produced and edited by Real Lesbian Females who want to make you laugh, make you proud of who you are and generally make your life better in every way. Who are these real lesbian females? Haviland Stillwell (TV/Broadway actress, recording artist, vlogstar, voice of Yasmin in THE BRATZ!), Sarah Croce (Actress, Miss April, Girl Talk, Fake-Whitney), Ashley Reed (writer, upcoming film HART’S LOCATION, once recorded a song for you), comedian Sherri D. Sutton and Amir Levi.