The University of Oregon in Eugene is a pretty fantastic place to be gay; winning a consistent five-out-of-five stars on the Campus Pride Campus Climate Index and boasting a thriving queer student community and Queer Studies program.

But this crazy-ass unacceptable shit happens, y’all, even in Eugene: over the weekend vandals attacked the University’s LGBTQ office with black spray paint, leaving a four-foot square swastika emblazoned on the carpet and spray paint all over the office’s TV and computer monitor. According to The Oregonian, there was no sign of forced entry and the office had last been used by Alex Esparza, co-director of the alliance, who locked the door when he left at 2:45 pm last Friday. The vandalism was discovered by a janitor at 1 A.M. on Monday morning. 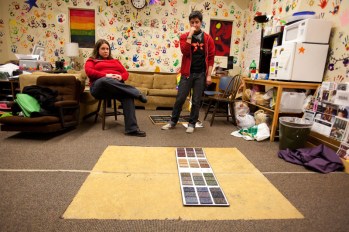 Photo by Ivar Vong for the Oregon Daily Emerald

LGBTQ Alliance volunteer coordinator (and Autostraddle Intern Warrior Princess) Vashti got a call Monday morning from a co-director. “My reaction was just shock,” Vashti remembers. “I didn’t really know how to feel or process what had happened. It was difficult for me to actually visualize anything like this. On my way to campus this morning, I started to get really nervous and apprehensive. I didn’t really know what to expect. Once I got to the entrance of the office though I was hit with this wave of emotional pain. I saw the swastika on the carpet and I felt like I had been kicked in the chest.”

In line with public perception, Vashti never felt much homophobia on campus. But the University has been under heat lately from students and in the media regarding The Pacifica Forum, a discussion group, led by 94-year-old retired University of Oregon progressor Orval Etter, which holds on-campus meetings though it is not affiliated with the school. (School policy allows retired professors to rent space on campus to hold events.) Identified as a white nationalist hate group by the Southern Poverty Law Center (“the most comprehensive and certainly the best funded study there is out there”), the group says it is intended to “generate intellectual dialogue about controversial racial topics.”

As reported in The US News: “The ASUO Senate has been arguing the merits of asking Pacifica to stop meeting on the school’s campus for the same reasons the SPLC called the forum a hate group: Many of the group’s regular members allegedly espouse anti-Semitic ideas. The group has also invited Holocaust deniers and neo-Nazi groups to campus.”

“It’s my understanding that during their meetings they have repeatedly addressed the LGBTQ community in a very negative, homophobic sense,” Vashti told us. “I know that one of their meetings a couple weeks ago they claimed that homosexuality is a psychological disorder and that all LGBTQ identified folks need to be institutionalized.”

Vashti explained: “Two weeks ago a resolution drafted by the Associated Students of the University of Oregon senate vice president, the student body vice president, and several other student senators was brought to the ASUO senate asking the Pacifica Forum to remove themselves from campus. The hope was that the senate would pass the resolution and in doing so take a strong stance against hate speech and in support of student safety.” 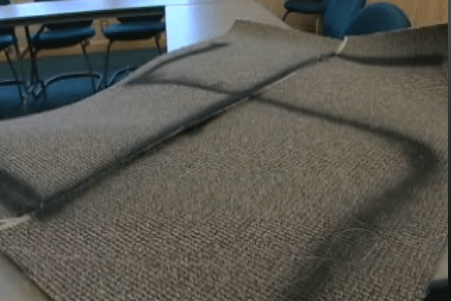 the carpet removed from the center, via Kezi.com

As reported by The Daily Emerald, “The resolution’s opponents said they were nervous that passing the measure would violate Pacifica Forum members’ First Amendment rights.” The Pacifica Forum insists that it is not a Neo-Nazi or white nationalist hate group, as it has been labeled by the Southern Poverty Law Center, and that it cannot legally be expunged from government property, although its meetings have been moved to the furthest possible end of campus amid the recent controversy.

Due to the Pacifica Forum’s affiliation with a former UO professor, the Forum is able to utilize university facilities free of charge, administration is working to rewrite policies regarding the allocation of funds and spaces.

Many students expressed fear of violence on campus due to the Pacifica Forum’s presence. The group, which has previously hosted discussions on topics including “Swastikas: A personal passion,” invited a controversial speaker in December who is said to have “blamed “Jewish lies” for the Iraq War, praised the swastika as a symbol of white people, showed a neo-Nazi propaganda video, and led several audience members in an enthusiastic Nazi salute.” 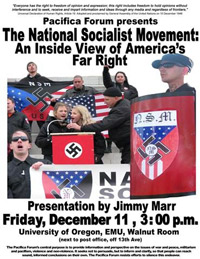 Partially in response to that discussion, the conversation was especially heated earlier this month when half of the attendees of “Everything You Wanted to Know About the Pacifica Forum But Were Afraid to Ask” were there to protest the event. Jimmy Marr, the Sieg heil guy, was there too; mocking the protesters in full Scottish regalia while delivering the salute over and over.

University Lawyers are currently reviewing the resolution to keep the group off-campus.

Vashti echoes these concerns: “As a self-identified queer woman of color, I feel very threatened by the presence of the Pacifia Forum on campus. They have directly targeted those three communities. I was in full support of the resolution and fully support the new resolution that will be presented this week at senate. If anything, the hate crime committed against my office (and as a result, myself) only further strengthens my support. I am not going to let these threats scare me. The people who did this need to realize that they can hate us, they can hurt us, they can say and do terrible things to us but we will not allow them to break us.”

Although there is no evidence linking the group to the vandalism, Alex Ezperaza told The Oregonian that “there was speculation that the vandalism might be linked to a recent discussion about the meaning of the swastika held by the Pacifica Forum, an outside group that meets regularly on the campus.” 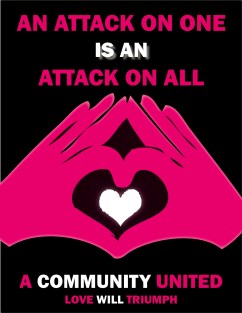 The Daily Emerald has the following quote from Pacifica Forum member Dawn Coslow, who condemned the act, but called its being linked to the Forum “ridiculous,” stating: “Any kind of hate crime is an absolutely disgraceful, despicable act, and I have sympathy for all the students in that office who have suffered this hideous act.”

Police have no suspects though they have removed the section of the floor where the swastika was painted for investigation, and the LGBTQ union has been covering the spot with posters. “People were coming in and out of the office all day filling out Bias Response Team report forms, signing posters that we have covering the area where the swastika was cut out and outside the office, and just showing up to show support and solidarity,” says Vashti. “I don’t want to speak for the queer community or the student body. But from what I observed today, we have received strong support from the other student unions, the student government, university administration, and the community at large.”

“I am extremely proud of the students who came out today and helped organize events for this week in response to all this. I am grateful to the administration and the university president for joining those meetings and speaking to the issue and actually taking a stance.”

The LGBTQ council spent the day with student union representatives, ASUO executives and other student leaders creating a plan of action. They’ve set up events, including a candlelight vigil for Tuesday where the students will walk through campus, concluding with speakers from university staff and faculty, community members, and any students comfortable with speaking out. On Wednesday students are planning a mid-day rally to raise awareness and give visibility to the incident. The students hope that one of the speakers for that event, which will take place on the main street of campus, will be secretary of state Bill Bradbury.

Vashti and her peers hope that this incident can be used as an opportunity to get important discussions started, bring awareness to the rest of the community and address the effects of hate crimes on campus communities and in general as well as to stress the idea that an attack on one of us is an attack on all of us.

“Personally, I’m angry,” Vashti says. “Plain and simple. I’m feeling so much rage. I was hoping never to experience something like this. And now I have. And it scares me.”