I first learned of the unexpected lesbian in An Unexpected Christmas when I saw a tweet come across my timeline from some straight mom somewhere in like Kansas screeching about how not even Hallmark Christmas movies are safe from The Homosexual Agenda anymore. Which is true in more ways than this woman could have known when she had her little Thanksgiving social media fit. In fact, An Unexpected Christmas wasn’t even on our radar because of all the other queer Christmas movies landing this season.

For example! There’s Carmilla star Elise Bauman‘s Under The Christmas Tree, coming to Lifetime. There’s Bomb Girls‘ star Ali Liebert‘s Every Time a Bell Rings, coming to Hallmark. There’s Tello’s new holiday rom-com, Christmas at the Ranch. Netflix’s 12 Dates of Christmas features a whole stocking full of bisexuals. HBO Max’s Santa, Inc.’s got Gabourey Sidibe as Goldie, an openly bisexual reindeer. Vh1’s got RuPaul’s The Bitch Who Stole Christmas featuring all drag queens. There’s even a Keira Knightley / Lily-Rose Depp holiday horror movie called Silent Night that’s gay and coming to theaters. Three years ago we had was Carol and that was it! 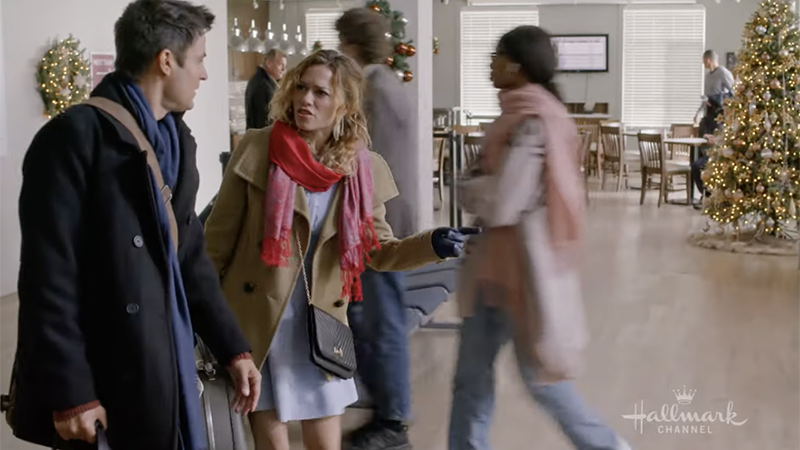 Should we do “body heat to stay alive”? 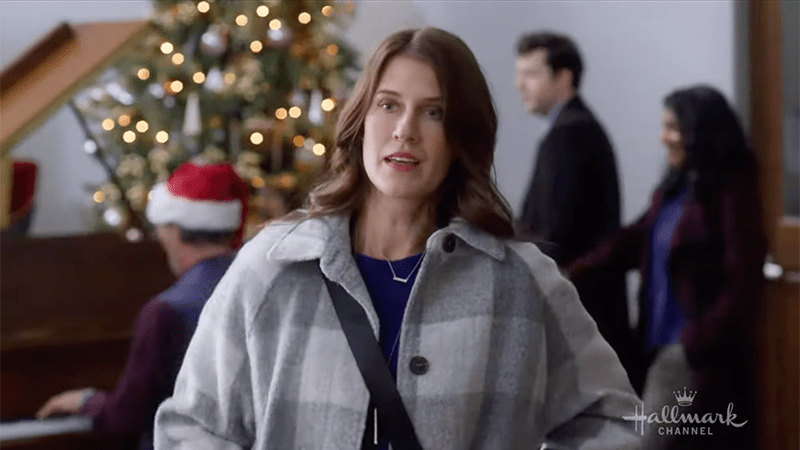 Absolutely not that’s our trope stay away from it!

Anyway I love unexpected lesbians, especially when they ruin Christmas for homophobes, so this little Hallmark ditty was a hit for me! It starts out with some straights, Jamie and Emily, stealing one of our best fan fiction tropes — fake dating! — as they attend Jamie’s family’s wholesome family Christmas good times. But that’s just whatever, because when Jamie and Emily get home for the holidays, we meet Becca, Jamie’s sister, who just happens to be a divorced lesbian and single mom who steals the show. She’s able to halt Jamie’s incessant whining with her wry verbal smackdowns! She’s got her own subplot and is more than just a sounding board for the main characters! And she has one scene with Jamie that actually made me laugh out loud for real!

Everything else in the movie is just copy/paste from other Hallmark holiday films, which is fine, honestly; that’s the reason people watch these movies. It also makes Becca’s unexpected gayness even more subversive. This was one of Hallmark’s first rollouts of the season, with no hint of the queer subplot. You’ve got suburban Christian moms in middle America dozing on the couch to the tune of jingling bells, leftover turkey tucked into the fridge, when out on the rooftop, what should appear? LESBIANISM!

And actually, Becca’s not even the biggest surprise of the movie, but I don’t want to spoil that for you. I mean. I do. But I won’t. 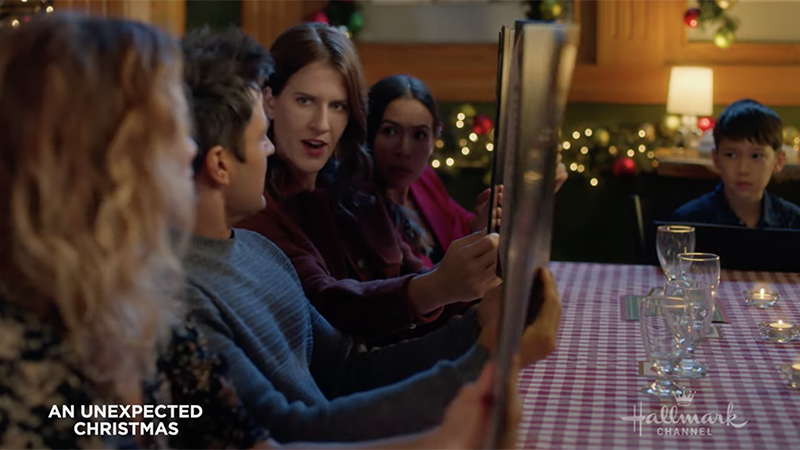 There is not one single vegan option on this entire menu, you hetersexual monsters!

My favorite thing about Becca, though, is that she’s single. There’s kind of a wink toward a romantic connection, but it is by no means the center of her story. Well-written single lesbians on TV are almost as rare as Rudolphs, and with the holidays already orchestrated to make single people — especially single queers! — feel weird, it’s actually really nice to see some happy single rep out here!

An Unexpected Christmas has already premiered on Hallmark, but it will air again about three hundred more times this December, including tonight at 10pm.