Look, it’s true: haters gonna hate. For a while.

According to a recent study by the Southern Poverty Law Center, the number of extremist hate groups in America has grown “explosively.”

I didn’t know exactly how to break this to you, so here are some more facts:

The study (which you can read in full here!) counted hate groups across the United States – and has found over 1,000. The number of groups has rapidly increased since 2008. These “active extremist groups” are often militias that “think the federal government is their enemy.” This may sound familiar, or in fact like a fairly legitimate political party. AHEM.

Most of the groups counted believe that the federal government is conspiring to “take away their freedom.”

The explosive growth seen in 2009 continued into 2010, and now the count is higher than it has ever been. The SPLC focuses on extremism and cites the following reasons for this alarming increase in angry people in the U.S.:

For most of us, I’m sure the idea of an extremist group isn’t new… 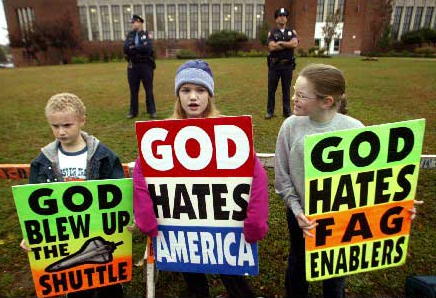 But this report means people will finally be talking about it – even people who never listened last time. Hopefully this report will open eyes about hate groups. NEW EYES.

So, actually in news today: people are finally pulling hateful extremists out of the shadows. (Oh my god, 1,000 groups? Where do they even find the space to hide?)

And maybe more heartening: in general, organized hate groups are a reactionary response to social change. [See “changing racial identity of the US,” above.] The similarly explosive growth of the KKK in the 1860s was tied directly to Emancipation; no one’s arguing that the KKK’s existence is a good thing, but the lasting effects of the end of slavery have been better for America than the lasting effects of the KKK have been bad.

This isn’t the beginning of a new era of militant social conservatism in America; despite what the House of Representatives is trying to tell you, this is its death throes. So be careful, and get out of the way so you don’t get hit by a flailing limb, but don’t get too worried either. There are more of them, but they’re also sloppier and more desperate: for instance, take the Westboro Baptist Church’s weirdo ideas like protesting Lady Gaga concerts. Extreme, yes, and bizarre, but more pathetic than dangerous. The bottom line: militant extremists are always motivated by fear. Let’s make sure they’re more scared of us than we are of them.