After a very bloody year for the United States transgender community following the still-unsolved murder of Islan Nettles in New York, Detroit Police are advising the local LGBT community to be extra vigilant after recent two attacks on trans women. The incidents occurred near Woodward Ave between Six Mile Road and Seven Mile Road in Detroit’s Palmer Park neighborhood, historically known for its large African-American LGBT population. According to police, on the evening of August 15th, a transgender woman and a 42 year old man were shot by an unknown assailant. The shooter fled in a car which was then involved in a rollover accident, but escaped on foot. The trans woman was transported to a local hospital for treatment and survived, but the 42 year old male died from his wounds. On August 18th, another trans woman was shot in this same area, and also survived. According to Sgt Michael Woody with the Detroit Police department, the 42 year old man who was killed was not believed to be a member of the LGBT community. He went to state that both attacks are being investigated as possible hate crimes, but it is not known at this time if the shootings are related. Police are speaking to a person of interest about the attacks, but currently have no suspect. Police are not releasing names of the victims citing their desire for privacy, and notification of the next-of-kin for the man who was murdered.

These are not the only attacks on members of the LGBT community in Michigan in recent months. In June of this year, following Motor City Pride, a 20-year old Christin Howard was badly beaten by a group of young men for being gay, and his attackers recorded the violence on their cell phones. In April of this year, a young queer woman was beaten in Ypsilanti after being recognized by her attackers for appearing on TV during the brief rush of legal gay marriage in Michigan. And last November, another transgender woman was found murdered and dumped in a garbage can in the same Detroit neighborhood where this week’s attacks occured.

Unfortunately, as is all too common in crimes against transgender people, the local media coverage of these attacks has been both slow and almost farcically bad. The first Detroit media outlet to cover these attack was WXYZ-Channel 7, who broadcast their report on August 20th. In it, reporter Jim Kiertzner describe all three victims (including the individual who lost his life) as “transgender men” and goes into some length about the history of prostitution in that area, even though Detroit Police were clear that there was no evidence to support that the individuals attacked were sex workers. When contacted, WXYZ News Director Dave Manney stated that Kiertzner was only reporting information provided by Detroit Police, and pledged to update his stations coverage as soon as the new details were confirmed with police. As of publication, WXYZ has updated the wording of their story on the website to reflect the fact that the victims were transgender women and had removed the video of the broadcast story. Manney pledged that efforts would be made by the station to comply with the GLAAD Media Guide when covering LGBT-related news. 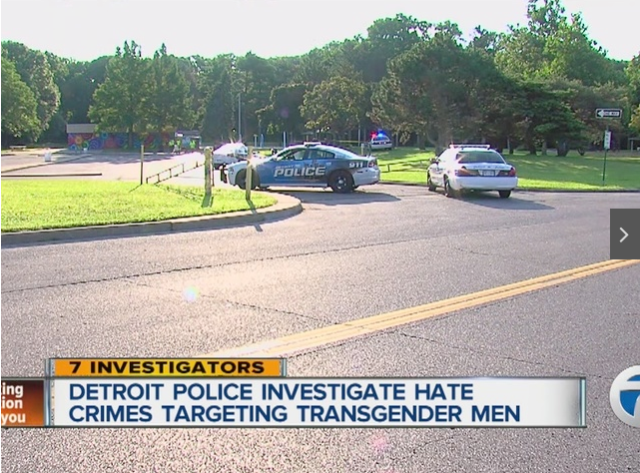 Sadly, WXZY represented by the far the best case scenario when it comes to the coverage of this case in broadcast media. WJBK, a local Fox affiliate, broadcast their story on August 21st, nearly a week after the first shooting occured. In in his video segment, reporter Ron Savage refers to the victims repeated as “men” or “men dressed as women,” but never once as “transgender women.” To make matters worse, Savage also grabs tightly onto the prostitution angle, including speaking to a local cab driver and a local mother, about prostitution and drug-use they had observed in area. Again, when the police were contact for comment, they stressed that they did not believe the victims were involved in prostitution or that drugs were a factor in the crime. And, just when it feels like Savage’s segment couldn’t possibly get any worse, he invokes invokes the age-old “trans panic” trope. He plainly states: “The cab driver says he’s familiar with men seeking a female prostitute only to be unpleasantly surprised to discover the person they believed was a woman is, in fact, a man.”

Implying that trans women are men who are trying to deceive others is appalling and borders on hate speech, and it has absolutely no place in a news report. These women were shot, by Savage’s own admission at the end of his segment, while simply walking down the street. Yet, in his two-and-a-half minute segment on this crime, Savage spends nearly two entire minutes discussing prostitution in the area from information gleaned largely from speaking to a cab driver. He couldn’t even be bothered to provide the Detroit Police Department’s tip line for those who may have information about the attacks on these women, nor to pick up a phone to discuss the attack with any number of local LGBT advocacy groups, one of which is three miles away from where these attacks occurred. The entire report is little more than a sensational character assassination of two women whose only crime was to be shot while walking. It is the basest, most unprofessional reporting, usually reserved for the likes of tabloids. WJBK owes the transgender community a significant on-air correction and apology. WJBK’s news staff and management were contacted repeatedly for comment on their coverage, but refused to speak with Autostraddle.

When it comes to local newspaper coverage, the results are also mixed. The Detroit Free Press’s Gina Damron was the only local journalist to get all essential details of the case correct on the first try. In her brief article dated August 21st, the women who were shot are correctly gendered, the known facts provided by police are presented, and no implications of prostitution are made. The Detroit News’ Tom Greenwood is another story, though. Greenwood’s piece, also dated August 21st, refers to the victims are “gay or transgender men.” Fortunately, he at least manages to avoid implying that the victims may have been sex workers.

Terrible coverage of anti-trans violence is the norm, not the exception. Frequently, trans people targeted for violence are misgendered by reporters, are referred to by the wrong name, have their arrest records unnecessarily revealed, and are portrayed as partly-responsible for the the violence they’ve endured. Given that trans people already face disproportionately high levels of violence, and extremely levels of discrimination, it’s both cruel and unprofessional for the news media to treat them as spectacles for the sake of readership or ratings. Given that GLAAD has issued a very clear guide for handling just these situations, any news organization that claims ignorance on how to handle new items involving transgender individuals is either lazy or willfully exploitative.

Even if these two women were sex workers, they certainly did not deserve to be shot, and they definitely deserved far better treatment of their story from the local media than they received. Being trans is not a justification for violence, nor is being a sex worker. Not all trans women are sex workers, and it’s a sexualizing stereotype to assume that they are. Trans women are people, and they deserve the same respect when they are attacked as any cis person, including not having their characters dragged through the mud, or being blamed for their own attacks. Underneath all their victim-blaming and trans panic, the media seems to have glossed over the essential facts:  two women were brutally attacked in Detroit, and their attacker is still at large.

Detroit Police are asking that anyone who may have information about these attacks to please come forward. You can reach their confidential tip-line at 1-800-SPEAK-UP.