As LGBTQ activists warned, Trump’s presidency is developing dangerously for LGBT people, particularly the most vulnerable among us. Although Trump avoided saying much about his specific policy plans regarding trans people on the campaign trail, his choice of AG Jeff Sessions made the administration’s real agenda clear.

One of the first actions the administration took under Sessions’ leadership was to backpedal on an effort the Obama administration had in place to advocate for trans students. Under Obama, the Justice Department had been appealing a court injunction that prevents trans students nationwide from accessing the bathroom or other facilities consistent with their gender. Under Trump and Sessions, the first order of business was to cease that appeal, and to allow a lower court injunction to harm trans students unopposed.

This move doesn’t put into motion immediate changes; since the previous appeal was against an injunction already in place, all this means concretely is that things remain in place as they have been. But as Mara Keisling of the National Center for Transgender Equality told the New York Times, “While the immediate impact of this initial legal maneuver is limited, it is a frightening sign that the Trump administration is ready to discard its obligation to protect all students… Transgender students are not going away, and it remains the legal and moral duty of schools to support all students.”

In addition to a documented history of being virulently racist and attempting to block voting rights for Black Americans, Jeff Sessions has also demonstrated patterns of bigotry towards LGBT people and particularly trans people. He tried to prevent an LGBT conference “under a state law passed in 1992 that made it illegal for public universities to fund in any way a group that promotes ‘actions prohibited by the sodomy and sexual misconduct laws,'” in 1996. He’s voted for the anti-LGBT option on issues ranging from anti-discrimination laws to marriage equality, and supports a First Amendment Defense Act, which would allow taxpayer-funded organizations to discriminate on the basis of religion.

As S.E. Smith writes at Bustle, “Sessions tried to dodge around a lot of questions surrounding trans issues,” but is on the record as opposing the Violence Against Women Act, which helped provide funding for assault survivors specifically including trans people, and opposed ENDA, which would have extended nondiscrimination protections to trans people. In short, it’s no coincidence that a Trump/Sessions administration has prioritized this move, and we can expect to see more targeting of LGBTQ and specifically trans people in the future.

In light of that fact, many are concerned about the upcoming Supreme Court hearing of the case of Gavin Grimm, a 17-year-old high school student who filed a lawsuit with the help of the ACLU regarding his rights to use the bathroom as a trans student. He had been required to either use the women’s bathroom or a single-stall private restroom at his school, in accordance with their restroom use policy. His case will be heard by the Supreme Court on March 28, and no one really has any idea what the Supreme Court will look like at that point. It’s possible that the Democrats will manage to block Neil Gorsuch’s nomination to the Supreme Court bench until after that date, in which case Grimm’s case will be heard by eight justices instead of nine, and there’s a possibility that the court will be split, or tied, with a 4-4 vote. 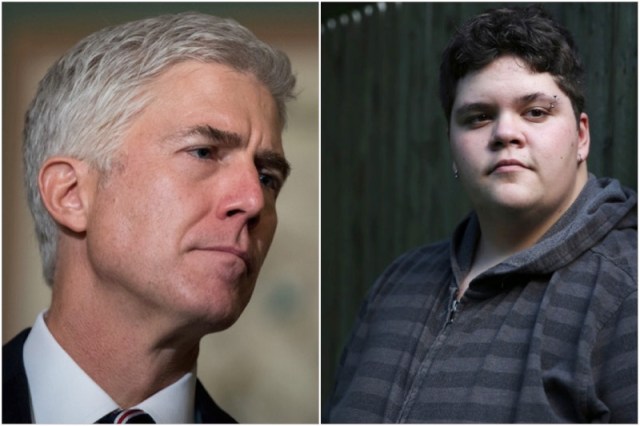 If that were to occur, the previous ruling on the case from a lower court would stand — in Gavin Grimm’s case, that would mean that a 4th Circuit ruling in his favor would grant him the rights he’s fought for. But a split vote means that the case doesn’t form lasting legal precedent the way that a majority victory in a nine-justice court would; Grimm’s victory would apply only to Grimm, and not other trans students.

Of course, whether with an eight-justice or nine-justice court, it’s also perfectly possible that Grimm’s case will outright win or lose. In those cases, it would set a major legal precedent — Grimm’s case is predicated on the interpretation of Title IX as protecting trans students’ rights that the Obama administration had been having the Justice Department defend, and the ruling would be hugely influential in future legal cases involving discrimination against trans people. It makes the question of whether Neil Gorsuch will be confirmed to the Supreme Court by March 28 even more fraught; although Gorsuch is something of a dark horse on LGBT issues specifically, the Williams Institute has looked into previous cases of his that may shed light on how he would rule on Grimm’s case, and the outlook isn’t good.

–Kastl v. Maricopa County Community College District, 325 Fed. Appx. 492 (9th Cir. 2009) – Judge Gorsuch, sitting by designation on the U.S. Court of Appeals for the Ninth Circuit, joined an unpublished opinion that, while recognizing that a transgender person can state a claim for sex discrimination under Title VII based on a theory of gender stereotyping, ultimately ruled against the plaintiff. The employer had barred the plaintiff from using the female restroom until completing gender-confirmation surgery. The court held that “restroom safety” was a non-discriminatory reason for the employer’s decision.

It’s important to remember, though, that while things look scary at the federal level, there are people doing vital work to support and protect trans people at the local level, as there have always been. For one thing, if the Supreme Court ruling doesn’t set a legal precedent that shuts down a trans-inclusive Title IX interpretation, lower courts may still use it in rulings at their discretion even if the Obama administration’s guideline on it is no longer in place. Trump has claimed he’ll take an approach of “leaving it to the states” on trans issues, which is a step backwards from the Obama administration’s relative support of trans people on the federal level, but means that local activists can focus their efforts on blocking their state governments from enacting harmful anti-trans legislation or forcing them to repeal it where it’s already been written into law, as is being attempted with HB2 in North Carolina.

This week Governor Roy Cooper proposed a “compromise” which would repeal HB2, require local governments to give 30 days notice if they’re going to pass a nondiscrimination ordinance (HB2 was originally passed in something of a punitive measure when the city of Charlotte passed a nondiscrimination ordinance), and “tougher penalties for crimes committed in restrooms and dressing rooms.” Republicans have so far been disinterested in the compromise because compromise isn’t really their thing, and opponents of HB2 say that it’s too weak and plays into harmful fears about trans people.

[Stephen Peters, a spokesperson for the Human Rights Campaign] said his group objected recently when Cooper consulted them on the proposal, arguing language about restrooms responds to a problem that doesn’t exist. “The reality is the folks at risk in bathrooms are transgender people,” Peters said by email, adding that “this proposal claims to answer a baseless question. It’s unnecessary at best and damaging at worst.”

Nearly 800 parents of transgender children have written a letter to Trump demanding that his administration protect and serve their kids. “You promised to be a president for all Americans,” the letter reads, “but less than 48 hours after Jeff Sessions was confirmed as Attorney General, the department of Justice took a concrete step to undermine equality for the LGBT community.” Will Trump listen? Almost certainly not. But it’s a reminder that there are many people out there who are determined to fight for trans people’s safety and civil rights.