Once again it’s Trans Day of Remembrance and once again I’m writing that it’s been the deadliest year on record for trans people in the United States. It can be an especially sad and difficult and lonely day for trans people, and especially for Black trans women and other trans women of color. On this day each we’re reminded how many people and how many societal forces and institutions are stacked against us and how much damage they can do. This year we’re reminded that the majority of voters decided to elect a government that has tried and, in some cases, succeeded, in passing laws that prevent us from using bathrooms, going to school, serving in the military, and finding housing and jobs.

There have been twenty five trans people murdered in the US this year. That’s cruel. That’s evil. That’s miserable. It’s impossible to make it through a year like this alone. For those of us who have lived through this year, we’ve had to rely on the love and help and support of our chosen families to make it as far as we have. Chosen family is important to all queer people, and for trans women of color, it’s often the difference between life and death. Here are a few of the trans women I know and love expressing how chosen family has helped them this year. 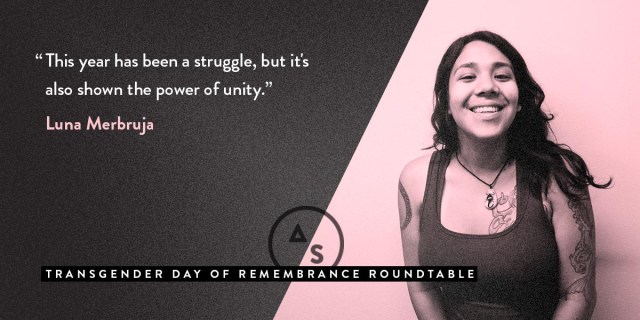 This year, so much has been taken from us. It feels like the barrage of political terrorism and natural disasters have revealed a new apocalyptic world that’s been brewing for the past decade. I couldn’t have made it without the wisdom of my professor Lara Kiswani who broke down each executive order in our Grassroots Organizing class and taught us ways to resist, or the crew of neighbors who helped me move when I was violently evicted from my first home, or my partner who has loved me through every emotional breakdown I’ve had this year. This year has been a struggle, but it’s also shown the power of unity.

This unity has created many sacred experiences. I have been blessed to co-facilitate a room of trans women of color writing jokes and laughing together, who performed magnificently in Peacock Rebellion’s Brouhaha. I have sat in a room of QTPOC survivors of child sexual abuse and we spent two entire days together dreaming, healing, and paving our pathway to liberation. I have traveled to Mexico (twice!), had two separate short stories published in trans anthologies, and stayed in therapy all year. As much as the world feels like it’s falling apart, I also know that we are healing and living liberation, too. 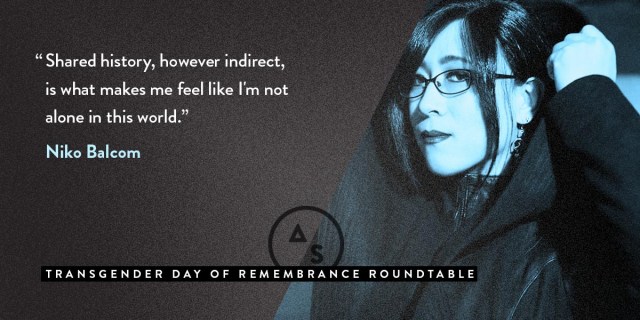 Honestly, I’m not even sure where to start with family right now. Family is advertised as this fucked up notion, that if you’re blood related, things are all sunshine and rainbows… and, well, I’ve never really been able to participate in this. Being adopted is weird. Someone basically buys you, and then you’re family? Growing up, I guess it was kind of sunshine and rainbows, and since I arrived on Christmas day, this time of year has an extra layer of special (it’s kind of like a birthday, but not really?). Childhood ignorance is real. Skip ahead tens of years, add a lot of experiences, several identities, multiple levels of awareness, and now chosen family is everything to me. I still don’t really know how to define family, or at least how I define it, but the closest I can come is the people that make me feel safe; the ones I can relax around. Unsurprisingly, it’s those that have the most shared experiences with that set me at ease. Just being near other queer people, other POC, or other trans women, gives me strength. Shared history, however indirect, is what makes me feel like I’m not alone in this world.

I’m constantly struggling with what family is. I’m told that I’m supposed to love my parents, but how do I do that when they vote against my basic rights in this country; when they don’t see the systems that oppress me, my communities, and the people I love. Is it my duty to love them, and be their child, because they adopted me? I don’t know. I feel like I owe them some sort of debt for adopting me, but I don’t even know what my life would have been like had they not, if I grown up in Korea. Societal notions of family are complicated, and they leave me feeling a bit empty distraught. What isn’t complicated are the people that I can relate to, the ones that occupy the space at the center of the Venn diagrams of my identities. I guess what it comes down to, is that family seems to be the group of people that you have shared experiences with, and if you can have that with people you’re blood related to, great? If you can’t, that’s great too. I have managed to find family in the queer, POC, and trans communities, and I’m happy with that. So, thank you for making me feel like my existence matters, and thank you for being my family. 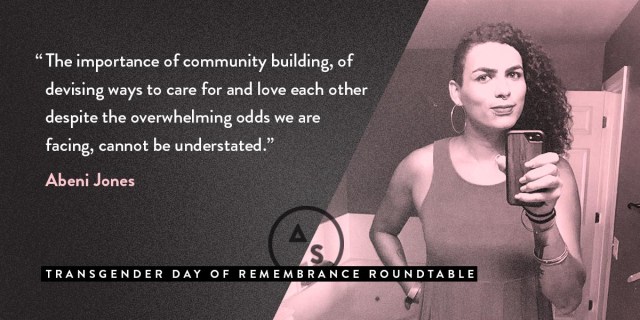 When I was at my most miserable, suicidal and hopeless, one friend who me crying on the couch and asked what I needed. I didn’t reach out. I didn’t call my father. It was my best friend, my former lover turned sister, who saw my distress, reached out to me, dropped what she was doing, bought me cat food, and then drove me to the ER.

I made a choice to invest in building deep, intimate, familial friendships with other Black queer and trans people, and I’m here as a 30 year old gainfully employed Black trans woman because of it. The importance of community building, of devising ways to care for and love each other despite the overwhelming odds we are facing, cannot be understated.

I am one of the lucky ones, in that my biological family supports and affirms who I am and what I’m about. But it’s my chosen family, the community members with whom I build and grow on the ground, who are the ones that not only saved my life but give me life, who encourage and support me, who gas me up, give me hope when I’m at my last thread of sanity, who have always been there for me and for whom I will always be there. 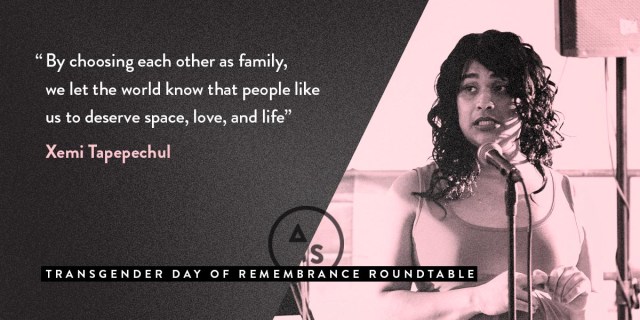 Without my QTIPOC community I would probably not have life. I would have starved. I would’ve frozen out on the streets. I would’ve killed myself. I would not be here today. Because of my QTIPOC communities’ protection, I am able to breathe today. My name is not being spoken along with the other siblings that have been taken from us. This family I have chosen, which includes my Two-Spirit Siblings in DC, my spouse in New Jersey, and my online community, has uplifted me when I was at my lowest. They have blessed me in ways unimaginable.

Lately, binarism has really been triggering my dysphoria. The need to pass, the automatic othering within all binary communities, and the self-disgust has really hurt my self-image, and has led me to make changes to my physicality. Despite this dysphoria, my QTIPOC chosen family has continued to support me, respect me, and uplift me. That’s what we have to do for one another. The world wants us to hate ourselves. By living in our truth, we inspire others to do the same. By holding space for one another, we inspire each other to grow. By choosing each other as family, we let the world know that people like us to deserve space, love, and life. 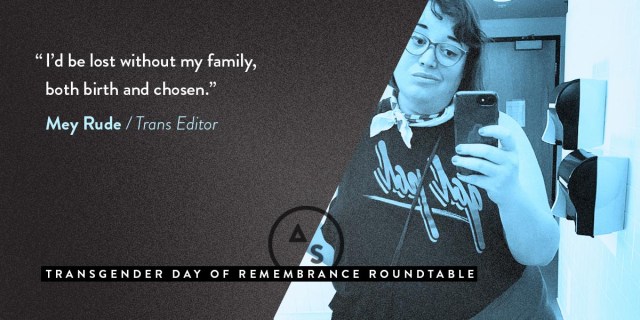 This summer I got a tattoo that says “How can we not talk about family when family’s all that we got?” They’re some lyrics from the theme song to the seventh Fast and Furious movie, but they also mean so much to me. I’d be lost without my family, both birth and chosen. It was my family who supported me when I came out. It was my chosen family of trans people I had met on Tumblr who helped me get the confidence in the first place. My chosen family of queer and trans people then gave me the life I have now. They helped me with emotional, physical and financial support, they gave me advice and courage, they gave me love and understanding.

Recently, it was my chosen family who saved my life by putting me in a hospital when I needed to go and making sure that I followed that up by working on my issues and being in a better place. It’s exhausting and stressful and terrifying and sad being a trans woman of color in public, and it’s my chosen family, especially my queer friends, my qtpoc friends and my trans friends who help me make it through. And they have and are continuing to make sure that I’m making it through every day.

Family is one of the most important things in the world to me. Without my mother and the rest of my immediate family, without my friends and coworkers, without all the people who I chose to call family, I wouldn’t be anywhere near where I am. When I think about Trans Day of Remembrance and how I’ve survived to see another one, I know that it’s because of my family.