Whenever I’m sitting on a bus or eating at a restaurant or grocery shopping or any number of activities that put me in the vicinity of youngins, I’m consistently flummoxed by the amount of shiny screened objects they have. I feel like a geezer to say this, but back in my day, I had toys with more than two dimensions.

My most memorable plaything was easily my Easy Bake Oven. I received it in the early 90s and it was a favourite well into grade school. Mine was a technological marvel, echoing the harsh lines and off-white shades of yesteryear’s microwave, complete with un-clickable buttons and a sticker light display. I made all of the brownies and cakes within weeks of it’s arrival, but that didn’t stop me from playing with the tins and the 100W bulb. I would reward anyone that listened to my rambling stories for more than ten minutes with tiny empty cake pans decorated with imaginary sprinkles. (Note: I will owe you an invisible brownie) 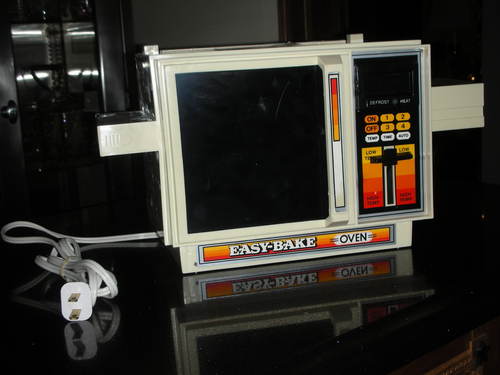 All kids like sweets, toys and burned fingers right?

Of course, the Plastic Box of Joy I toted around is quite different than what’s on the shelf today. Whereas I had a mini-microwave, any kid that wants to play-cook will only find this: 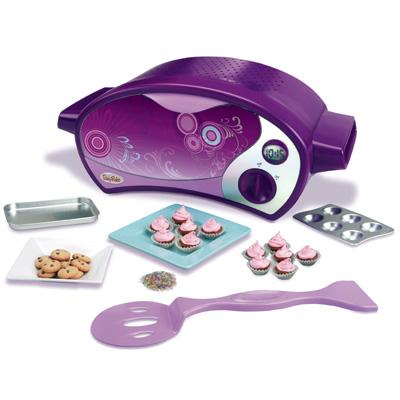 This hurts my brain more than a burn from a 100W bulb.

As it turns out, I’m not the only one to think there’s too much “girliness” going on here. Thirteen year old McKenna Pope saw a problem when she went shopping for her six-year old brother. She hoped to find something to help him embrace his love of food, but like I said, there’s pretty much only one option for kids that cook. So she created a petition to tell Hasbro to hold back on the estrogen.

[W]e soon found it quite appalling that boys are not featured in  packaging or promotional materials for Easy Bake Ovens — this toy my brother’s always dreamed about. And the oven comes in gender-specific hues: purple and pink.

I feel that this sends a clear message: women cook, men work.

I have always been adamantly against anything that promotes specific roles in society for men and women, and having grown up with toys produced by the Hasbro corporation, it truly saddens me that such a successful business would resort to conforming to society’s views on what boys do and what girls do.

I want my brother to know that it’s not ‘wrong’ for him to want to be a chef, that it’s okay to go against what society believes to be appropriate.

Baking and eating sweets seems like it’s a common activity among all children, so why has Hasbro pinkified the shit out of my beloved Easy-Bake Oven?  Their EASY-BAKE Ultimate Oven FAQ, says it’s for children over the age of eight with adult supervision. In the past the toys had been modeled after the kitchens of the time, moving through a palette of turquoise, yellow, avocado green and my aforementioned beige. In 2003 they released the Real Meal Oven which showed girls and boys making pizzas and snacks with a white and blue box. They even made a throwback to the 100W original with a teal version of the Easy Bake Oven and Snack Center. So really any child should be able to use it. 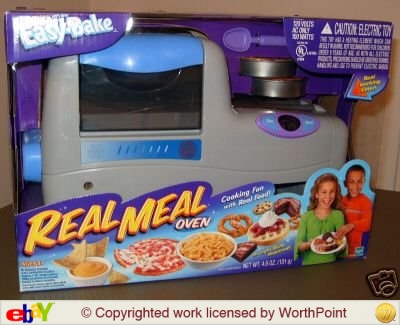 Girls and boys cooking! And no one exploded!

Not so fast according to Hasbro. That new teal version still only shows girls cooking. As for the rest of the line? “The EASY-BAKE brand is a fashionable fun food brand that inspires tween girls to bake, share and show their creativity and expertise through an immersive brand experience.” While the gendering of different colors is an issue in and of itself, in this case, the bubble gum pink and lavender incarnation only reinforce its stance as a Girl Toy (unless I’m really behind on kitchen design trends).

Kids like Pope aren’t asking for manufacturers to move mountains, simply to recognize that really awesome toys should be shared by all. They don’t need to go through their catalogue of toys to create girl versions that are “pink enough”  and boy versions that are “gross enough.” They just need to acknowledge that kids’ creativity will cause them to have interests that lie on both sides of the invented gender line at the toy store. What’s the point in ignoring half the population by only showing the other gender on the box? It kills me to think that little girls are missing out on opportunities to learn about science or construction and little boys aren’t getting a chance to express their creativity because they can’t imagine themselves as the actors on the packaging. 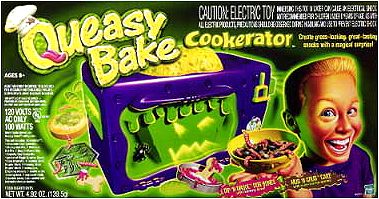 If you’re going to bestow gifts upon some children this holiday season, there are a few ways you can avoid reinforcing these stereotypes without making it a huge deal. You don’t need to make a giant political statement by vetoing all of the dolls on your niece’s wishlist or only giving toys in shades of yellow or unbleached cotton. Holidays are supposed to be fun for children, not a foray into the overly-complicated brains of grownups. The last thing you need is a crying five-year-old and bigoted family member chastising you for attempting to convert their daughter with a Tonka truck. But hey, you can still put something fun under the tree without compromising your beliefs.

Choose the ungendered option. It seems like most manufacturers will create a “boy” or “girl” version of their toys to force their parents to spend more. If you can, say “fuck you” to marketing by looking for the pronoun-free set. Does anyone really think boys learn chemistry differently than girls?

Take the adults’ preconceptions out of the picture. Chances are Hasbro won’t be changing their packaging between now and Christmas, but that doesn’t mean you can’t change it for them. Let your kids play with their present the way they want to, not the way the marketing geniuses at Giant Toys Conglomerated imagined your kids should be playing. If the packaging is covered with stock photos of little blonde girls covered in pink and bows as they create tiny bedazzled confections, simply remove the box. It might take a bit more work to repackage their presents, but maybe your little boy can focus on making his brownies instead of wondering where all of the other little boy chefs are.

Force siblings to learn from one another. If you’re giving to a household with multiple children, let the kids know that there aren’t any set rules when it comes to toys. Instead of giving the girls and boys different but equal gifts, just give them one. They’ll have to learn to cooperate and will  realize that model trains or beadwork can appeal to all genders. If if turns out that both Tommy and his sister love pink and firetrucks, more power to them.

Or better yet, give your kid a blank box. I’m pretty sure all kids love playing in cardboard boxes, regardless of which gender box they fall into.