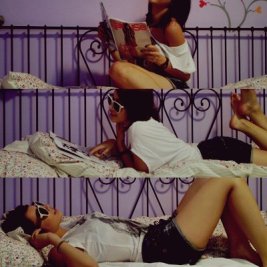 Way back in the early aughts, when I was still an eager undergraduate student matriculating at the University of Michigan, I found myself sitting in Barnes & Noble “reading The Canterbury Tales” with a companion I’ll call ‘Kris’. Kris was studying for Organic Chemistry because Kris wanted to be a Veterinarian. We’d been there for ~4 hours when I finally noted that I’d only read about two pages of The Canterbury Tales yet I’d managed to consume about 150 pages total of Paper, Poets & Writers, Adbusters, Shape, Wallpaper and THE FACE and, let’s be honest, probably also Entertainment Weekly. And maybe Glamour. (Yes, I felt sad about my abs afterward, had a skim latte.)

“Is it bad that I keep getting up and reading magazines instead of like, actually studying?” I ask. “I can SEE THEM FROM MY CHAIR. I CAN SEE THE MAGAZINES AND THEY HAVE POWER OVER ME.”

Kris generally enjoyed judging me whenever possible, but today Kris-the-future-Veterinarian was generous: “Nah it’d just be like if you dropped me off at a dog kennel and were like, STUDY! Hell nah, I’d just play with the fucking dogs!”

Now every time I see a magazine rack, I think of cute puppies licking my face, and I don’t feel so bad about being compelled by a force larger than myself to buy & read them all. IT’S JUST WHO I AM.

However, my favorite magazines continue to fall like toy soldiers. Today, another one bit the dust: PASTE, an independent music, art & culture magazine. It will remain online but cease sending copies to its 200,000 subscribers. This is a big deal because one time they published a cover that looked like this: 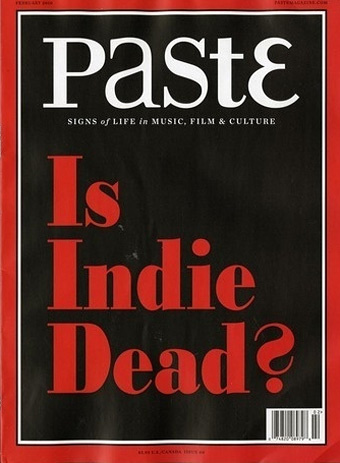 This is the latest downfall in a long virtual slaughterhouse of magazine deaths spanning 2008-2009.

TEN DEAD MAGAZINES THAT WILL
LIVE FOREVER IN OUR HEARTS 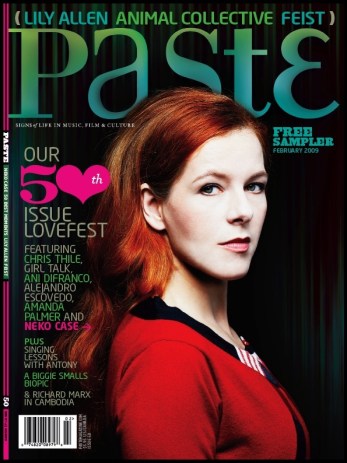 Today, Paste Magazine died. They caught up with Tegan & Sara, and then they died. This is depressing, because the death of independent print media makes room for only one thing: Big Brother Mind Control, or BBMC for short. BBMC transforms humans into cogs in the machine, like in The Handmaid’s Tale. 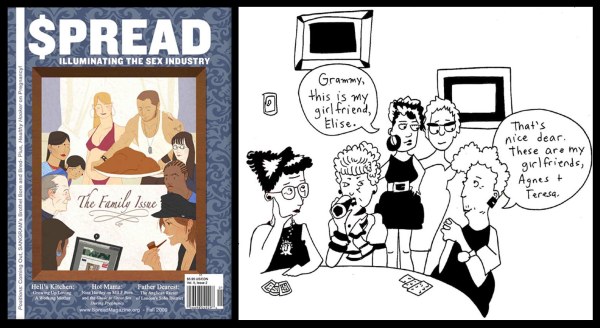 $pread magazine was “an independent magazine by and for sex workers and those who support their rights.” The cyber-savvy la-la-la-loved themselves some feminist sex worker blogs in the mid-aughts, but $pread insisted on reaching everyone through the democratic medium of good old-fashioned print paper. It was queer/trans inclusive, progressively pro-sex feminist and volunteer-driven — clearly too good for this world. 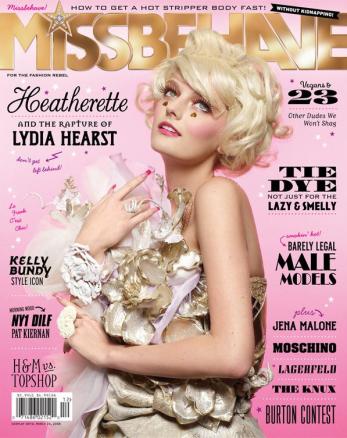 I loved Missbehave so hard I knew it would fold, as it did in May 2009. Moe at Jezebel wrote a love letter to Missbehave once, here’s what she said:
I love that you somehow seem to be having fun! I love that you review Tiger Eyes and the CIA World Factbook on the same page. I love that you updated me on the whereabouts of YouTube star Kelly. (Of “Shoes” fame!) I love your hot toddy recipe and your review of the “best slutty hotel,” the Caesar’s Poconos, even though I know you went there on a junket and I don’t, on principle, approve of junkets. But I’m willing to forget my “principles” because I love your crazyass layout and design and I don’t even usually give a shit about design. And this is kind of typical of me but: I love how your masthead this month lists your editors’ fave prescription drugs. I love that I actually enjoy reading something targeted at girls. Maybe it’s because you guys don’t seem to be taking yourselves seriously? I dunno, whatever, I don’t want to think about it. 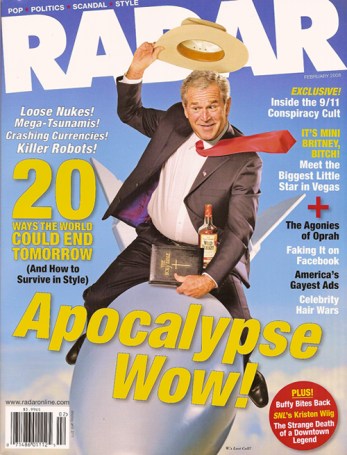 Media people loved RADAR ’cause it was snarky and found smart ways to talk about dumb things and did a big expose on Scientology when everyone else was afraid to. The SPY-inspired culture mag died and came back to life three times before September 2008, when AMI bought the website and turned it into “Zombie Radar” which is basically another TMZ. I still can’t figure out how new Radar is even slightly related to old Radar. Really, it keeps me up at night. 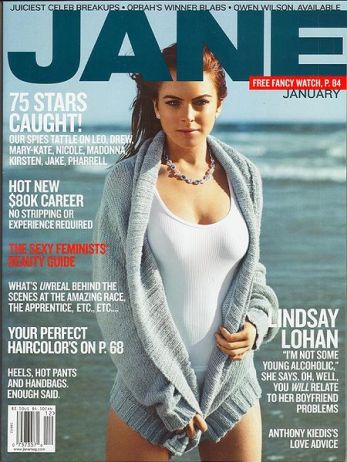 Sassy editor Jane Pratt’s new venture tried to do for Generation X’ what Sassy had done for teenage girls and it mostly succeeded. When it failed, Bitch magazine told us about it in its monthly “Jane Magazine Petty Criticism Corner.” Two years after Jane turned the editorial reins over to Brandon Holley, the mag folded, I was depressed. 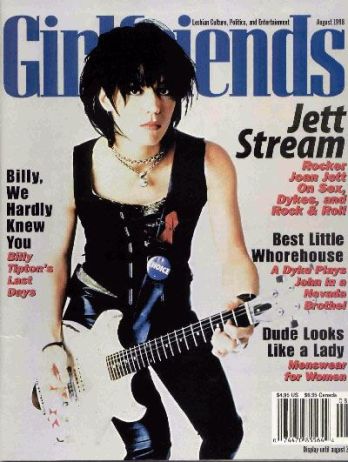 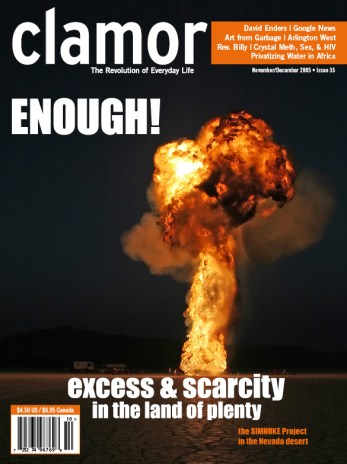 Two smart people used their 2o years of experience working in zines and independent media to “create a media outlet with the vibrance and diversity… of underground zine culture, but with the accessibility and inclusiveness of a nationally distributed magazine.” Yes, yes clearly this “DIY guide to everyday revolution” was too revolutionary to succeed in overthrowing the forces that revolutions attempt to overthrow. Luckily it’s all online now. 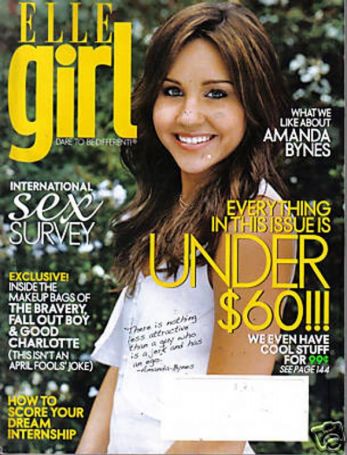 ElleGirl went online-only/lame June 2006, taking its affordable fashion advice for “ballsy chick rockers,” and those interested in going “tough and androgynous” with it. 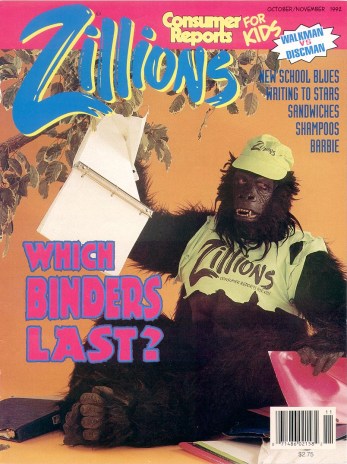 Zillions Consumer Reports wanted to “empower kids to become financially literate, see through media hype, and make informed marketplace decisions.” If that sounds boring to you, then I guess you’re too cool to hang out with that Gorilla LIKE I DID. 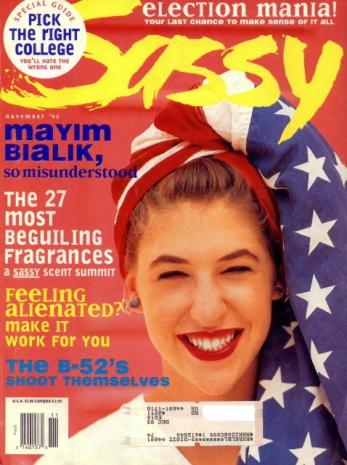 Both of your dear editors read Sassy, Seventeen, YM and Mademoiselle like it was our job. Maybe in a lot of ways it was? We soaked up, deciphered, picked apart, threw away and saved forever this teen mag culture with the kind of smug precision afforded only to someone under the age of 17.  Now Seventeen is like a mini-US Weekly and we read books about magazines we used to read, like Kara Jesella and Maria Meltzer‘s love letter to the magazine, How Sassy Changed my Life.

In Exploring Sassy Magazine’s Role as a Pioneer of Social Media, a 72-page thesis I read for funsies, its author says Sassy “differed from its competitors in its journalistic style, most notably in the way the writers interjected their thoughts into articles and spoke directly to the audience.” We liked that about it. We liked that about it a lot.

What are your favorite dead (or living?) magazines? Do you think Indie is dead? Did you read Paste? Are you sad? Heaps of lesbian magazines have birthed & folded over the years (Anything That Moves! Vice/Versa! Rubyfruit Reader!) as have tons of eager indie/lit magazines  — it’s almost par for the course, these days. As an indie pub in a Viacom/Regent world, we can attest that it’s hard out here for a mag (even online!) without the amneties & budget afforded by a large company. WHAT’S NEXT, HUH? If Bitch or Bust fold, I’m gonna cut somebody.