Janelle Monae’s The Electric Lady came out on Tuesday and I have spun it approximately 7384957345 times since then. I’ve listened to it at home, at work, while biking between home and work, while grocery shopping, and while asleep. It has turned my life into a nonstop jamfest. I’m very busy.

Monae is also very busy dancing on David Letterman’s desk, receiving singing telegrams from Prince, and making watercolor eyes at every single YouTube viewer via the only banner ads I have ever loved. She’s been so busy, in fact, that I don’t think she’s going to find time to come out during this tour and press junket.* But that doesn’t mean she doesn’t have a lot to say to us. With that in mind, I cranked up my gaydar for a couple of those aforementinoed runthroughs and picked up as many queer vibes as I could (if we can do it with movies, we can do it with albums, right?). Enjoy, fandroids. 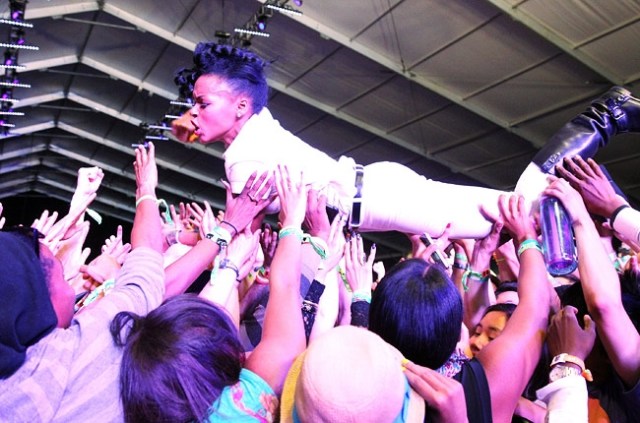 (*I’m being kind of facetious here and I applaud the trend, most recently espoused in this Flavorwire piece, of letting Monae be Monae without straightjacketing her with labels. Monae doesn’t seem to care and recently told Pride Source she’s not worried about being pinned down by “my own interpretation of myself nor the interpretations that people may have of me.” I still want to pin mad interpretations on her work, though.)

The Electric Lady serves as a sort of prequel to earlier albums Metropolis: The Chase Suite and The Archandroid: further tracing — through songs, videos, and amazingly involved liner notes — the journey of Cindi Mayweather, a fugitive android (an Alpha Platinum 9000!) who may or may not be The Archandroid (which I think is some sort of Jesus of androids) but who is definitely grooving around a futuristic metropolis fighting for android equality, pursuing a doomed love affair with a human, and being a pop star. Monae has spoken often about her use of androids to represent “the form of the new other… you can parallel the android to someone who has been ostracized or discriminated against or marginalized… a gay man or woman, African-Americans, immigrants, the excommunicated, the untouchables.” 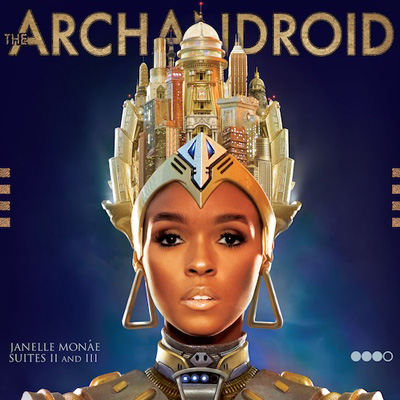 “ALSO THOSE WHO WEAR ENORMOUS HATS”

While most of her songs are uplifting calls to arms, exploring the power of individual expression (“Q.U.E.E.N.”), love (“We Were Rock And Roll”), family (“Ghetto Woman”) and community (“Victory”), she also clearly understands the tensions and challenges that face burgeoning equality movements. Some of the most fun parts of The Electric Lady are skits starring “your favorite robotic, hypnotic, psychotic” radio host, DJ Crash Crash. Crash Crash finds himself in a familiar position — while he personally supports a peace-and-love, integrative ‘droid-rights philosophy and strategy (“Don’t throw no rock, don’t break no glass, just shake your ass”), he fields calls from conservatives (like Peggy Lakeshore of Neon Valley, who is “disgusted” with the ‘droid rights movement) and radicals (like wannabe riot-starter Ninja Bat Leroy who Crash Crash dismisses as “ignorant, rusty-dusty, nano-thinking nonsense”). And then there’s the one guy who just wants to say “ROBOT LOVE IS QUEER,” a phrase I never thought I’d hear on the 5th best-selling album on iTunes. 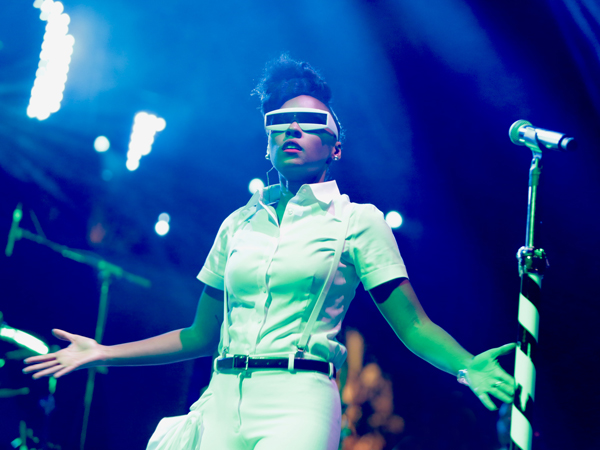 This album is full of killer guest stars doing killer things. Prince commands you to dance (standard). Miguel and Janelle ask each other for consent before slow-jamming (“I wanna scream and dream and throw a love parade/Is that ok?”). Erykah Badu breaks out drag lingo. Esperenza Spalding helps out on a song about Dorothy Dandridge, the first African-American to be nominated for Best Actress. And before you’re like “ok all of these people are awesome but none of them are queer though,” THERE IS A WHOLE SONG ABOUT SALLY RIDE. 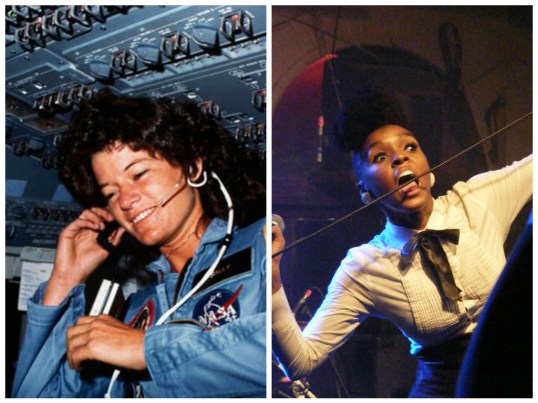 A song that includes the line “I’m taking my shit and moving to the moon / Where there are no rules.” We’ve all been there.

This album has lipstick all over its face. Seriously, on like every song. Highlights: 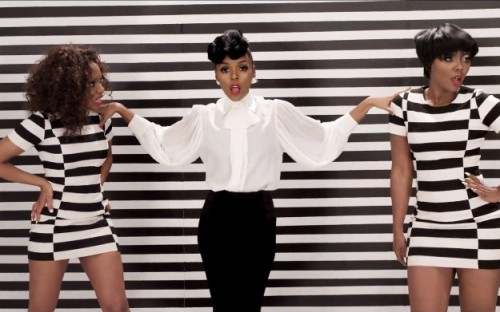 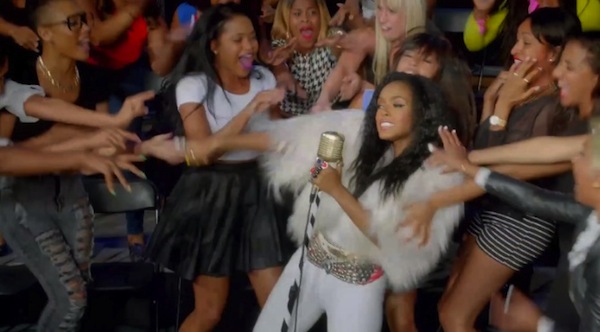 “Two dimes walked up in the building / Tall and concealing, wearing fancy things / Chopped up with a knife, hammered like a screw / When they walked in to the room, we didn’t know what to do / One looked at me and I looked back / She said “Can you tell me where the party’s at?” / She followed me back to the lobby / Yeah she was looking at me for some undercover love” – ‘Givin Em What They Love‘

“Just wake up Mary, there’s some amazing news / Wake up Mary, you got the right to choose / Real love” – ‘Sally Ride‘

Lizz style-thieved Janelle Monae way back, but this album has come with a new crop of well-pressed press photos. As this Pitchfork cover story shows, her black and white uniform looks really snappy in a garden setting. We also got probably my favorite verbal distillation of her style from album cover artist Sam Spratt, who described it as “Afrofuturism, androids, uniformity, Mod sorority, a little Prince, a little Donna Summer, a little MJ, a bit of Egypt, a hint of punk, and some cheesy 80s sci-fi.” Lately she has also been rocking suspenders, gold detail work, and a few new hairdos (though she likes blaming those on her clones). 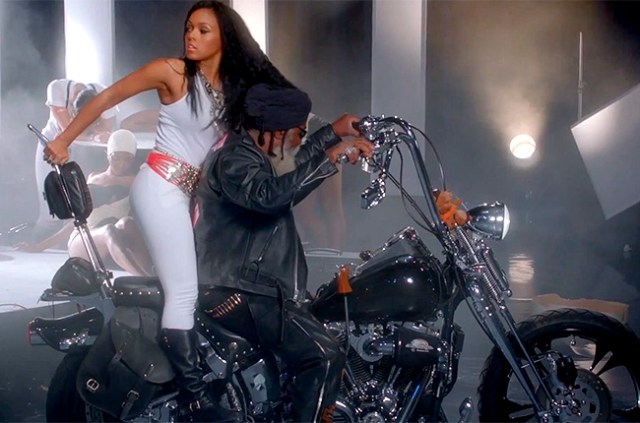 Monae has many great reasons for wearing some incarnation of a two-tone tuxedo every single day of her life, including: a. as an homage to her working-class family, b. to show the world that “it’s OK to like a dress if you’re a boy and to like a pantsuit if you’re a girl” and that other opinions “are just fears that previous generations have placed upon us,” and c. because her brain is so colorful and needs to be calmed down. But my new favorite reason is so that she can sing, on “It’s Code”:

“Love is gnawing on my mind / Feeling real down / All dressed up in my new suit.” 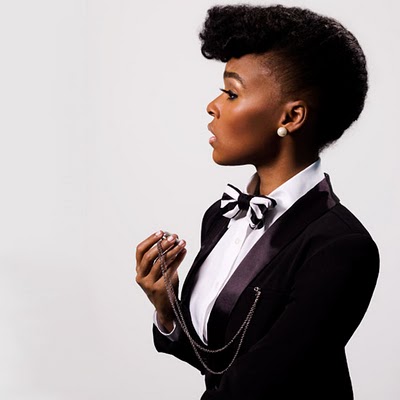 WE’VE ALL BEEN THERE, TOO

Monae likes to tell interviewers about how this album’s concept came about:

“It didn’t come to me until I went on tour and I started to paint, and I would sing and paint at the same time. I would paint the silhouette of this female body … and I didn’t quite understand why I was painting this woman. I actually was a little freaked out by it. So I went back to Atlanta and I talked to my therapist, and she encouraged me, she said, ‘You should name her. Name her.’ And I did.”

The Electric Lady, when she shows up in songs, seems to be one possible epitome of that classic queer “be or be with” conundrum. ” “She’ll walk in any room have you raising up your antennas / She can fly you straight to the moon or to the ghettos / Wearing tennis shoes or in flats or in stilettos / Illuminating all that she touches, eye on the sparrow / A modern day Joan of Arc or Mia Farrow.”

Judging by that silhouette, which shows up as the background of the album’s liner notes, Joan of Arc had a really nice butt. 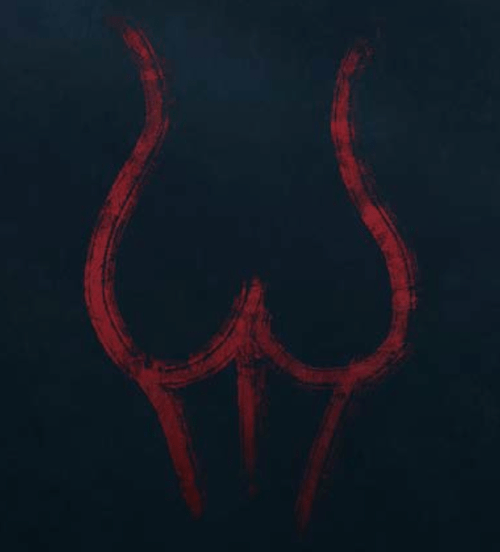 Did I miss anything? Let me know in the comments!