Stephanie Theobald opens her “article” (headlined “Guess who’s coming to dinner? Now lesbians are the must-have accessory for middle-class society”) as many lackluster trend piece writers do, by quoting a single person: a woman named “Claire Balding.” Claire Balding, who presents horse racing for the BBC, testifies that everyone LOVES lesbians ’cause you can talk to them about horse racing without worrying that they’ll try to steal your boyfriend/husband/mainstream heterosexual utopia away! And! They have marriage and adoption and families now and there are no lingering equality issues about this anywhere, at all (she says).

In the intro, she writes, “And anyway, who cares about sexuality anymore?” Either she’s arguing that sexuality is a non-issue, because the world is open-minded and accepting and full of happy dancing butterflies (to which I can only say, I’ll have what she’s on, and also: this is not true), or she’s arguing that sexuality has been discussed to the point of being too dull to think about, in which case, I’m not sure why she’s discussing it.

In either case, apparently no one cares enough about sexuality to be bothered by the following:

“The majority of my friends are straight,” says Emma Reynolds, 32, who set up Tsuru organic sushi restaurants, in London, “and my sexuality is rarely mentioned. Although sometimes, when I’m going to a dinner, friends will say, ‘Sarah’s coming, Scott’s coming… and the two lesbos are coming.’ ” The other “lesbo” is Clare Eastburn, 34, a banker, Reynolds’s partner of two years. “I think it’s because they don’t know many lesbians,” Reynolds says. “It’s their way of normalising the situation for everybody.”

This is, apparently, an example of straight people being comfortable with gay ladies. And being uncomfortable? Haley Magee, who owns a nightclub, says:

‘”It’s as if I’m a modern-day curio. If there’s a lull in conversation around the table, they think it’s okay to ask really intimate questions about my sex life.”

One of the types of lesbians to be friends with

Other lesbians in the article discuss their kids’ friends’ mothers escorting them to play dates constantly; feeling like the other parents are uncomfortable around them and are relieved if they find out the biological father is involved with their family; being spontaneously offered sperm “all the time” by random men; and feeling like people around them are only “being polite on the surface.” Meanwhile, the straight dudes interviewed talk about “the classic reaction of curiosity, then a twinge of disappointment at their unavailability”; people who come out at work as being a subject of embarrassment; finding all lesbians “very self-centered” and “unbelievably selfish” because the interviewee’s wife’s sister doesn’t have kids and gets to go to pubs; and how lesbians always want to talk about sexuality and their relationships.

Theobald then goes on to offer a sort of field guide to the wild species that is the modern lesbian, in a reductive and essentializing way that also gets some things wrong. Because if you’re going to perpetuate stereotypes, at least do it correctly, right? 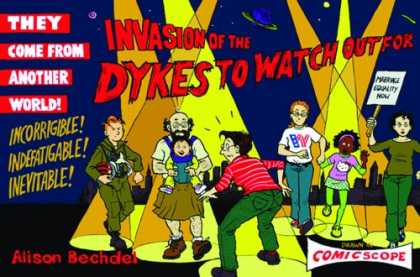 it's funnier when actual lesbians do it

The guide breaks down gender presentation and interest in buttoned shirts into: the literati, DJs, alphas (translation: Bette Porter), fashionistas (translation: femmes with short hair, because obviously anyone with short hair is a lesbian), head girls (wistful translation: Emma Watson), eco-activists, and latecomers (translation: anyone in a blazer with children). And while it’s refreshing to see a lack of references to, say, lack of fashion sense or cats, there’s something more than a little off-putting about it. Sample:

The DJs
Find them: On the decks at a fashion party, or falling out of the Box after pulling an A-lister.
Signature look: Justin Bieber fringe, American Apparel T-shirt, low-slung Carhartt jeans, wallet chain and Louis Vuitton high-tops by Kanye West.
Make friends with them: With some straight-up tonsil tennis.

The Alphas
Find them: On the board of a City law firm, or running the trading floor at an international bank.
Signature look: Paul Smith suit (complete with jazzy lining), TM Lewin shirt, Mulberry Bayswater, Tom Ford specs and Condoleezza Rice screensaver.
Make friends with them: At Islington dinner parties and contemporary art openings.

Clearly, this intensively researched and carefully compiled guide was in no way influenced by anyone watching three episodes of The L Word and drawing conclusions. Which is probably why she omitted several key categories: the adorable butch comic (translation: Julie Goldman times 100), the malnourished blogger trying to remember what the sun looks like, and vegans. Following her good example, I can only assume that legions of random British people will now be going out, armed with organic hummus, and trying to befriend lesbians so they can ask them inappropriate questions. Like Skynet and velociraptors, the threat is real. So:

How to Spot a Straight Person

Find them: In any lesbian bar, alone, sitting furtively in the corner. Or, at Dinah Shore.
Signature move: Telling you and any girl in proximity to you that you two make a beautiful couple and smiling creepily when you don’t respond because you’re both in line for the washroom, offering to donate sperm just in case, being asked to leave by security (if you’re lucky).
Avoid them: By breaking gender conventions.

Find them: Being over protective at daycare, in light coloured cardigans in straight bars, at PTA meetings, at Republican conventions.
Signature move: Pulling their children closer, going to the washroom to avoid eye contact, or supporting Prop 8.
Avoid them: By making out with your girlfriend/partner/lover.

Watched a Showtime L Word Marathon Recently, Recommends it to Friends as “Sex and the City But Gay”

Find them: In the Sunday Times (this isn’t the first time).
Signature move: Writing trend pieces about befriending lesbians that are completely off-putting.
Avoid them: By closing the tab.

Are we feeling essentialized yet?