When you woke up this morning, you didn’t know what treasures or tragedies this day would bring. You didn’t know if you’d get a hangnail or a free burrito, or whether or not the elastic in your underpants would suddenly give out while you walked down the street. And you certainly weren’t planning to have your heart stolen from your ribcage by a tiny, tiny pineapple named Tiny Pineapple, were you?

Well reader, I’m sorry I couldn’t have prepared you for this sooner, and I’m especially sorry if you’re allergic to pineapples, but I’m NOT sorry for what’s about to happen to your life, your love and your soul.

The Adventures of Tiny Pineapple is a shiny brand new webseries / lifestyle, conceived inside the brilliant brains of comedian and nerdy heartbreaker DeAnne Smith, DJ and visionary Carly Usdin, and photographer to the stars Robin Roemer. Read more below on the genesis and genius of Tiny Pineapple after you watch episode one, “Halloween.”

Autostraddle was given exclusive behind-the-scenes access to the making of The Adventures of Tiny Pineapple, which will air every Tuesday until the end of 2013. We wanted to know about the inspiration for Tiny Pineapple. Carly Usdin told Autostraddle:

“The series was inspired by an Instagram photo I took of a tiny pineapple at a grocery store.” 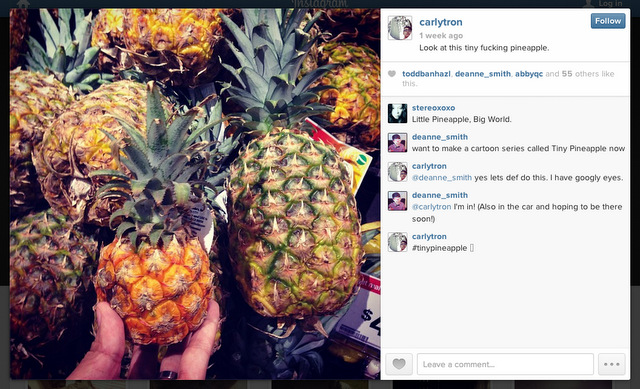 “So Carly was at Ralph’s last week and posted a picture of this tiny pineapple, just saying like ‘look at this tiny pineapple.’ And DeAnne thought that ‘tiny pineapple’ was fun to say. And Carly bought the pineapple and several normal-sized pineapples and they started filming the soon-to-be smash-hit webseries ‘The Adventures of Tiny Pineapple.'”

“We set out to make a show wherein the show opening and the credits were much longer than the show itself, and I think we succeeded here.”

Because I know and appreciate this readership’s devotion to preferred pronoun usage, I asked Usdin about Tiny Pineapple’s gender and pronoun wishes:

“Tiny Pineapple transcends gender. But also his preferred pronoun is “he” because that’s what we’ve been calling him. But he TRANSCENDS GENDER still.” 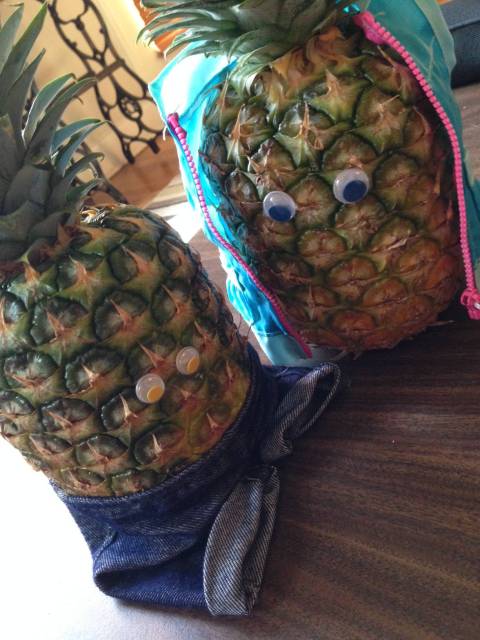 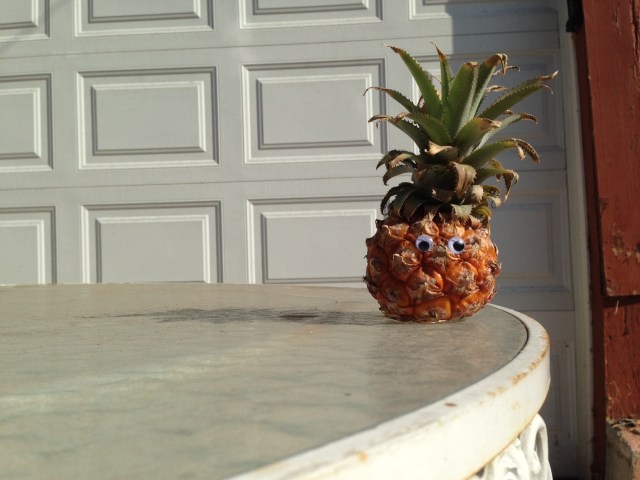 We’ve been told you can expect a special guest appearance by Arthur, Robin and Carly’s incredibly adorable and wise-looking dog, so be on the lookout for that! In the meantime, follow Tiny Pineapple on every relevant social media platform ever: YouTube | Twitter | Facebook | Tumblr | Instagram