Queermos, y’all, it has been a big week for privacy as it relates to our digital lives. Here’s just a few things that happened this week regarding privacy in the digital sphere, starting with the most high-profile:

This passed Thursday, a federal appeals court ruled  that the NSA data collection brought to light two years ago by Edward Snowden falls outside the scope of Section 215 of the Patriot Act—and considering how horrifying and seemingly-comprehensive The Patriot Act is, it’s kind of amazing that something could be more horrifying and comprehensive. The data collection won’t stop yet, though—the judges on the 2nd Circuit U.S. Court of Appeals panel are leaving it to Congress because they’re already debating legislation that will resolve the illegality in one way or another: renew this section, introduce something different it or let it die, basically, by June 1st. I do not have a lot of faith in the outcome of Congress dealing with the NSA, but perhaps I’m being pessimistic.

I also feel like every time I revisit thinking about the NSA phone surveillance, there’s some sort of facet or nuance that I’ve missed before. It makes me wonder what we’re all collectively missing when it comes to how we interact at the intersection of privacy and technology?

Speaking of our new dystopian world full of constant surveillance—

I first found this on Engadget, watched the Vimeo video and experienced both a high level of anxiety and a curious fascination—even as the digital noises made my breath catch in my chest a bit, I couldn’t close the window or pause the video. I looked up everything on it that I could find.

The installation, by British artist Stanza, is on display at the Arentshuis Bruges Museum until tomorrow. The miniature city reacts to data transmitted from London via a series of environmental and surveillance sensors and seven tiny cameras broadcast visitors’ images onto miniature billboard screens mounted on buildings in the piece. From Stanza’s website:

The data and their interactions – that is, the events occurring in the environment that surrounds and envelops the installation – are translated into the force that brings the electronic city to life by causing movement and change – that is, new events and actions – to occur. In this way the city performs itself in real time through its physical avatar or electronic double: The city performs itself through an-other city. Cause and effect become apparent in a discreet, intuitive manner, when certain events that occur in the real city cause certain other events to occur in its completely different, but seamlessly incorporated, double. The avatar city is not only controlled by the real city in terms of its function and operation, but also utterly dependent upon it for its existence.

This artist, whose paints are data, really gets the anxiety of living in a surveillance and data-collecting age right. I wish I were in Bruges to take a small Saturday sojourn to see the piece live. I’d probably short circuit, so perhaps it’s for the best.

What the Davis Ruling Means for Cell Records

Back to the topic of cell phone records, the Davis ruling in Florida states that smartphone users have no expectation of privacy when data is turned over to a third party. Since in the digital age one almost needs to have technology that transmits things about you to function in the modern business world, this is damn preposterous. It’s also a little unclear—the ruling was made in regards to cell tower records that pinpointed the location of Quartavious Davis over a period of 67 days and then used that location to associate him with a series of Miami robberies. They did this all without a warrant. Originally, the courts decided that there was an expectation of privacy and that a warrant needed to be obtained before seeking that information, but the en banc (more than the regular three-judge panel) hearing disagreed. But does this apply to other third party service providers outside the scope of cellphone records?

While this ruling applies only to Florida, it’s worth noting that courts all over the country are grappling with exactly how to deal with expectation of privacy in a digital age—some may look to this ruling for inspiration or justification (gosh I hope not). Personally, searches require warrants. End of discussion.

As Supreme Court Justice Sonia Sotomayor noted in her 2012 concurring opinion in United States v. Jones, an approach that excludes Fourth Amendment protection to digital data stored with others is “ill suited to the digital age, in which people reveal a great deal of information about themselves to third parties in the course of carrying out mundane tasks.” More fundamentally, she noted that it was time to stop treating “secrecy as a prerequisite for privacy.”

Redacted: A New App on the Scene 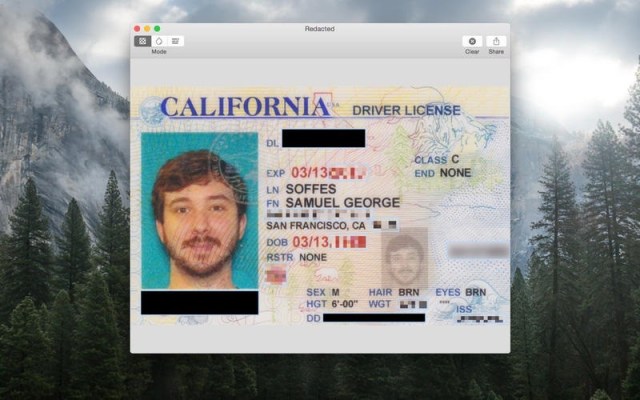 Launched on May 5th, this Mac app makes it easy to blur, black bar and pixelate sensitive information off of images. Sure, other photo editing software can do that, but this pared-down set of privacy-focused tools only costs $4.99—definitely less expensive than other, heavier  photo editing software and a lot more professional-looking than, say, me scribbling things out using Skitch. But the real story is how I stumbled upon this app—there’s a hilarious posting about how little it takes to break onto the top paid apps list in the Mac app store that’s worth a look. This app made it with only $302 in profit.