Like so many things, I was first introduced to the midheaven point through a meme. I follow my personal astrology fairly closely, so when I had no clue what my midheaven sign was and it supposedly represented “what I wanna be,” it sent me into a minor existential crisis. What insights have I been missing out on? What is life and have I been doing it all wrong? 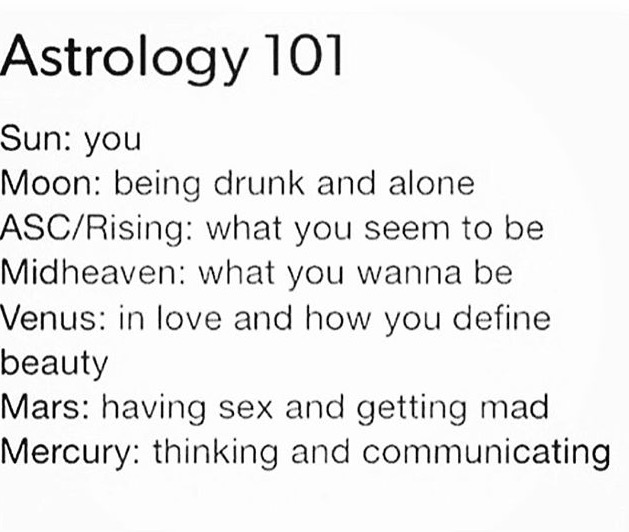 To begin, the midheaven, or Medium Coeli (MC), is one of the four major angles in your birth chart and like your rising or ascendant (AC) sign, it’s determined by the time and location of your birth. Your midheaven is the highest point in the sky from the earth between the horizon line at the moment of your birth and to some it represents the North Star that helps guide our efforts.

As I did more research on what the midheaven means, I saw that some astrologers think that it can also provide insight into our relationships with our parents. My MC happens to be the same sign as my mother’s sun sign — Virgo — so I was especially intrigued.

Aside from the asteroid Ceres, my MC is the only place where Virgo appears in my chart. This is especially interesting as the placement of Ceres is also thought to reflect on the mother-child relationship, as well as our nurturing tendencies and how we grieve. Pretty eerie that the two places in my chart where my mother’s sun sign appears also happen to correspond to maternal relationships, right?

I was beginning to wade into uncharted astrological waters, so I reached out to professional astrologer Evelyn von Zuel of Astrom Council to figure out what the MC reveals about my potential mommy issues.

Evelyn explained that many of our current astrological interpretations have been passed down through patriarchal systems over the past 3,000 to 5,000 years and before people had the freedom to move between careers, family lineage represented an individual’s highest potential. Over time, as our families became less intertwined with our social reputation, the meaning of the midheaven shifted to reflect more on our career paths.

Present-day astrologers are split on how the MC relates back to our parents. According to Evelyn, “Some people say that it [represents] the mom and some people say that it’s the dad and others say that it depends on who the dominant parental figure in the household was and who molded you to be a certain person in the public eye.”

Evelyn has even had difficulty nailing it down in her personal business and admitted that she often gets it wrong. “I’ve tried sticking with a system when I read people’s charts and then I’ll be wrong. It’s really dependent on the person.”

I wondered, if the midheaven point is a reflection of our “highest potential,” could it help guide those of us who feel unfulfilled in our careers and are seeking new direction?

“The MC line sits at the entrance to the 10th house, and is associated with the planet Saturn and the house of Capricorn. It reflects career, aspirations, public reputation, and life goals. So you could say okay, this person has Virgo on their MC, they’re going to be very detail-oriented, they’re going to be focused in a field that has to do with servitude for others and wanting to help and take care of people. They’re going to be skilled at finishing up things rather than starting things. So they could start from there to figure out what they should be doing.”

Having Virgo on my MC, I felt like Evelyn was talking about me. My eye for detail was what drew me to copy editing and although I’m full of ideas, I often have trouble executing them. I also moonlight as a tarot reader, so perhaps that’s where servitude factors in. The more I considered it, the more I became convinced that my MC was not necessarily a reflection of my relationship with my mother, but of what she had modeled to me in her career.

My mother accepted her first elementary school teaching job when I was eight. She was also a single mother, so my late afternoons and sick days were often spent in her classroom observing. I learned firsthand how hard teachers work, and knew that even when she arrived home around dinner time, lesson plans would still need to be constructed, quizzes graded. Outside of her diligence, I think what stood out to me the most was how much she loved her job. She truly believed that every child had potential and more than 20 years later, I’m still stopped by former students who never hesitate to tell me that “Mrs. Dorsey was my favorite teacher!”

I wasn’t completely naive. I knew that a lot of people weren’t privileged to have a career they truly enjoyed, but seeing my mother find fulfillment in that way convinced me that I could make it happen for myself. As she moved up the ladder to eventually become principal, she showed me how we are rewarded when we follow our destined path. It’s that perseverance that motivates me as a struggling writer and pushes me to continue pursuing my dreams.

Now that I had dissected my own relationship to the MC, I asked Evelyn how it might manifest in the rest of signs. Rather than go through them one by one, it was easiest for her to break it down based on the sign’s modality — that is, whether they’re cardinal, fixed, or mutable. Cardinal signs, which include Aries, Cancer, Libra, and Capricorn, are the initiators of the zodiac. Taurus, Leo, Scorpio, Aquarius are fixed signs and have a stabilizing quality. Mutable signs are the most flexible, and include Gemini, Virgo, Sagittarius, and Pisces.

“Fixed signs are the ones who solidify and hunker down. They’re the ones that are going to be in it for the long haul — maybe not so much Aquarius because they change a lot — but they’re going to be more stubborn in their careers. They’ll have a goal in mind that they eventually get to, especially Taurus.”

So what about people like me, who were ignorant to the MC’s significance until five minutes ago? Is it too late to change course?

Evelyn reassured me, saying, “For a lot of people, the MC doesn’t really come into focus until later on in their life. So if you have a career goal that doesn’t feel very realistic or manageable or seems difficult to attain, don’t get discouraged. It’s going to take time to get to that place, especially depending on the sign and where your sun is, it’s going to take some time to get there.”

Don’t feel bad if you find this information overwhelming; so many of us are just beginning to dive into the depths of our ascendant and moon signs. You’ll have to look up your entire chart to find your MC, but once you get familiar with it, let that point be your guiding star.