Ed. note: This is a letter Crystal wrote to me telling the story of the time she met Tegan and Sara in Sydney. After reading it, I did what any sane editor would do and asked if we could publish it on the internet. Enjoy! Love, Laneia

“What would you say to Tegan and Sara?”

I used to get asked that same question at church, except it was about what I’d say to Jesus when I met him at the pearly gates, or wherever it is that you encounter Jesus in the afterlife. Back then, my answers were along the lines of, “I love you” and “please forgive me” and “thank you for dying”… all which earned me gold stars at Sunday School, but would surely get me ejected from the Tegan and Sara Meet & Greet at the Sydney Opera House.

Despite workshopping the answer with friends during the week, I felt terribly unprepared. My opening lines still needed a LOT of fine-tuning.

“… it’s my job to obsess over you”.
“… I’ve spent the past four years documenting your every move.”
“… I talked some smack about “Love They Say” in my Heartthrob album review and, while I still wouldn’t cite it as one of your strongest songs from a lyrical standpoint, I realize now that I had been projecting some of my own personal issues regarding love onto that track and it wasn’t fair, I’m sorry.”
“… want to see a photo of my cats?”

My VIP ticket entitled me to a few minutes of face-time with Tegan and Sara before one of their Sydney concerts. I was nervous. Not because I’m shit at small talk; I’d done enough phone interviews to know that Tegan and Sara are skilled conversationalists who can pick up my slack. 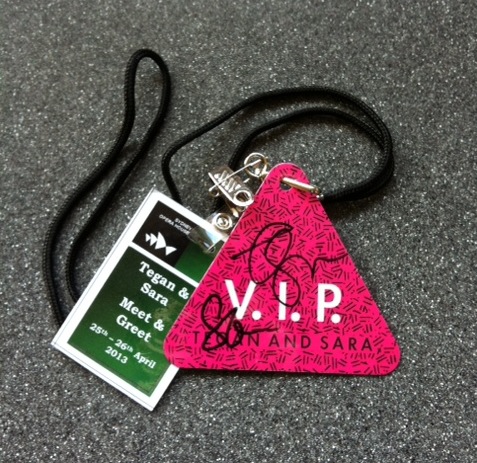 I was nervous because I’m shit at looking excited.

You’ve met me. I’m a soft talker and a silent laugher. I’m very aware that my “wow, I’m having a great time!” face looks very similar to my “oh my god kill me now” face. I didn’t want Tegan and Sara to mistake me for that guy — the one who’d show up to a fan event and act above it, a little Too Cool For School, if you will. No one likes that guy.

Thankfully curiosity beat out my weirdo insecurities, and I forged ahead to the pre-determined fan meeting spot, the Sydney Opera House Box Office.

The event wasn’t actually called that, to my knowledge, but I felt that the fancy venue choice gave me license to be a little melodramatic. The box office lady felt similarly. She triple-verified my identify and slid a nondescript envelope through a slot in the perspex window.

“Your instructions are in this packet,” she whispered.

Inside was a bright pink VIP lanyard with a tiny typed note, directing me to meet someone named Jeremy by the Stage Door. Or maybe his name was Jerome? The note self-destructed as soon as I read it.

I arrived at the fan meeting point the same time as a few small groups of lanyard-wearing asymmetrical-haired denim-clad ladies and a handful of dudes. One paced up and down the crowd, telling cool stories into his mobile about his close personal relationship with the band. I considered striking up conversation with the only other person standing alone but decided to remove and redon my jacket half a dozen times instead.

Elusive Jeremy/Jerome finally appeared. He’s a ridiculously handsome man who speaks with the confident tone of someone who has no time for stragglers. So, when he said “follow me!” and charged off through the loading dock, we all but ran. He led us into the belly of the Opera House, past a large staff cafeteria filled with crew, down a dark, dank corridor and then into the saddest conference room in Sydney. Everything was beige and circa 1973.

Jeremy asked us to form an orderly queue, execution-style against the boardroom wall. Up front was a tripod with a  small point-and-shoot camera. Jeremy explained that, one by one, we were to approach Tegan and Sara and, after a quick chat, our photo would be snapped and shared with the band’s 805,703 Facebook fans, sans any filter to lift my skin’s natural washed-out hue.

I liked Jeremy. He wasn’t like other artist reps I’ve encountered, the ones who treat fans like hysterical teens before they even have a chance to propose or pass out. He didn’t read any rules, or remind us to be chill. Maybe he knew that we were too anxious to do anything but hug our designated section of beige.

10 minutes later, Jeremy announced that Tegan and Sara were en route to the conference room. I had a silent panic. I still had no idea what to say. I wasn’t there to promote Autostraddle, or ask them to be my Twitter friend. I wasn’t there to talk about music, either. Talking to musicians about their music always feels awkward when I spend my life talking about it behind their backs, on this website.

When I think about Tegan and Sara, those thoughts aren’t often about the music. It’s not always my jam. But I do think about their impact on their fans, like how their music makes young queers feel better about the feelings they feel and about taking up space in the world. I don’t know if that was intentional but it’s indisputable, and so important, and if I had to communicate my respect for that in under 90 seconds, I guess maybe all I wanted to do was shake Tegan and Sara’s hands.

Unfortunately, that would still leave me with 85 seconds to kill.

My panic attack was interrupted the whirlwind arrival of Tegan and Sara, who simultaneously sucked the air from the room while charging it with a million volts of charisma. They seemed so genuinely thrilled to be there!

When the first fan approached Tegan and Sara, the room fell dead silent. Everyone was eavesdropping on a nervous attempt at conversation. It was awkward as hell. I tried to contribute some white noise.

“It’s a million degrees in here.”

The girl beside me smirked. She said, “I know what you mean, they’re gorgeous.”

Except she didn’t know what I meant, because I didn’t mean that. It was seriously warm inside. I removed my jacket for the seventh time that evening and my blood was still at a slow simmer.

People eventually started chatting again. A group of queer individuals started devising a game plan: who would walk up first, who would pose first, who would say what. They had their shit together. I was jealous. The one with the most alternative of hairstyles joked, “don’t hit on Sara in front of her girlfriend, you guys.” I had no idea which girl in the room was Sara’s girlfriend but good on her for not carrying a big stick.

Suddenly, it was my turn.

Sara and I shook hands. Firm grip. Friendly eyes. She said “Sara”. I said “Crystal.” She said “nice to meet you” and I repeated it back to her, maybe 2 or 3 times. She was wearing a leather jacket and olive green hi-tops with metal studs. She looked very cool.

I turned. “Tegan.” “Crystal.”  Firm grip. Friendly eyes. Mission to shake hands: complete. I said “nice to meet you” only once to Tegan, but that didn’t make it any less true. I can’t tell you what Tegan was wearing because I had been glamoured (Twilight reference) by the impressive waves in her side fringe.

Turns out, the fans before me had flew in from New Zealand. I walked to the Opera House after work.

Sara said other things as well, about shading and colors, but I was too distracted by some fairly serious eye contact to recall it verbatim. But I do recall my smooth reply.

“I am SO GLAD that you like it! THANK YOU for saying so!”

My out-of-character enthusiasm was, in retrospect, perhaps a subconscious attempt to compensate for my geographic privilege.

Tegan laughed at my intense gratitude for Sara’s tattoo compliment. I tried to reclaim my chill by panning, “I didn’t do it, though.”

The “duh” was delivered tonally.

The rest of her sentence was drowned out by the sound of my dumb comment crashing and burning. Tegan began miming someone trying to tattoo their own shoulder. We lol’d. I gave her silent thanks.

Sara, who was not at all ready to move on, observed that my tattoo created a nice contrast to my all-black outfit. She couldn’t have know that my predominately black wardrobe was, in fact, my primary motivation for choosing an insanely bright floral tattoo. In that moment I’d never felt so seen.

Tegan asked whether I’d seen them in concert before.

“I saw you perform last night.”

In retrospect, many true statements could have followed. Like “I had a nice time!” or “I Couldn’t Be Your Friend” is pretty great live!”. Literally anything would’ve been better than what happened, which was me leaving the confirmation of my attendance awkwardly hanging in the space between us.

Tegan, my social savior at this point, jumped in with an explanation of how this concert would be different to the previous night’s. I listened attentively. Sara countered that, actually, it won’t be different at all. I panned another joke, something about how no-one ever stands up at the Opera House. They laughed. Nailed it. 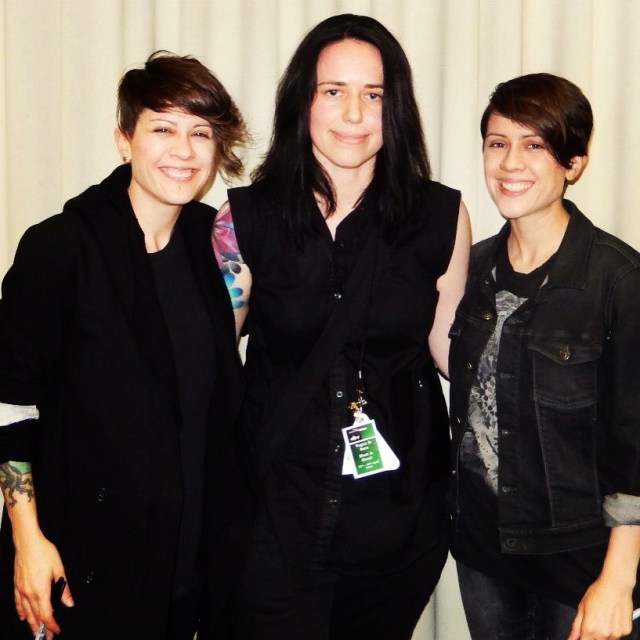 My farewell was neither proper nor dignified. As soon as I heard the camera shutter click and felt Tegan and Sara’s arms start to relax along my back, I threw a quick wave in their general direction and bolted for the door.

One of them called out after me. “Have fun!”

In the corridor outside, two long-haired lady ushers were hypothesizing about the maintenance requirements of Tegan and Sara’s haircuts. Soon enough, they escorted me back to the concert hall, to join the non-VIPs. As I took my seat, I noticed that the lanyard around my neck had two fresh autographs. I have no idea when that happened.

The concert started. I did have fun.