It starts at Thanksgiving. For the Pearsons, it almost always starts at Thanksgiving. The multi-generational, blended, mixed race, pro-adoption NBC blockbuster family is nothing without their traditions. I could try to explain it, but let’s just say that this particular tradition begins with a busted mini-van, a cabin with no heat, a few mini hot dogs and Police Academy on 1980s VHS. It continues through this year, when ten-year-old Tess Pearson wakes up with cramps.

If it feels like I’m rushing to the middle of the story, then please understand that in This Is Us, nothing is ever linear. NBC’s 2016 breakout weeper hit (which remains the most-watched drama in network television) loves to play with assumptions of time and place. There are three generations of the Pearson Family, and three separate timelines to keep track of. The first surrounds the family patriarch Jack Person (Milo Ventimiglia), his wife Rebecca, and their three children. One of those children, Randall Pearson (Sterling K. Brown), is a black adopted boy in an otherwise white family. Randall is the heartbeat of the next generation of Pearsons. He has three children of his own, and this brings us to young Tess. We know that Tess Pearson grows up to be a social worker and a key figure in keeping her future family together, but for right now she’s ten.

Tess has a younger biological sister, Annie, and older sister who’s adopted, Deja. She’s a Girl Scout who loves chess, the color purple, and laughing. On Thanksgiving she wakes up with what she thought was a stomach ache. In a way that many of us can relate to, Tess’ stomach ache turns out to be her first period, and the rest of her day from there turns into a complete comedy of errors — her uncle mistakenly walks in on her! She gets overwhelmed and locks herself into a bathroom! Her aunt comes and saves the day by sharing silly, embarrassing stories! 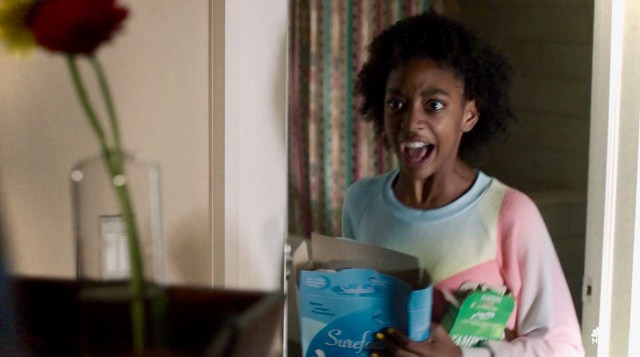 First periods are go-to coming-of-age fodder (though still not told enough on television if you ask me. Talking publicly about an everyday biological function can go a long way in normalizing the experience for millions of young people). Stories like this work because they’re relatable. If you’ve ever had a first period, then you’re likely to remember the confusion or embarrassment or whatever intense feeling that was uniquely yours. It makes it that much easier to just plug those feelings into the character you’re seeing on screen.

While Tess’ first period hits all the notes one might expect, two things set it apart. One, her coming of age moment dovetails into her first coming out. Tess quietly corrects her Aunt Kate on the assumption that one day she might have “a future boyfriend.” It’s a narrative twist that plays well by tying one emotionally intense experience to the other. Often we’re told that queerness is for adulthood, or at least can only be understood in adult terms. Tess isn’t made to be older than she is. She’s a fifth grader, in a rainbow sweatshirt, in her purple bedroom, talking to her aunt. She’s safe, loved, and cared for.

The second, of course, is that it happens on Thanksgiving. Since This Is Us can’t rely on the logic of linear storytelling, it finds value in common events: the Super Bowl, the season opener for the Pittsburg Steelers, birthdays, and most of all, Thanksgiving. These events trace the Pearsons across generations, building on their importance by layering them between decades. Tess’ grandfather saved his family from a disastrous Thanksgiving one year using mini-hot dogs and Police Academy; her other grandfather, who’s bisexual, first fell in love with his partner on Thanksgiving; her father discovered the truth about his adoption on Thanksgiving; and now she gets to join the long family tradition. Having Tess begin her journey of self-discovery on Thanksgiving cements her place in This Is Us’ narrative as central to the next generation of the Pearson clan. 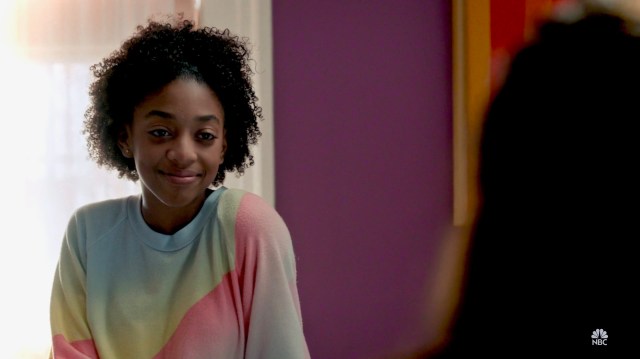 When This Is Us Executive Producers Issac Aptaker and Elizabeth Berger, who are also behind this year’s gay teen romantic comedy Love, Simon, decided to explore queer desire from the perspective of a tween, the first thing they did was reach out to the actress playing her. 13-year-old Eris Baker jumped at the opportunity. Aptaker told Entertainment Weekly: “Eris was really excited about getting to tell this story and really getting to push herself as a young performer… [she] kept a diary in character to help her really get inside of Tess’ head and bring as much depth to the performance as possible.” That behind-the-scenes character work led to one of the most sublimely sweet, infinitely relatable coming out arcs of 2018.

You see, Tess’ story doesn’t end on Thanksgiving. A bit overcome with these new emotions, she makes her Aunt Kate promise not to tell her parents. Kate keeps her word, but only on a technicality. She tells Tess’ grandmother (Rebecca, played by Mandy Moore) instead. Without going into too much detail, what comes next is as awkward as it is sweet. Rebecca works overtime to try and support her granddaughter. She doesn’t want her to feel pressure to come out before she’s ready, but she also doesn’t want her to feel alone in her closet. More than anything, she doesn’t want Tess’ life to be marked by fear or regret for even one single moment.

With her grandmother’s voice ringing in her ears, Tess decides to tell her parents. This Is Us is infamous for making its audience cry, and with Tess’ big coming out, they shot all the way to the stars. Her coming out is messy. She doesn’t know all the right words or how to explain her emotions eloquently. She comes downstairs in her bathrobe and blurts out all her worries at once, leaving them there like hot spilled soup on the tile floor. She doesn’t wait for the perfect moment or the perfect phrasing or for everything to be just right. There’s mucus obviously coating the back of her throat, snot’s running out of her nose, her eyes are shining red with tears, her young voice wavers and cracks. But that’s okay. It’s triumphant, because you know what? She doesn’t let the anxiety that had been eating her up for weeks win.

There are lots of layers to coming out. There’s that ice-cold, anxiety-laden grip of not wanting to be the center of attention, of being afraid to come out because coming out means shining a spotlight on everything that makes you feel different and alone. The way your skin feels transparent, as if your gooey insides and blood and guts are bare for the world to see. At the same time, staying quiet becomes its own kind of prison — clawing and piercing at you, choking you from the inside. There’s no path forward that isn’t mucked and tangled and smeared. And if you’re a Type-A overachiever, that’s the worst kind of feeling. It’s rough. I didn’t know how to handle it in mid-20s, let alone before my middle school graduation. And yet, here’s this ten-year-old little black girl who’s braver than I knew how to be at 23. I wept.

It matters that Tess is still a child. That, without losing any complexity or nuance to the tidal wave of emotions she’s feeling, she’s allowed to remain a kid. She uses tween language. She isn’t forced to grow up.

It also matters that she’s a young girl, specifically. While adolescent coming outs are becoming somewhat a television norm, childhood coming outs and visibly gay kids are still rare. There’s a growing legacy of young gay boys on television (Justin Suarez on Ugly Betty will always come to mind, but more recent television has also brought us Cyrus Goodman on the Disney Channel’s Andi Mack, Michael Patel — played by trans actress J.J. Tova — on the single season of Champions, and Rory on ABC’s current family sitcom Single Parents, to name a few). Still, to the best of my knowledge, there is no such legacy that we can point to for girls. Lesbian icon Shane McCutcheon famously knew she was gay from the sandbox, but we didn’t get to know her until adulthood. Across the pond on Skins, Naomi Campbell told Emily Fitch “I loved you from the first time I saw you, I think we were 12,” but she doesn’t say the line until she’s 18.

That means Tess Pearson is single-handedly scorching a new path. She’s also just this young, black girl who’s being loved and supported by her family as she figures shit out. Ask me when was the last time I saw a beautiful young black girl come out on television and have both her parents tell her that they love her more than any girl in the entire world? NEVER. The answer is, quite literally, never. None of us have. 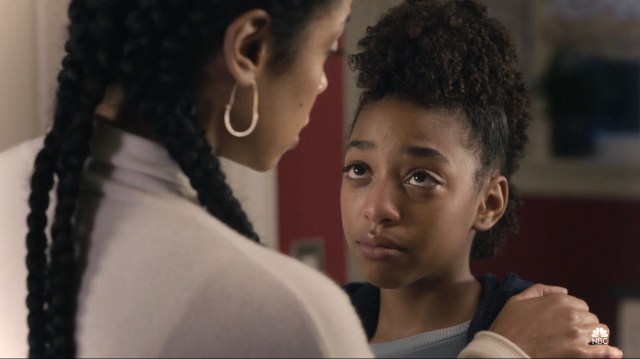 It’s a lot of weight on the shoulders of one young performance. This Is Us producer Elizabeth Berger is confident that Tess Pearson can handle it: “Obviously she’s so young, and this is the beginning of her even asking herself these questions and feeling the need to talk about it out loud… it’s something that we’re going to be just checking in with from now on. It’s now officially part of the fabric of the family and of our show.” I recommend you buckle up, because from the sounds of things, we’re just getting started.

You can catch up on This Is Us over the holiday break using your On Demand service or Hulu. The show returns to NBC in January. I hope that you find time to watch! I can’t say it enough: Eris Baker’s performance is something special.