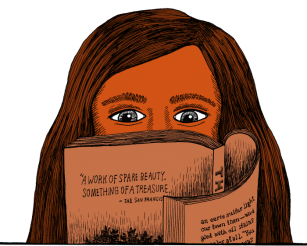 via the bold italic

HELLO and welcome to the 51st installment of Things I Read That I Love, wherein I share with you some of the longer-form journalism/essays I’ve read recently so that you can read them too and we can all know more about Magic The Gathering and Pretrial Prison Detention! This “column” is less feminist/queer focused than the rest of the site because when something is feminist/queer focused, I put it on the rest of the site. Here is where the other things are.

Bookin’ It To The Bar (November 2012), by Matt Bloom for The Bold Italic – On reading in bars!

Barred From Freedom: How Pretrial Detention Ruins Lives (November 2012), by Albert Samaha for SF Weekly – In my seemingly neverending series of articles about Prison in America, this is about how poor people who can’t afford bail are often stuck in prison for eons before their trial, and when they’re proven to be not guilty and return to the world, they find their lives are already in shambles.

The Lying Disease (November 2012), by Cienna Madrid for The Stranger – Another piece on my favorite topic of people who make up a bunch of shit, emotionally manipulate you, and leave both of your lives in shambles for no discernable reason or benefit! This one’s about Munchausen-by-Internet.

Clear Eyes, Full Plates, Can’t Lose (November 2012), by Jon Ronson for GQ – “In recent years, the “sport” of competitive eating has expanded from a Coney Island freak show into an international, well, freak show. Jon Ronson hit the contest trail with some of the circuit’s deepest stomachs—men who devour unholy amounts of chicken wings in minutes flat; women who make stupid money mowing down quesadillas—and returned with a tale that answers the only question that really matters: Why?”

Meet The Mind Behind Barack Obama’s Online Persona (November 2012), by Brian Ries for Storyboard – Obviously it’s a 31-year-old woman. This is fascinating I think.

Last Call (November 2012), by Tim Hefferman for The Washington Monthly  – “Industry giants are threatening to swallow up America’s carefully regulated alcohol industry, and remake America in the image of booze-soaked Britain.”

In Sable and Dark Glasses (October 2011), by Joan Didion for Vogue – “I never had much interest in being a child. As a way of being it seemed flat, failed to engage..”

How To Be Gay (August 2012), by Serena Golden for Inside Higher Ed (August 2012), I actually was at the University of Michigan as a student when David Halperin’s “How To Be Gay” class was offered (obviously it served as inspiration for our how to be gay tag) and there was all this controversy. This article is about Halperin’s new book and discusses the controversy around his class and the evolution of “gay culture.”

Grace Paley: The Art of Fiction (Fall 1992), by  Jonathan Dee, Barbara Jones and Larissa MacFarquhar for The Paris Review – “I will say I knew I wanted to write about women and children, but I put it off for a couple of years because I thought, People will think this is trivial, nothing. Then I thought, It’s what I have to write. It’s what I want to read. And I don’t see it out there.”