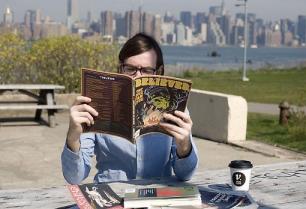 HELLO and welcome to the 23rd installment of Things I Read That I Love, wherein I share with you some of the longer-form journalism/essays I’ve read recently so that you can read them too and we can all know more about pregnancy tests and mirrors!

Six Pregnancy Tests in One Week (February 2011), by Cienna Madrid for The Stranger – “I visited Christian pregnancy centers that lure women in with false promises of medical care. Here’s what they told me about abortions, breast cancer, shame, and death.”

My Father’s Fashion Tips (July 2007), by Tom Junod for GQ – I can’t believe I even read an entire article about men’s style and father/son relationships, but you know, I did, so you better believe that it’s good.

The Mirror-Slave Dialectic (June 2011), by Autumn Whitefield-Madrano for The New Inquiry – “I’ve had a couple of friends tell me they’re surprised to find I think as intensely as I do about beauty. Their confusion is understandable: My physical beauty labor is pretty minimal. But my emotional beauty labor is another story.”

Drive-By Truckers (April 2012), by Ginger Strand for This Land – This is about serial killers who are also truck drivers and about the culture of trucking. I liked it, but it was difficult in parts because my grandfather was a truck driver for about eight years, and I kept thinking that this article would’ve really upset him, because you know, he was not a serial killer, and the picture painted of trucking here is really dismal.

Why Not the Worst? (December 2011), by Gene Weingarten for The Washington Post – “Take a small town, remove any trace of history, character, or charm. Allow nothing with any redeeming qualities within city limits — this includes food, motel beds, service personnel. Then place this pathetic assemblage of ghastly buildings and nasty people on a freeway in the midst of a harsh, uninviting wilderness, far enough from the nearest city to be inconvenient, but not so far for it to develop a character of its own. You now have created Battle Mountain, Nevada.”

The Hardy Boys: The Final Chapter (August 1998), by Gene Weingarten for The Washington Post – As you can tell, I’m really into this writer right now. This was the story of the guy who wrote all the Hardy Boys books through a system we now call ‘book packaging’ (which’s how Gossip Girl books are written, for example).

Girls, Uninterrupted (August 2010), by Jan Hoffman for The New York Times – “The two dozen 14-year-olds forming an imperfect circle in a large hall on this humid morning in the Berkshires hail from every tier of their adolescent caste system, from the anointed to the laughingstocks. In this next exercise, they must break one of their most sacred rules. They have to act like complete dorks.”

Is An ESPN Columnist Scamming People On the Internet? (May 2012), by John Koblin for Deadspin – I glanced at this story and two hours later was still glued to this story. Obviously the draw is the idea of how people lie online and make themselves into different people, and also how easy it is to be manipulated by these people. Having been there, I’m always looking for stories of others who’ve been there, looking for patterns. Anyhow, there’s also this follow up.

Interview: Lorrie Moore (October 2005), by Angela Pneuman for The Believer – – I don’t know if I’ve mentioned this yet today, but Lorrie Moore is one of my Top Three Favorite Writers of All Time (along with Mary Gaitskill and Stephen Dunn), and this is a great interview with her from an old issue of The Believer, filled with tidbits of complete and total wisdom that may very well change your life forever.

Honey, I Got A Year’s Worth of Tuna Fish (May 2012), by Amanda Fortini for The New York Times – An entire article about couponing, which you’re probably really interested in if you’ve ever had the chance to view the excellent television program Extreme Couponing.

American Writing Special – Cough Syrup For the Mind by Heidi Julvits for The New Statesman – On the evolution of The Believer.