The study looked at the way two neighbourhoods voted on Ohio’s Defense of Marriage Act in 2004, which defines marriage as between a man and woman and which became law. After controlling for various factors, the authors, which are economics professors, concluded that an increase in the gay concentration by one couple in 1,000 households is associated with a 1.1% price increase in areas that supported gay marriage. In areas that supported the act, it was linked to a 1% decrease.

According to University of Toronto professor Richard Florida in The Daily Beast,

“While politicians and voters continue to debate whether LGBT people have the right to marry, to adopt children, or serve openly in the U.S. military, a growing body of research suggests that considerable benefits accrue to those cities and metro areas that have sizeable, visible concentrations of gay men and lesbians. Income levels are higher, as are many other measures of life satisfaction.” 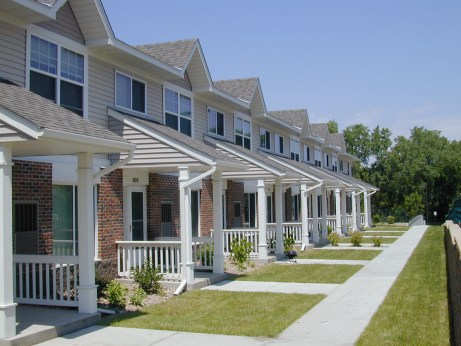 Florida references several studies, including one he conducted, as evidence. His more recent study found that metro areas with more gay people also have higher housing values, while an earlier one found a link between gay people and high-tech businesses. A Gallup study found that gay-friendly attitudes were one factor that increased emotional attachment to a given community. An economic study found a link between gay-friendly attitudes and better economic performance.

However, in an interview with the National Post, Susane Leguizamon, a co-author of the study, said,

“Gays and lesbians feel that they’re not welcome in certain areas. This study suggests it’s not just a feeling; people are responding to the presence of gays and lesbians in the ways we’d expect. […] It does serve to justify gays’ and lesbians’ feeling that they’re the targets of prejudice or discrimination in the housing market. To what extent, compared to their perceptions, is still up for debate.”

In other words, a community will only benefit from having gay people around if it is actually tolerant and supportive of them. The National Post also reports that a 2009 study found that 20% of gays and lesbians reported experiencing either property or price discrimination at least once. Additionally, having gay people around isn’t enough to create a tolerant atmosphere. Florida writes:

“The presence of LGBT people isn’t a sufficient condition for wealth creation in and of itself; gay men and lesbians are no more sophisticated, economically productive, innovative, or entrepreneurial than any other group on average. But places that attract gay people and lesbians tend to have the same open-minded attitudes and business styles that foster innovation. A visible LGBT community is the proverbial “canary in the coal mine,” signalling openness to new ideas, new business models, and diverse and different thinking kinds of people — precisely the characteristics of a local ecosystem that can attract cutting-edge entrepreneurs and mobilize new companies.”

People have been making economic arguments for marriage equality since possibly the beginning of time. Last spring, 24 high-profile businesspeople wrote a letter arguing that New York had to legalize gay marriage in order to remain competitive, since “as other states, cities and countries across the world extend marriage rights regardless of sexual orientation, it will become increasingly difficult to recruit the best talent if New York cannot offer the same benefits and protection.” Recently, BusinessWeek estimated that New York’s legalization could addd $100 million to the state’s economy, mostly for small businesses. Neil Patrick Harris even sang about it for Prop 8.

America needs to say yes to equality because queers deserve the same rights as straight people, and because there are no valid reasons against gay marriage, and all of that. But hopefully, property value studies like Ohio’s will not only keep homophobes from fleeing when some lesbians move in next door, but will make everyone a little more welcoming in the first place. Even if they’re only looking at the bottom line.