The Occupy Wall Street movement continues to grow, now reaching out to an even broader audience through these tv commercials. In support, Occupy Writers is a group of  authors who have joined together in the continually growing list on Occupywriters.com under the following banner: 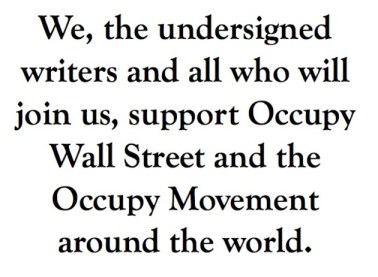 Some authors have contributed original material including Alice Walker and Judith Butler. I was struck by this excerpt from Sarah Schulman’s original piece, author of Ties That Bind:

Visiting OWS reminds me of Utopian Socialists in the 19th century, Anarchists in the 20th, the alternative consciousness politics of the 1960s– a deeply human, American and global impulse to reach for total transformation. I also think to my own experiences with social revolution: The abortion rights movement, feminism, gay liberation, AIDS activism and my current commitments to the Palestinian queer movement. As someone who has seen, and therefore believes in paradigm shift my instinct is with the sequencing of action that Dr. King talked about in his “Letter From Birmingham Jail” and that was used successfully by ACT UP. First, self-education to be the expert who truly understands the mechanics of how change can be made. Then a proposal for change, rooted in this knowledge, that is doable, winnable and reasonable.

NO I’M THE POET

NO YOU’RE THE POET

NO HE’S THE POET

NO THEY’RE THE POET

NO SHE’S THE POET

NO THAT’S THE POET

NO THIS IS THE POET

NO I’M THE POET

Rachel Maddow spoke with author Lemony Snicket (Daniel Handler) about Occupy Wall Street and his contribution to Occupy Writers in this clip which also includes the brilliance that is the bike powered generators being used at Zuccotti Park for power after having their generators confiscated by the City.

It is not always the job of people shouting outside impressive buildings to solve problems. It is often the job of the people inside, who have paper, pens, desks, and an impressive view.

Historically, a story about people inside impressive buildings ignoring or even taunting people standing outside shouting at them turns out to be a story with an unhappy ending.