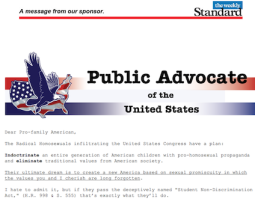 A screenshot of the email, via Salon

On Thursday, The Weekly Standard, a conservative news and opinion magazine, sent subscribers an email with the subject “Congress to mandate pro-homosexual education?”

If the word “homosexual” doesn’t send off a red flag of right-wing homophobia, then every other word in the email will. Salon‘s Justin Elliott, who first reported on the story, described it as “remarkable for its fierce anti-gay rhetoric […] the sort of language one would expect to find in Ron Paul’s 80s-era newsletters that the Standard has been so critical of.” (In the newsletters, Paul allegedly wrote about a “federal-homosexual cover-up” of the impact of AIDS.)

The email, which is a ranty, paranoid, uninformed tirade against the Student Non-Discrimination Act — renamed the “Homosexual Classroom Act” — was written by anti-gay activist Eugene Delgaudio. It opens:

The Radical Homosexuals infiltrating the United States Congress have a plan:

Their ultimate dream is to create a new America based on sexual promiscuity in which the values you and I cherish are long forgotten.

Salon has the full email, in which Delgaudio goes on to suggest that SNDA will require that schools teach students “appalling homosexual acts” during sex ed, will pressure students to “‘experiment with the homosexual ‘lifestyle’,” will not punish gay students “for propositioning, harassing, or even sexually assaulting their classmates,” and will force non-public schools to teach “a pro-homosexual curriculum and purge any reference to religion if a student claims it creates a ‘hostile learning environment’ for homosexual students.” He also encourages readers to sign his petition against the bill and to donate. The entire thing would be hilarious, if he wasn’t completely serious.

I, for one, would only support something called the “Homosexual Classroom Act.” Why yes, I do want everyone knowing about how to have gay sex! Then drunk people will stop asking me about it when I am out with my girlfriend. Tragically, however, the Student Non-Discrimination Act is only intended to “to end discrimination based on actual or perceived sexual orientation or gender identity in public schools.”

Nowhere in the text of either version of the bill (introduced in the House and the Senate) does it say anything about any of Delgaudio’s allegations. There is no mention of sex education, though I will admit that both the words “sex” (in reference to biology) and “education” appear in the bill. There are also no mentions of encouraging students to “experiment,” of forbidding religious discussion (which has no place in public schools anyway), or of not punishing gay students who commit acts of sexual assault, as Delgaudio claims there are.

Shortly after the email went out, the Human Rights Campaign called for supporters to email William Kristol, the Standard‘s editor, to get him to condemn the email. 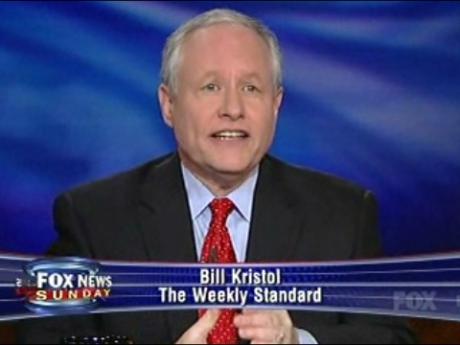 “It is alarming to see a political media outlet push this hateful rhetoric and act as a platform for the fundraising efforts of such an extremist group. Regardless of the alleged political bents of any news outlet, or any audiences, it is reprehensible and irresponsible for the Weekly Standard to partner with this fringe group. The Weekly Standard is now giving gravitas to outrageous lies about LGBT people. William Kristol should do the right thing – apologize and distance his publication from the hateful misinformation campaign of the so-called Public Advocate of the United States.”

Publisher Terry Eastland told Politico that the magazine’s “vetting system broke down… This is obviously not the sort of advertising that we would accept, nor will we accept it in the future. It was just one of these cases where an ad came in, it was not fully vetted in the way it should be, and it got out.” (It also appears that the ad, and other homophobic ads like it, weren’t really moneymakers anyway.)

In a perfect world, anti-gay ads would not happen. But they do, and the newspaper/magazine/site responsible ends up having to apologize — as the National Post, a Canadian conservative newspaper, did after running a transphobic ad last September.

However, though Kristol has been given the opportunity to do so twice (by the HRC and while on the phone to Politico), he has not. And until he does, we can only suppose that he supports it — or at least doesn’t care enough about the people his publication stands to hurt to say otherwise.

Carolyn has written 1045 articles for us.