The first time I discovered that Josephine Baker and Frida Kahlo maybe fucked each other, it was the middle of the night.

I was caught in a Google-loop during an insomnia spiral. There was a blog post that was only a few sentences long. I tried to find it recently and couldn’t. There wasn’t much to go on (there still isn’t), but even the whisper of a love affair between the infamous Mexican feminist artist and the African American dancer in Paris set my heart beating overtime.

It was one of those moments where everything I thought I knew to be true was maybe also a lie, like the first time you find out your mom had this whole other life before you were born. I’d grown up learning about Josephine Baker. She was a very in vogue Black History Month figure when I was a kid, there were posters of her in my school library. Dancer, American expat living in Paris, secret spy of the Parisian military – I always thought she was glamorous. I was the kind of kid who knew I was “girly” long before I had any queer language to call myself “femme.” Josephine Baker kicked ass in diamonds and gowns, flawless make up. She was my personal hero. No one ever bothered to say she was bisexual.

According to her biographer and son Jean-Claude Baker, it’s likely Josephine Baker had affairs with many women. Clara Smith, a successful blues singer who worked with Louis Armstrong. Mildred Smallwood, the first African American woman to appear in American Dance magazine. Bessie Buchanan, the first African American woman to have a seat in the New York State Legislature. The famous bisexual author Colette. So, why not Frida Kahlo?

Frida, after all, was much more open about her sexuality, even back then. She had rumored relationships with fellow artists Georgia O’Keeffe and Jaqueline Lamba, along with actresses Dolores del Rio and Paulette Goddard. She was comfortable playing with her gender presentation, dressing in turn as butch and femme. In 1939 Frida Kahlo, recently separated from her husband Diego Rivera, traveled to Paris for an exhibition of her work. The showcase was hosted in part by the Lourve, with Kahlo’s “The Frame” becoming the first painting by a 20th century Mexican artist to be purchased by the museum. At the time, Josephine was working for French military intelligence. 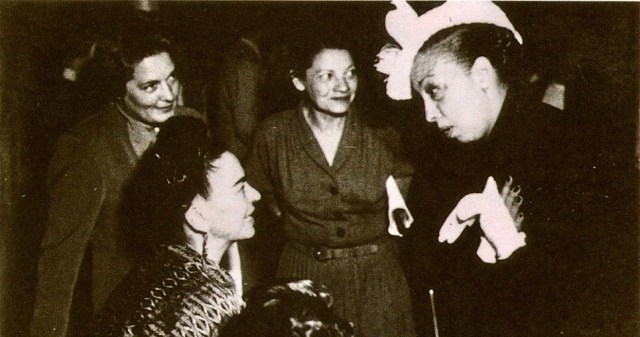  There’s this photo. One single photo. That’s all the proof we have that these two bisexual women of color shared space with each other. It’s a photo that’s spawned what can feel like a thousand loosely held together rumors. Some believe that Kahlo seduced Josephine that same night, others have Josephine making the first move and the affair taking place over several months. In the 2002 movie Frida, the two are depicted as meeting at a nightclub after one of Baker’s performances and implied to have fallen into a relationship for the duration of the artist’s time in the French capital.

This is also where everything falls apart at the seams. Josephine Baker, noted black bisexual artist, and Frida Kahlo, noted Latinx bisexual artist, shared one room together one time. To the best of any documented knowledge, everything that happens after that point is fiction or internet rumor. There are those who’d then argue that we shouldn’t give the rumors much weight or publicity. Lots of people share rooms with each other, it doesn’t mean they ran upstairs to have sex right after.

And yes, there is comfort in cold, hard facts. But when has queerness ever been left in fact? Here’s another set of facts: Josephine Baker and Frida Kahlo are, separately, two icons that meant a lot to me in my black Latina youth. I was in my early 20s before I ever heard that either was queer. What would it have meant for me to have bisexual role models who looked like me when I was 12 instead of 22? What would it have looked like to take seriously that Kahlo and Baker, if not lovers, could have certainly at least been queer family to one another. That there’s another path for kinship between queer women of color that dates back to the early 20th century and across national borders. What if there’s – gasp! – an Afro-Latinx Power Couple that eludes us right at our fingertips.

Documenting queer history is difficult. It’s nearly impossible to navigate. Early 20th century queerness is not legible in ways that you or I understand as “lesbian” or “bisexual” from our viewpoint in 2019. It’s much more fleeting. If we’re honest with ourselves, it still is. There’s what we assume or accept as fact, then, just like in life, there’s the messiness of what we can possibly never know for sure. We often make concessions for our historic queer icons, because sometimes the other choice is never seeing ourselves in a timeline beyond our own lifespan.

That’s the thing. For all of the historic queer women couples we know, painfully few of them are between two women of color. If there’s a crop of rumors surrounding Frida and Josephine, there’s a reason. I understand it intimately. It’s a desire to be seen, to imagine that there’s a you before the you that you are now. That she, too, could have found love.

Searching for confirmation if Josephine Baker and Frida Kahlo were ever lovers is maddening and fruitless. Ultimately, it even misses the point. It matters less if they slept together. It matters more, so much more, that perhaps they even could.