The first time I heard about Black Sails, it was described to me as a “lezzie pirate show.” The preview looked very male-heavy and I was sure the only “lesbians” were going to be there because it was on Starz so there could be nudity and it would be very male-gazey, but I wanted to see for myself. The first women on screen were all from the brothel, and while one WAS dressed up as a pirate, she had a different type of blackbeard, and they were all there purely for the pleasure of the fresh-faced John Silver. (Who, spoiler alert for those of you not up on your pirate lore, will eventually be one of the pirates.) Things weren’t looking great. 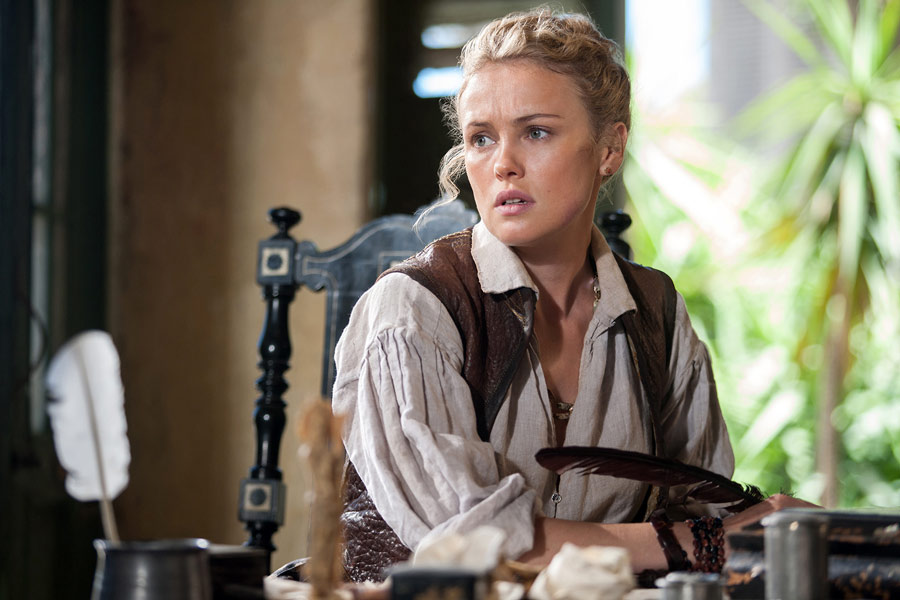 Well, not literally then. She is downstairs, in the tavern she runs. The first three things we see her do help sum up Eleanor Guthrie, arguably the Queen of Nassau:

+ She kicks a man out of her office and he leaves with his tail between his legs.

+ A man tells her to go fuck herself.

+ She tells THAT man that she WILL go fuck herself because she’s making lots of money and she’s pleased as a peacock.

It is immediately clear that Eleanor is a force to be reckoned with.

The next woman we meet is Max, who works in the brothel, but is cunning and conniving. Her first plotline involves stealing something from John Silver she can tell is valuable and making deals to sell it, manipulating “powerful” men at every turn. 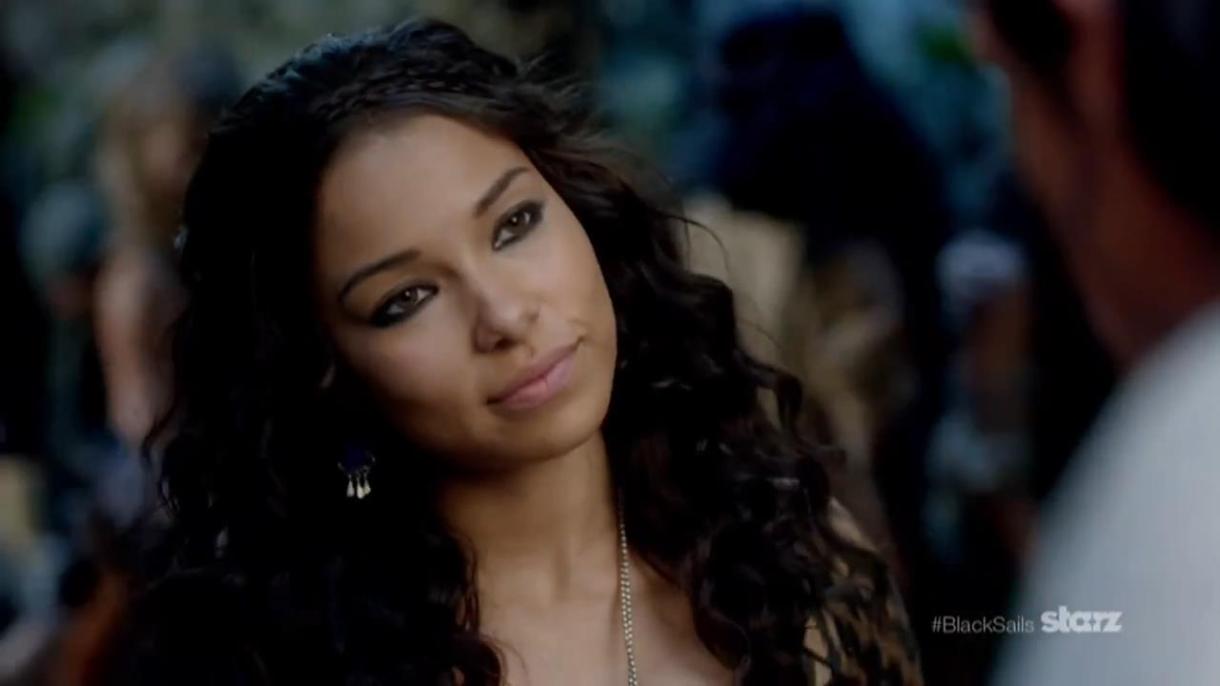 You’re right, my ideas sounds so much better when a man rephrases them and repeats them back to me.

Also, it turns out that Max is Eleanor’s personal sex worker, though it’s also clear she’s so much more. Max tells Eleanor that she will be her harbor when the waters get choppy, and while Eleanor has a hard time letting her guard down, you can tell she trusts Max.

The third woman we meet (in the pilot still!) is none other than legendary lady pirate Anne Bonny. She is all grit and glares for quite some time, but it’s clear she’s not one whose bad side you don’t want to be on (and frankly there’s not much room on her good side).

Over the course of four seasons, all three women go on very complex journeys, each on their own path, with each path intertwining with the rest. And the main theme for each journey is: they’re chasing power in a world that doesn’t want to give them power. Each woman has to decide when to assert their power, and when to manipulate the men in their life to still be in control while letting him think he has the power. They live in a time where women aren’t supposed to have any choices, any semblance of control at all, so they know they have to fight tooth and nail for every drop of it; and fight they do.

All three women are queer (and so is the male lead, which wasn’t revealed right away, so the Heterosexuals were VERY upset, despite having been fine with Eleanor and Max having sex in the pilot). Eleanor and Max are in love, but when Max asks Eleanor to run away with her, Eleanor refuses because her father has just died so she was finally getting a chance to really run things on her own. She eventually gets tangled up with some other men; some she uses for pleasure, others for leverage, but never just for love. Eleanor Guthrie can never relax. She hardly even smiles anymore.

After Max is shot down by Eleanor, she’s heartbroken, and runs away anyway, and ends up getting attacked for it. (I guess this is as good a time as any to warn you that there are definitely awful/violent sex scenes, specifically earlier in the show, so it’s definitely not for everyone.) She’s eventually saved by Anne Bonny, and even though she ends up staying on Nassau and taking over the brothel and organizing her own pirate adventure to get loot the male lead of the show, Captain Flint, couldn’t even find. 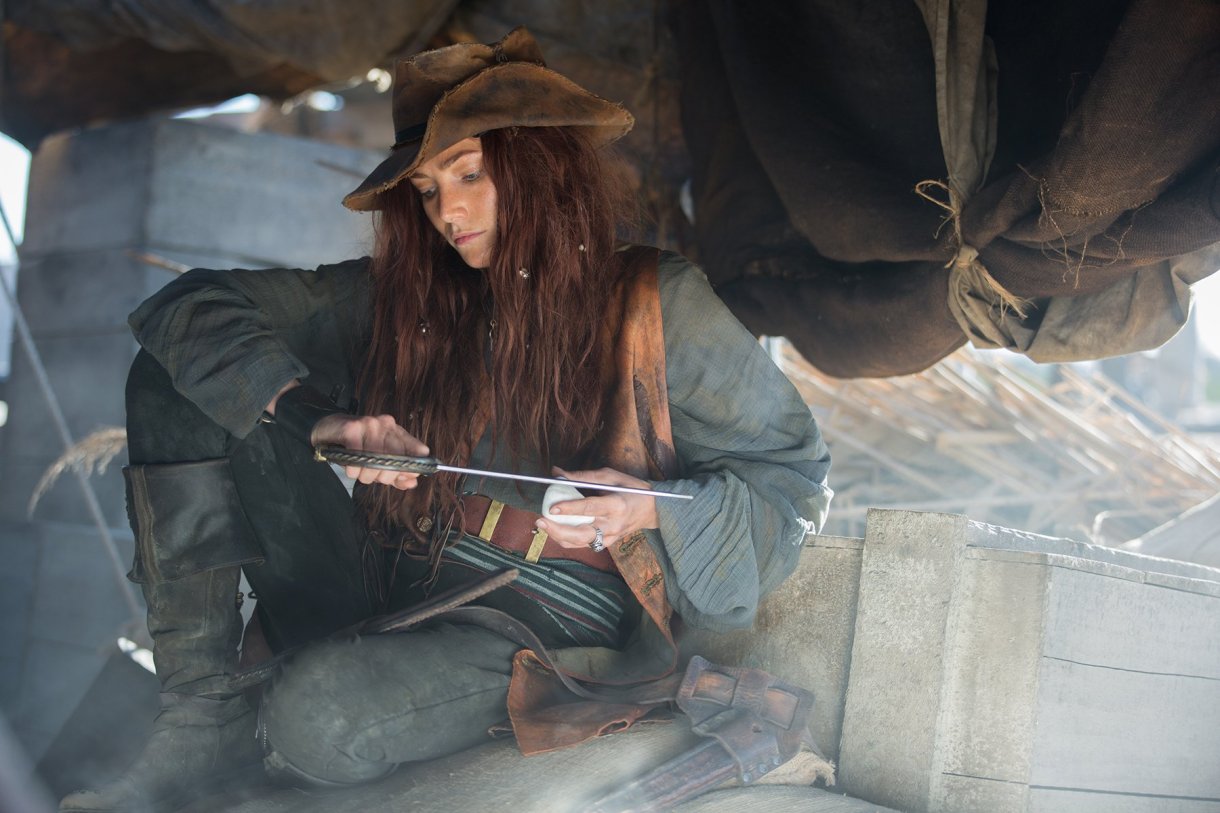 Yes, I was the best character in Assassin’s Creed 4.

Anne ends up growing fond of Max, maybe because she finally found another woman in this man’s world to respect, maybe because she’s beautiful and smart, maybe all of these things, so the two women end up being in a really interesting polyamorous relationship with Captain Jack Rackham.

Over the course of the three seasons, Max and Eleanor’s stories went on a somewhat inverse trajectory; Eleanor went from being in charge to being a prisoner, Max went from being a sex worker to being in charge. Eventually Eleanor clawed her way back up to the highest position she could, and now the two women find themselves side by side again. They are forced to put their history aside and work together to ensure things don’t slip out of both of their hands.

Max and Anne’s relationship is also fraught; it’s clear Anne loves Max, but it’s possible Max was just in it all along to try to repay her for saving her. Max helps Anne unlock parts of herself she never knew were locked in the first place, and it rips your own chest open right along with Anne’s. Eventually Anne goes back to her one true love: the sea. She swings on the ropes of a pirate ship, and when we last saw her she was headed into battle.

Black Sails, a show about pirates set in 18th century Nassau, could have easily been about only men. The show is touted as a prequel to Treasure Island, and Eleanor and Max are neither in the novel nor in history books. Anne Bonny is the only woman (as far as I know) that is a real historical figure (one of the only famous female pirates, along with Mary Read, who is not on the show but was potentially romantically linked with Bonny). So lesser creators might have used all that as an excuse to exclude women from the narrative entirely; instead, they put them at the center of it.

Black Sails is so much more than a “lezzie pirate show.” It’s about finding humanity in a violent and lawless time; about finding, keeping, and cultivating power when those around you are determined to strip you of it; about knowing who to trust and learning whether or not it’s even possible to trust anyone in the pirate business. It’s about the immense strength of women, despite and in spite of what men assume of them.

Max goes from wanting to run away to wanting to take over the world, watching her eyes go from warm and comforting to wild and desperate, is quite the journey. She’s smart and beautiful and she refuses to be underestimated. She even has a part in securing the legend of Long John Silver. Anne goes from being more or less content to be Jack Rackham’s mistress to figuring out her own desires and motivations. And there are other women who rise to important places in the story as the seasons go on. It’s a wonder to behold.

And Eleanor. Eleanor Guthrie is one of the best anti-heroines I’ve ever seen on TV. You’re always rooting for her, but you’re also yelling at her. You watch her make these impossible decisions, and even when you know it’s not what you would have done, you can’t imagine having to make the choice in the first place. You’re on her side more often than not, even against your own instincts, and your heart breaks for her over and over again. Plus, the entire room crackles with electricity when her and Max talk over their unspoken feelings to discuss politics and other Serious Things.

Tonight the final season of Black Sails kicks off. It will take our fierce leading ladies right into the throes of war, and it’ll be a miracle if anyone makes it out alive — men included. We can make some fairly safe assumptions about who will make it, based on who ends up in the Treasure Island story, but there are still plenty of lives at stake. I wish I could say I thought all three queer lead women were going survive, but that seems like setting myself up for heartbreak. I don’t know when this season was written, or even filmed, so everyone’s fate could have been sealed before Bury Your Gays became something even mainstream media couldn’t avoid (aka BL, Before Lexa). But I really, really hope we won’t have to add any of these women to the devastatingly long list of fictional queer characters we lost.

We’ll find out, for better or worse, when the final season begins tonight.