It didn’t take much to convince me to watch The Perfection. Literally the sentence was, “It appears Allison Williams plays a lesbian in a new trashy horror flick on Netflix” and I was in. I didn’t need to watch a trailer or read a description, honestly it could have been any 2/3 of that sentence — “Allison Williams plays a lesbian, ” “Allison Williams in a trashy horror flick,” AND “lesbian trashy horror flick” are all phrases that are guaranteed to get me to watch something. (Side note, this would also work if I had known Logan Browning was in it. I would watch Logan Browning watch a movie. I love her.) So I settled in, expecting the same old, same old and… I… well, nothing could have prepared me for this movie. It wasn’t a slasher flick by any means, and it didn’t necessarily feel like a classic horror movie… I think technically it’s a psychological thriller? All I know is, however you shake it, it was certainly macabre.

And I’m here today to lure you into this same trap. Because I’m that friend who will say, “Oh my god this is disgusting, taste it.” And if I find a gif of a man dressed as a unicorn that makes me deeply uncomfortable I WILL send it to everyone I know. So I’m here to ask you to watch this movie, if for no other reason than to convince me that I didn’t hallucinate the whole thing.

Oh by the way, if you ever had a trigger that needed warning, this movie has it. Vomiting, sexual assault, bugs, body horror, no seriously so many bugs, self-harm, raw meat, did I mention the bugs, everything.

The Perfection is about a woman, Charlotte (Allison Williams), who was on track to be a professional cellist when her mother got sick and she had to spend ten years caring for her. When her mother dies, she meets up with the teachers of her old music academy and is introduced to the girl who did stay on that professional track, Lizzie (Logan Browning.) Honestly that’s all I can tell you without spoiling too much, because there are so many twists and turns that nothing I say would make sense until you saw it anyway. 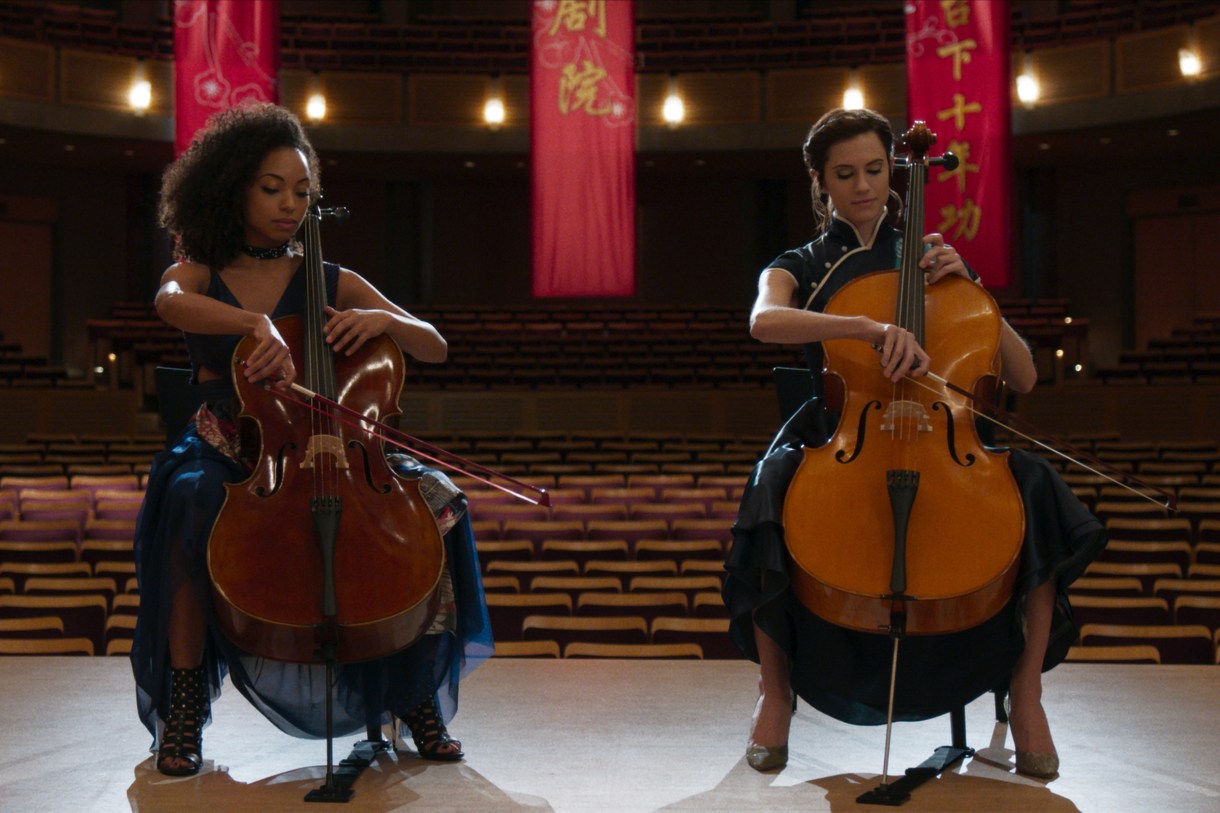 I will say, the first 25 minutes of this movie are stunning. Well, the first three minutes are a little morbid, but the next 22 minutes include Allison Williams being stunning and Logan Browning being stunning and them flirting with each other in a way that is truly and completely ELECTRIC. I cannot recommend those 22 minutes enough. Both women are extremely talented and that fact was never lost on me, no matter how batshit this movie got. And let me tell you, it got batshit. We went from sexy, flirty funtimes and took a sharp left turn into a contagion movie. I’ll admit, they almost lost me there. But then it took another turn and threw me for a loop or three. This movie is broken into sections, and every section peels back another layer of the story and teaches you that nothing is quite as it seems.

Would I recommend this movie? I don’t know! I felt very, “What the hell did I just watch?” about it when it was all over. But I will tell you what: if I was only grading it on the queerness/how they treated the queerness, it would get an A+. With the exception of Lizzie asking Charlotte if she’s ever been with a woman before, it’s not addressed. It’s not even one of the many story threads, it’s just a fact, that these are two women attracted to each other.

SPOILERY PARAGRAPH AFOOT, SCROLL TO THE END IF YOU WANT TO BE COMPLETELY SURPRISED

I sort of wish I knew if this movie was intended to be a metaphor for feminism in the “Time’s Up” era, or a parody of it, but since Allison Williams and Logan Browning are part of it, and I trust them implicitly based on recent projects/interviews I’ve heard, I think it was meant to be a metaphor for breaking out of the cult of the patriarchy. Maybe even specifically in Hollywood. It’s also very possible there was no metaphor or deeper meaning and it was just a fucked up movie for fucked up people like me to watch.

You know, I played Peter Pan once, too.

In the end, The Perfection reminded me of all the campy horror movies I’ve watched over the years but fulfilled my wish that they were gayer. With the exception of Mother May I Sleep with Danger and Neverknock (maybe a few others, but it’s a very short list) most horror movies will have two girls making out during a game of truth or dare before they get slashed to death by either someone they thought they killed the summer before or the ghost of someone they killed the summer before. It was nice to see genuinely queer women be the center of this story, however off the rails the story may be. Why CAN’T we have a Saw of our own, yaknow?

So while I don’t feel 100% comfortable giving it a blanket recommendation, and while I can’t say I’ll ever watch it again, I am glad I watched it. My true recommendation would be to get together a bunch of your least squeamish friends, tuck into some booze (or an excess of sugar) and make it a group activity. At worst, you’ll bond in feeling like you shared a hallucination of this sometimes sexy always strange movie. At best, people will be screaming, laughing, covering their eyes, and hopefully, in the end, feeling a little triumphant.