Disney dropped the first of its final three mega-episodes of The Owl House over the weekend and it was everything fans could have hoped for — especially us LGBTQ+ pals. When season two was at its end, our ragtag band of youthful witches battled Belos on the Day of Unity and ended up trapped in the human realm, on Camila Noceda’s doorstep. “Thanks to Them” should have been ten episodes, but because Disney pulled the plug on the beloved series way too soon, showrunner Dana Terrace and her team had to pack a whole heck of a lot into one sitting, and they did it beautifully. There’s Luz & Co. getting settled into the Noceda’s home with Vee, Luz and Hunter dealing with the things they learned about themselves in the finale, Luz coming out and introducing her mom to Amity, brainstorming ways to open a portal back to the Boiling Isles, solving the mystery of the artifacts Phillip and Caleb left behind, and then a BIG BAD BOSS FIGHT. It’s swoony and heartbreaking and nuanced and smart and hilarious and — did I mention heartbreaking? Because it’s heartbreaking!

I don’t want to spoil too much. I know a lot of people have to wait for Disney+ to release the episodes, and right now it’s just available on The Disney Channel (and Disney Now, which you have to log into with a cable provider) — so I’ve decided to run down the fuck-it-we-do-what-we-want gayness that set the backdrop for the final season. These 45 minutes were gayer than every other gay Disney and Marvel thing combined, and that was clearly very on purpose.

Luz, of course, comes out with a montage video by her (wink, wink) production company, Lumity Studios. 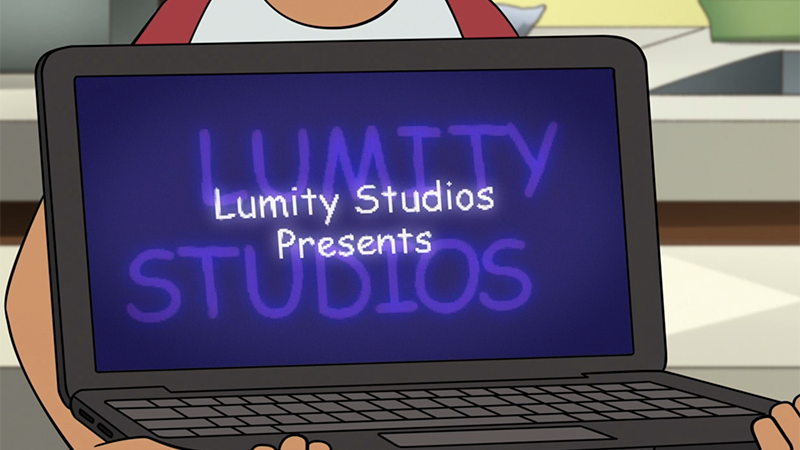 She says she’s bisexual! Puts a label right on it! Do you know how rare it is for a TV character to say “bisexual” and for cartoon characters to use a label at all? 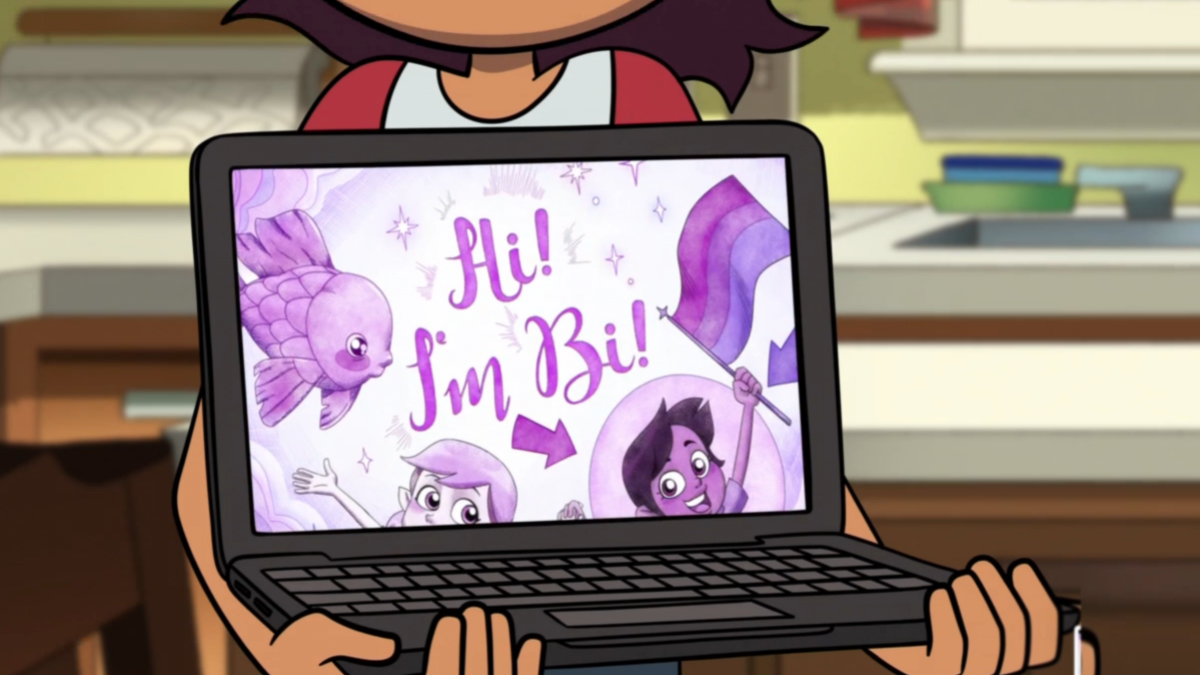 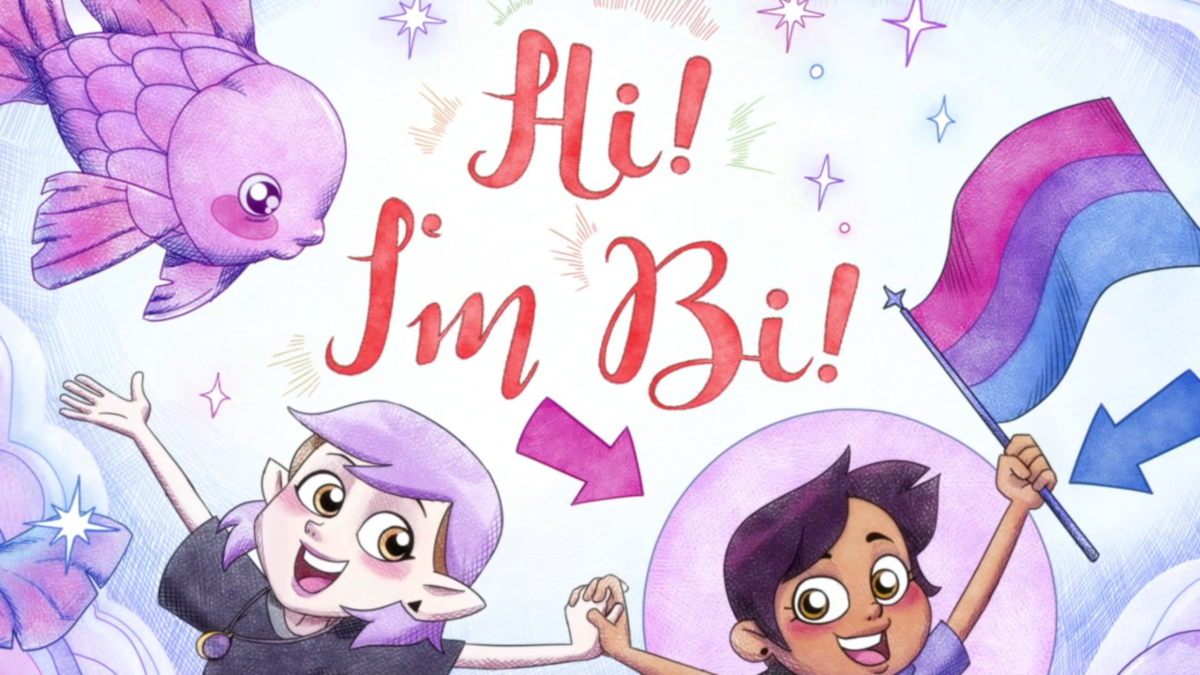 Camila, of course, is delighted with the news and pulls Amity and Luz into a group hug while Gus transforms the kitchen into a queer paradise. 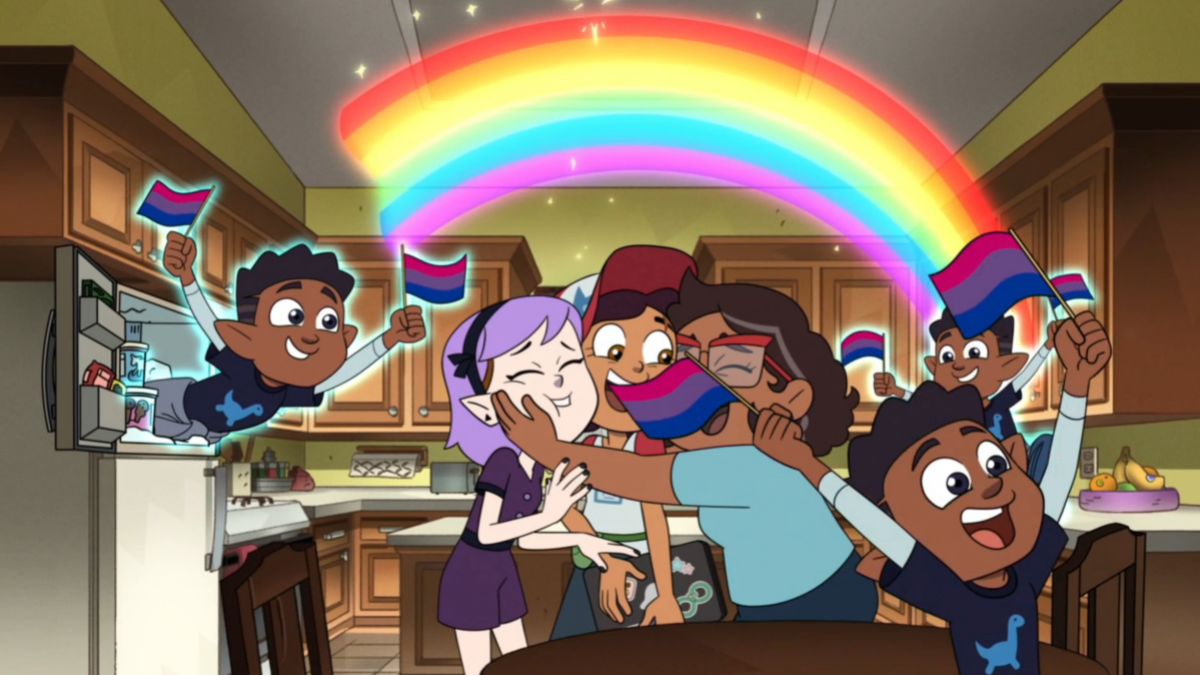 Mom of the Year, Camila Noceda, she’s got a bisexual LOVE bracelet on her nightstand. 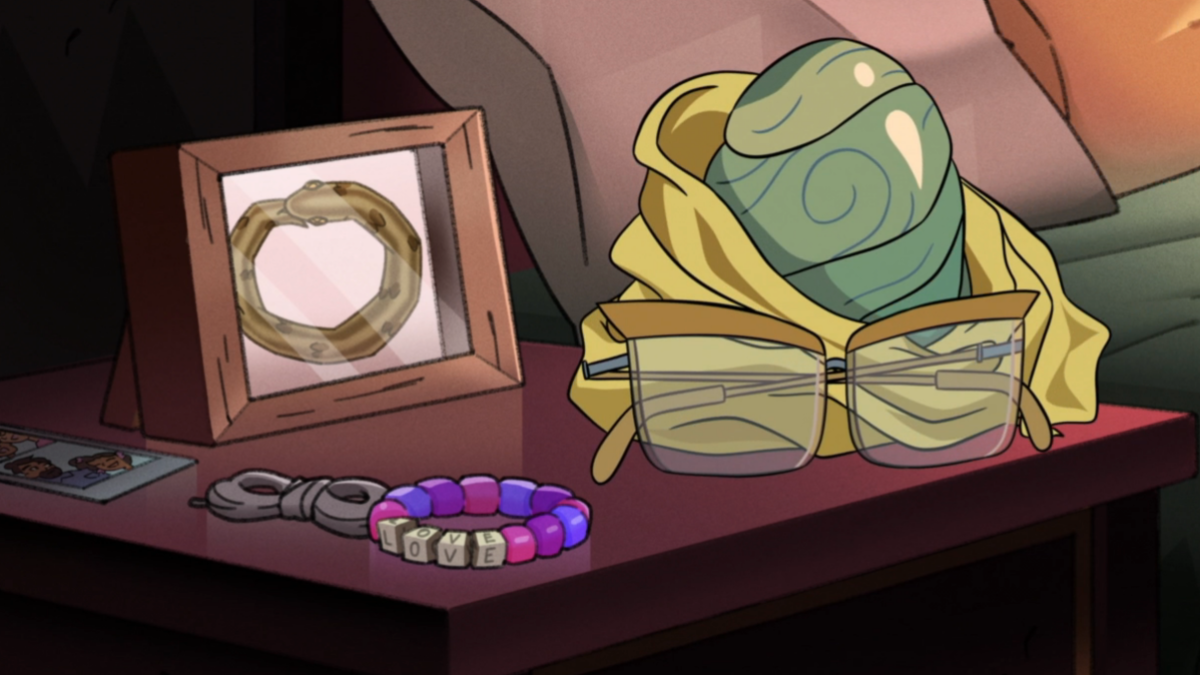 Oh and she immediately puts on — and never takes off — a gay pride pin. 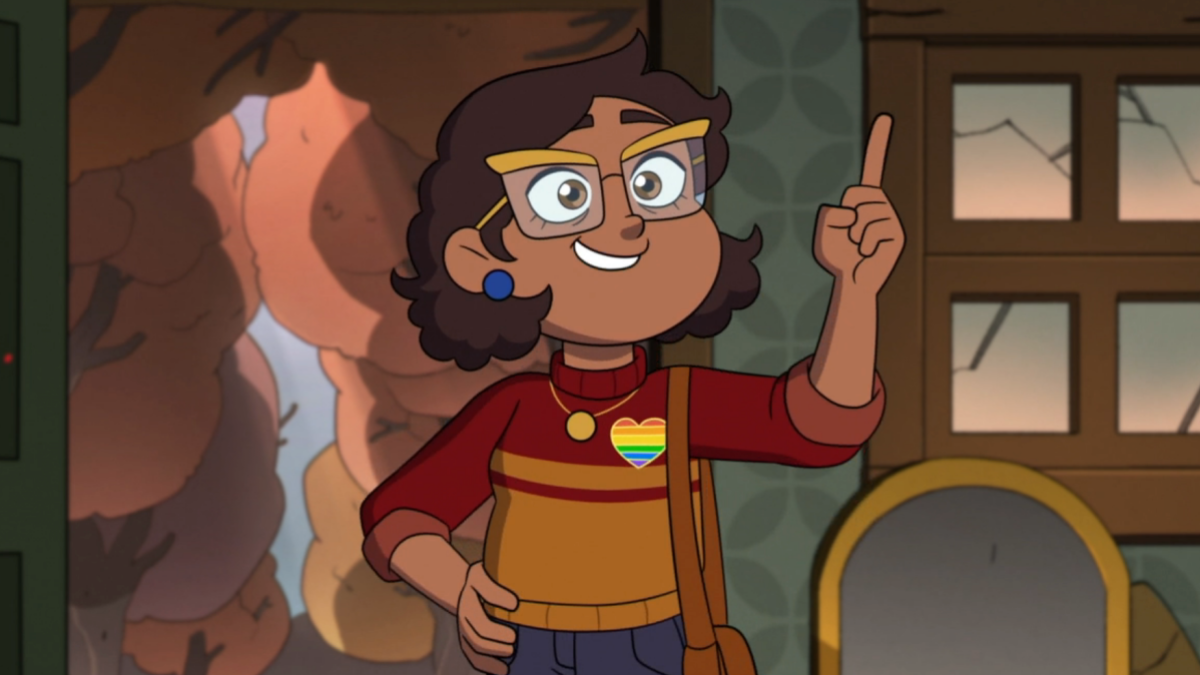 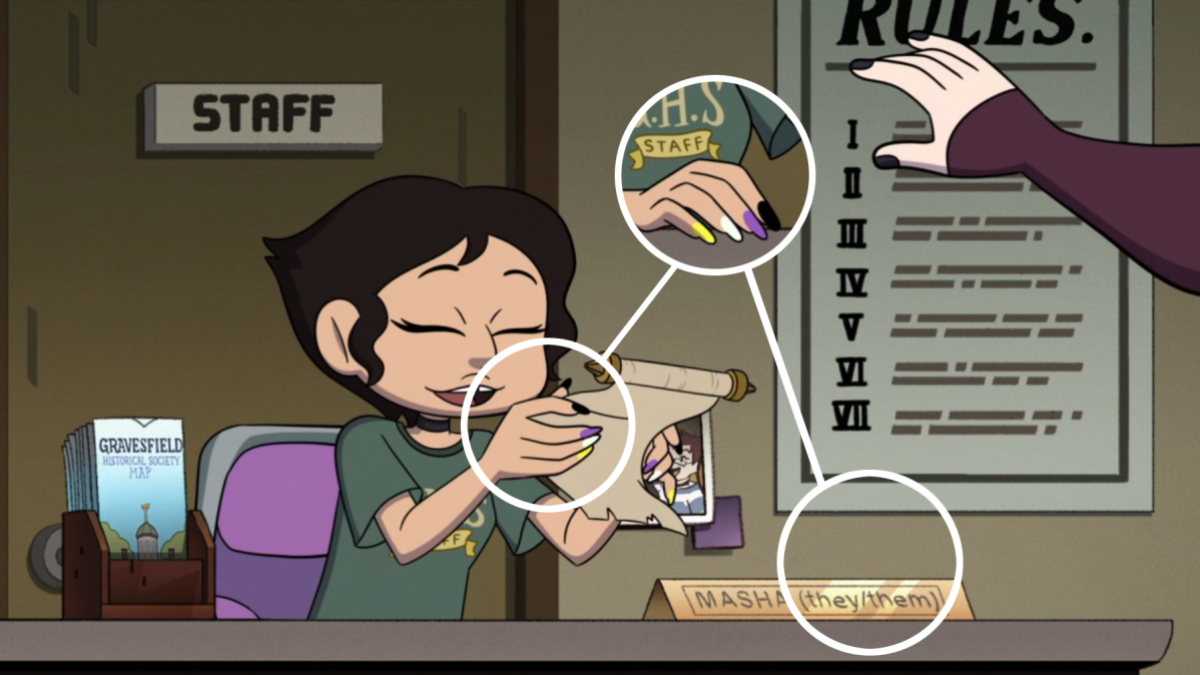 And they’ve got a crush on Vee who’s crushing right back on them. 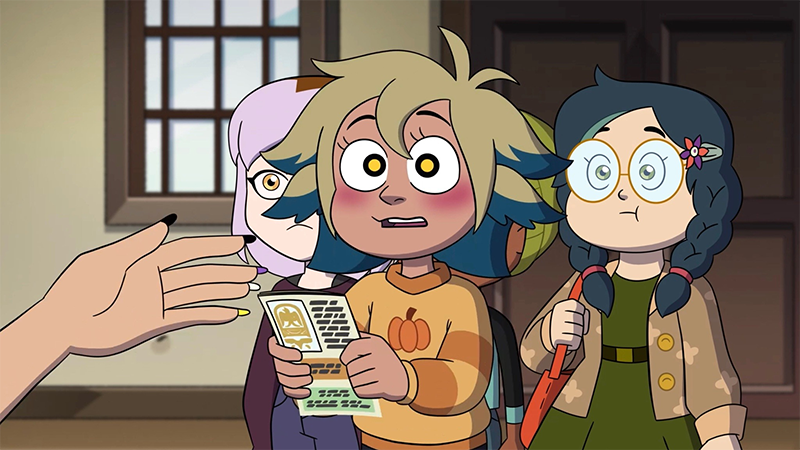 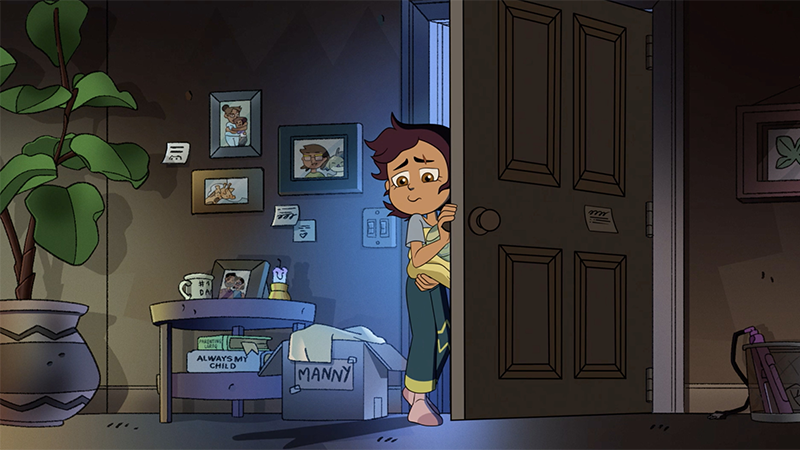 Lumity in the rain! 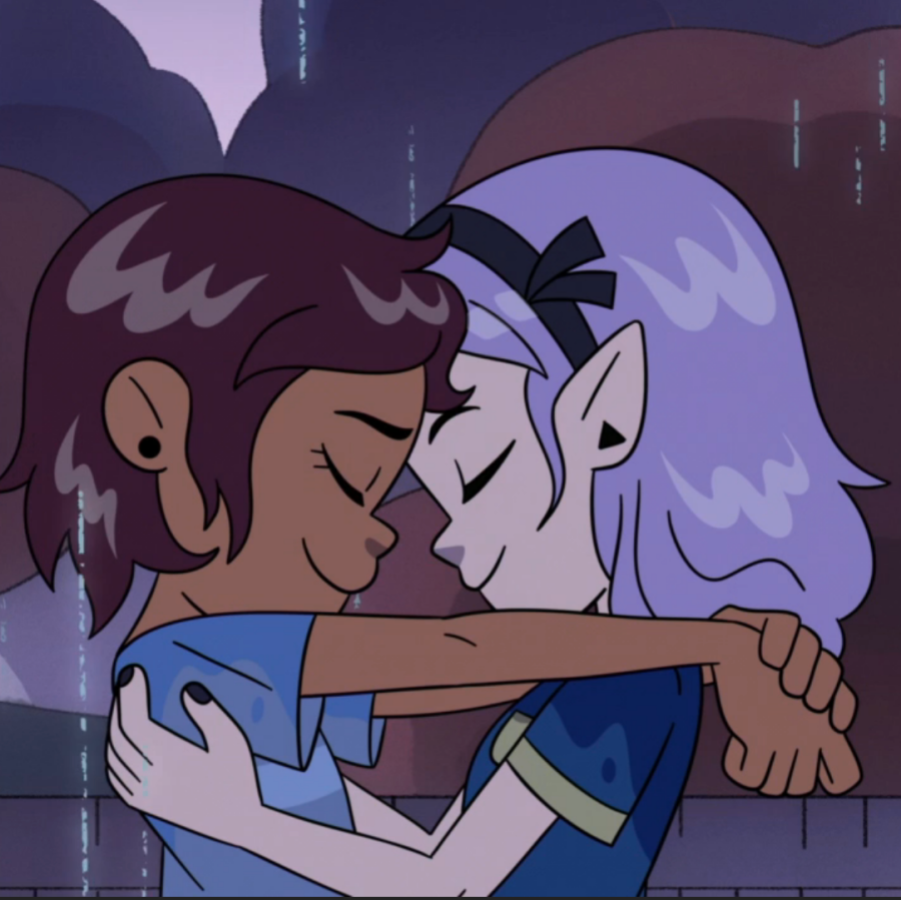 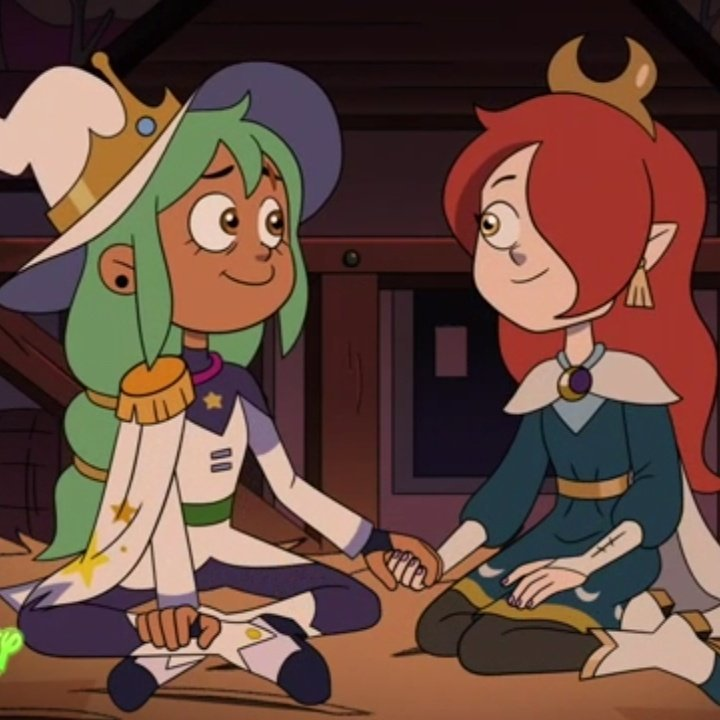 A page of Willow’s scrapbook with lesbian and bisexual stickers! 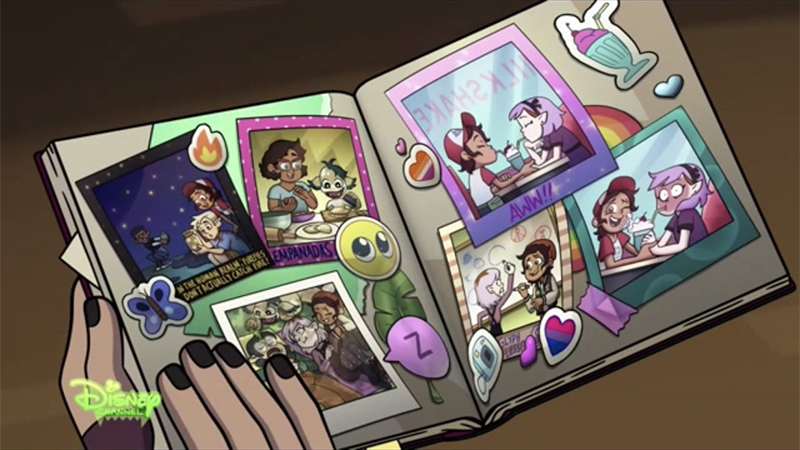 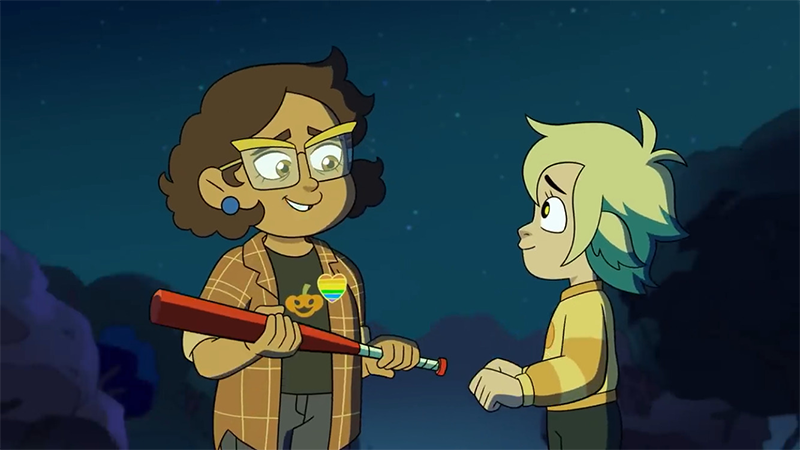 I can’t wait for everyone to watch so we can discuss this at length forever! The second mega-episode of season three lands in… 2023. Both too far away and too soon for it to be over.

Update: Disney Channel has put the whole episode up for free on YouTube — and it’s the #1 trending video!