The same day as Donald Trump announced that he will withdraw the United States from the Paris Agreement governors from California, New York and Washington announced that they were forming the U.S. Climate Alliance to do what they could to meet the goals of the historic Paris climate agreement. Within the next week, state after state announced that they, too, would join Washington, California and New York. As of June 8th, the Climate Alliance includes those states listed above, as well as Connecticut, Delaware, Hawaii, Massachusetts, Minnesota, Oregon, Puerto Rico, Rhode Island, Vermont and Virginia. The mayors of hundreds of cities have also pledged their support for the U.S. Climate Alliance, though they have their own climate group, the Mayors National Climate Action Agenda. 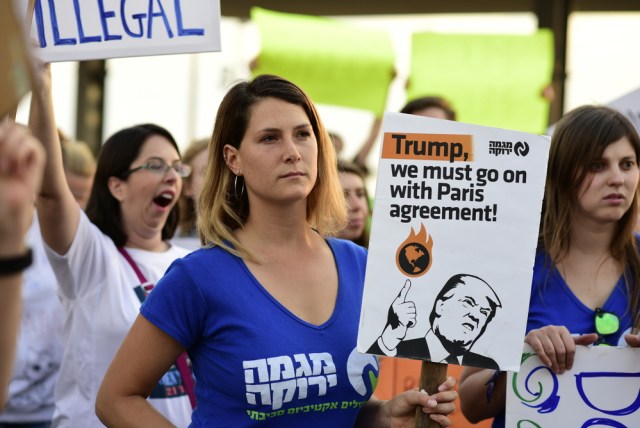 This person is in Israel, but I echo her sentiment.

In these early stages, it’s unclear what this alliance can do to help mitigate climate change if the U.S. government doesn’t also participate. When we entered the Paris Agreement in 2015, the United States set a goal to emit 26-28% less carbon by 2025 than we did in 2005. Since the 12 states in question only make up 18% of the U.S.’s total carbon emissions (not including Puerto Rico — comparable data didn’t exist), they couldn’t meet that goal even if they suddenly stopped emitting any carbon at all. The Alliance is trying to see if it can create a new, more achievable goal to submit to the United Nations alongside other nations’ goals, but the Paris Agreement was created among federal governments, so their query may not be recognized.

Although the details of the U.S. Climate Alliance remain murky for now, they’ll hopefully clear up in days and weeks to come. The important takeaway from this bit of news is that governments within the United States have not given up hope in helping mitigate climate change, which is important for all of us, but particularly us queer folks, because, not-so-fun fact, climate change will disproportionately affect LGBTQ people.

It’s important to note the intersecting nature of adverse effects of climate change against LGBTQ people. A 2012 Williams Institute study on poverty found that queer people are extra vulnerable to poverty because of discriminatory housing and hiring practices, lack of support from their families, and the extra cost of bearing children compared to straight couples. Queers of color and people who aren’t cis men face even higher rates of poverty. That same 2012 study found that among same-sex couples, African-American lesbians were found to experience the highest rates of poverty, and the unemployment rate for transgender people was four times higher than the national average. Studies have shown that the poorer you are, the worse you’ll feel the effects of climate change.

Sea level rise is one area that queers face disproportionate harm, particularly poor queers. Most of the cities and states that LGBTQ people live in are on the coasts. According to this super interesting and troubling map, pretty much all queer hubs by the water are in some degree of danger, but states on the southeast coast will see the largest damage from sea level rise. A common misnomer is that sea levels will rise because warming global temperatures melt floating icebergs. That is partially true, but it’s not the whole story. Ocean water expands as its temperature goes up. This is called thermal expansion, and most of sea level rise can be attributed to it. The melting of ice sheets and glaciers — that being ice that is stuck to land, like in Antarctica and the Arctic — is another major contributing factor to sea level rise.

As Peterson Toscano says, homeless and senior LGBTQ folks are at a higher risk of the effects of climate change. Directly speaking, LGBTQ seniors are at risk of the negative effects of heat waves and freezes. In general, LGBTQ seniors face widespread discrimination, meaning that from the get-go they face a more difficult life as they get older and impacting their experiences of climate change. They may face discrimination at doctors’ offices; they may have had trouble finding consistent work due to their sexual orientations, causing their incomes to be lower and making it hard to afford heating and cooling devices. Secondarily, over their lifetimes, they may have been alienated from their families, so there is less of a support network there to come check on them when the weather gets bad.

Toscano mainly highlights homeless LGBTQ teens, and while 20-40% of homeless youth identify as LGBTQ, about the same proportion of homeless adults are LGBTQ also. LGBTQ people already face more problems than straight folks as they experience homelessness. Even in liberal cities and states, finding new housing may be difficult due to sneakily or blatantly discriminatory practices, and going to a shelter may be unsafe because many shelters enforce a strict binary or are run by unaccepting religious organizations. As climate change wears on, storms will be more severe, making it extra unsafe to sleep on the streets.

You need some good news now, I’m sure. I know it looks grim. I know it’s an uphill battle. I think the silver lining here is that climate change isn’t stingy with its rewards. If the world doesn’t do anything to try to mitigate harm, we all feel the burn to some extent. However, if even most of the world does literally anything to help, it helps everyone else out as well. By joining the U.S. Climate Alliance, the governments of these fine states are doing what they can to keep all of us queer folks from having to relocate due to rising sea levels, or having to choose between turning on the AC or buying food, or having to decide whether to sleep in a homophobic shelter or in a hurricane. That’s not to say we aren’t still likely to feel some effects anyway, because we have definitely fucked up the Earth, but always remember that the Paris Agreement shows that the Earth is trying.

If you live in a state that’s not currently part of the U.S. Climate Alliance, I urge you to call your governor and tell them how crucial it is to mitigate climate change. Specifically, I urge Coloradans, because your governor is on the fence; Texans, because your state produces 10% of our country’s carbon by itself; and North Carolinians and Pennsylvanians, because a couple of your representatives have some very poor information about climate science.

As an optimist, I’m super psyched about the U.S. Climate Alliance. Though it’s vague now, I have hope that over the coming weeks, more details will emerge, tangible steps will be unveiled, and additional states will join the fight. The Paris Agreement is a flawed plan, but I firmly believe that implementing a flawed plan to mitigate the effects of climate change is better than not having a plan at all. This week has renewed the hope in me that, even with a shitshow of a federal government, we can still save the world.

Kay is a PNW native living far from home in Massachusetts with her fiancee and her fiancee's plants. She is a writer, editor, environmental educator, barista, and mayor of a beautiful (albeit neglected) Animal Crossing village.

Kay has written 1 article for us.