I’m just an absolute sucker for a cute queer romance between two ladies, and so when I found out about the new comic Lucky and Scary I was tickled pink. Here we have the Tale as Old as Time: a cute blonde femme with a penchant for dressing like Sailor Moon meets a “very gender neutral chick” with a sweet leather jacket and the two fall head-over-heels in love. Writer and artist Hannah Hallman shows us little peeks into their relationship in these charming one-shots that show us both the highs and the lows of queer love. 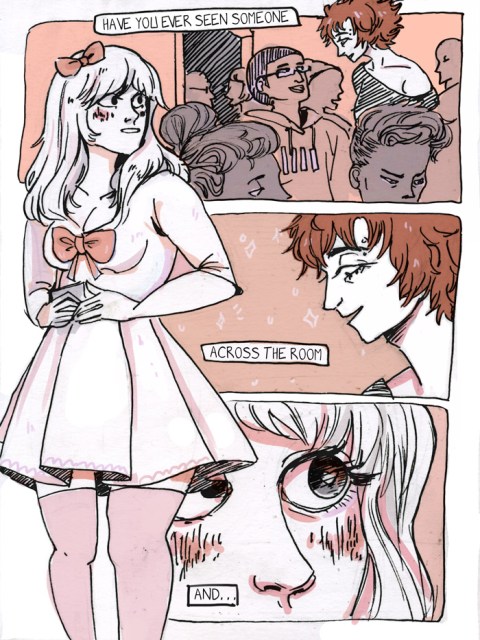 The first two comics, where Lucky first sees Scary across the way at a party, were able to so perfectly sum up a feeling that many of us probably have felt before. The look on Lucky’s face and the way she starts spilling her drink are perfectly spot-on. I mean seriously, who among us hasn’t spilled a drink because of a cute queer we saw at a party? And it perfectly sets up the rest of the comic. Lucky sees Scary, imagines spending a lifetime with them, and then the rest of the comics start to show us that lifetime. Plus, we’re able to get some broad-stroke ideas about the characters. Lucky is a blushing femme, with bows in her hair and on her dress and a flared skirt. Scary is tall, androgynous and cool. 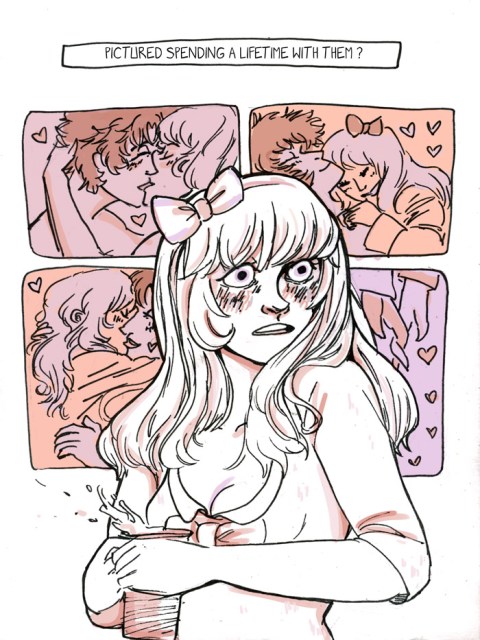 Many of the comics show little insights into their relationship. We get to see Scary bragging about how she met a girl who is “so fucking cute holy shit” to one of her friends, only to realize that she accidentally sent it to the just-added-to-her-contacts Lucky. In more cellphone adventures, we see the cuteness of Lucky calling Scary, prompting the song “Lucky” to play as a ringtone. That’s just one cute thing these two do together. I love seeing them flirt together and dote on each other. Even in these few comics, you can really see how head-over-heels they are for each other.

In some of the more recent comics, we get to see a little bit into the world of Lucky, where she’s harassed by men on the bus, asking if she has a boyfriend while she’s standing there with her girlfriend. Not only does she put up with zero percent of this guy’s shit, but her girlfriend is super supportive of her. In the next comic, they’re hanging out with a friend who  says one of a femme’s least favorite things to hear, “You’re too cute to be gay!” Her reasoning is that since Lucky looks the way she does, she should expect guys to hit on her. Again, Lucky knows just what to say and responds with a simple middle finger and the two words “Fuck that.” And once more, Scary is there to back her up. I really like how Scary is right there with her, but doesn’t have to act “chivalrous” and step in, not letting Lucky defend herself. 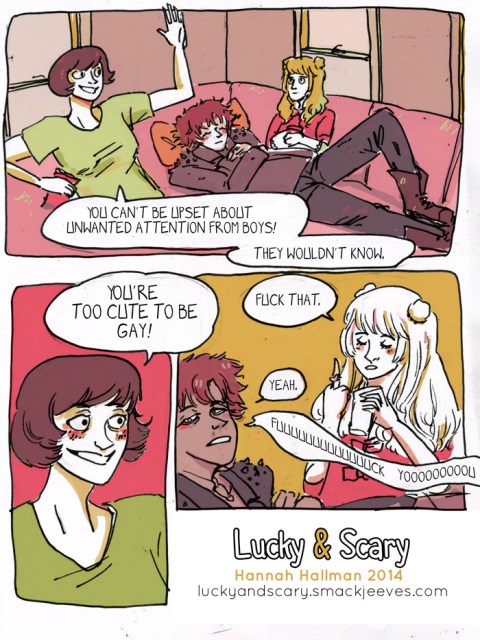 In a genius move, the art style somehow allows for Lucky to be totally cute, feminine and fluffy, while Scary looks rough, butch and too-cool for school. Using just one art style, she makes the characters look so different. Lucky looks like she’s straight out of a Magical Girl manga. Scary looks like an anime hero, and she’s almost tsundere with the way she acts like she’s an apathetic badass but then is so tender and sweet when she’s around Lucky. If you’re looking for a comic full of blushing girls, look no further. Hallman has recently started adding more color to the comics, which takes them to a whole other level and really makes the art pop. I really enjoyed them when they used pinks and purples and reds, and I enjoy them even more now.

There aren’t many of these comics yet, but the ones that are here are wonderful. The writer has said that each chapter is going to be little vignettes so that we can get to know the couple that way instead of through one long story. These characters and their interactions are completely adorable, and it’s always refreshing to see things featuring queer ladies in love. On her tumblr Hallman has said that she has plenty more comics nearly ready, so be on the lookout for more of these wonderful one-shots soon!