Picture it, you’re scrolling through Instagram and all of a sudden there are five very adorable, masc-of center folks on your feed in what is clearly a very 90s boy band-esque photo. If you’re like me, you squeal and immediately have to learn more. The group is called BOI BAND, and they’re the perfect combination of that old school boy band style and today’s queer aesthetic.

I feel like it’s worth noting that they offered their astrological signs. I didn’t even think of it, and honestly, I’m embarrassed. But the BOIs came through and provided me with this crucial information. As an Aries, I was very excited to share a sign with more than one member of the group.

So how did BOI BAND come together? For Sonya, it was just something fun, and never meant to become as big as it has. “I was in another cover band and I had a lot of fun, but it was like an eighties tribute band,” she explained. “And I’ve always wanted to do boy bands and pop music because I grew up on that and I wanted to just have a little more fun and make it queer centric. So, I was talking to Mandy, our manager, and I was like, “Hey. Do you want to try this, let’s just do some for fun. Just do some gigs, maybe play some Pride shows.”” Kristin and Kayden joined the group, and they were initially a trio.

As they began their journey as a cover band, they got some truly epic opportunities, including playing Dinah in their first year. But something happened that none of them could ever expect. People were so into the group.

“We realized that people were really into the concept of an androgynous masc presenting queer boy band. And we got so many supportive messages of, ‘This is awesome, this representation is so cool.’ So then we decided we needed to evolve to do original music,” Sonya said. 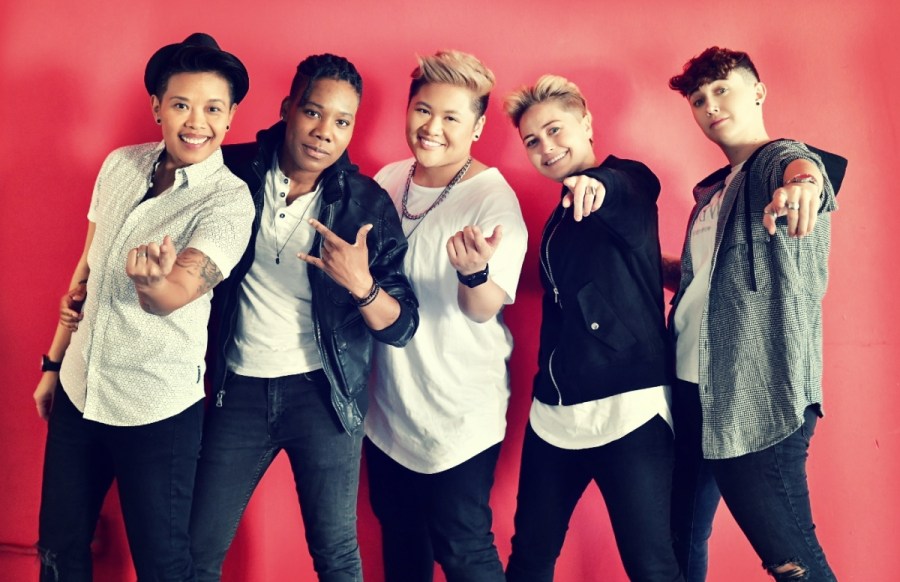 She knew the group needed to expand (after all, any good boy band has five members. I said what I said). They held auditions, and that’s how Mik and Coda joined. With them, they brought a deeper understanding of music production and songwriting. This allowed them to begin writing their own music.

That songwriting process turned into BOI BAND’s four song EP Mainstream. Three members of the group, Mik, Coda and Kayden have written and produced the songs. Kayden recently graduated from sound engineering school, and Coda moved in with them to work on the EP. As songwriters, she explained, it was important to make sure that the group felt represented musically, which IMO, is a very boy band mentality. For example, Mik loves country music, and there are some country influences in there for them (it features prevalently in their song “4 Letter.”)

Mainstream is a solid blend of those traditional boy band sounds and styles, but also contemporizes them. “Ferris Wheel,” the EP’s lead single, is that classic boy band love song. The harmonies are tight, and it’s sweet in a way that’s swoony but not overly saccharine. But beyond that, they have an inherently and distinctly queer sound and message. And that was equally important to them.

“We’ve been talking about how, if we were any more to the left or to the right of time, we would have been too early or too late,” Mik said.

“[Since COVID] everyone was almost like, open to different artistic styles and new. And now that we’re here, I feel like it, we couldn’t have come in at a better time,” Kayden added. 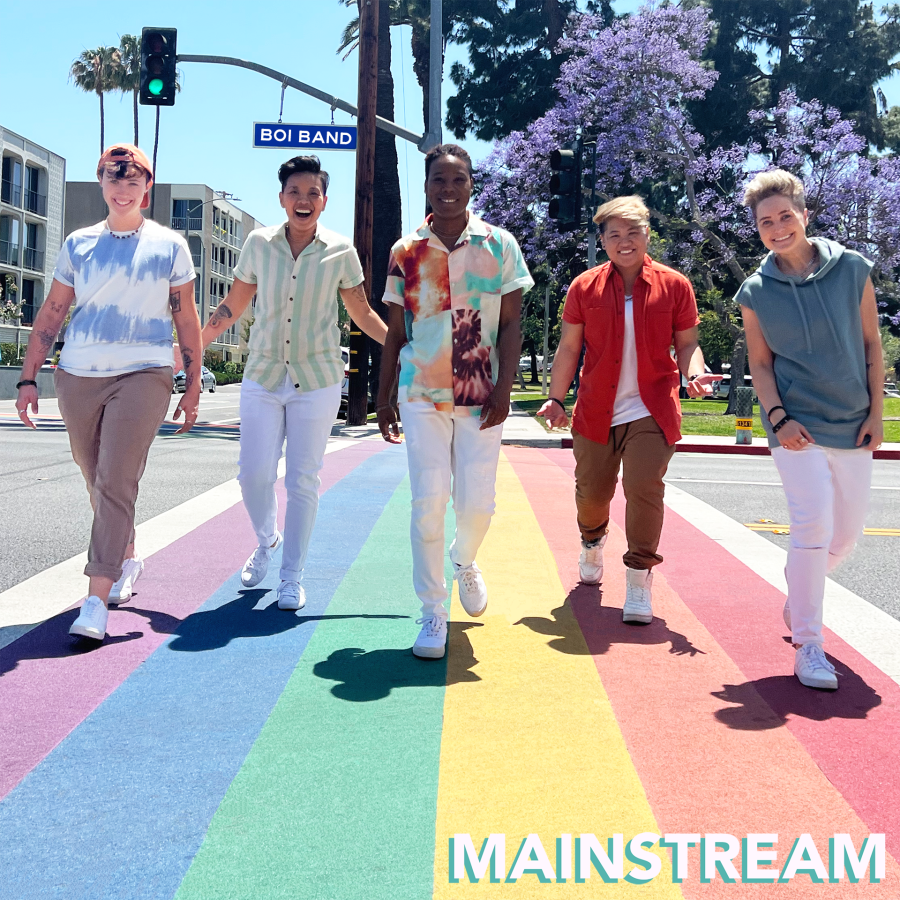 We’re living in a fraught time. On one hand, queer content is starting to really carve its own space in the pop culture lexicon. But on the other hand, there are record numbers of anti-LGBTQIIA+ legislation out there. And we need to be open to both sides of that reality. Conceptually, the BOIs’ song “Mainstream” comes from that dichotomy.

“On one hand we’re here to insert the queer perspective into heteronormative society. That’s the goal,” Sonya said. “But we’re also trying to buck the mainstream. There’s a clash that we’re intentionally putting out there. People understand that we are different, but we want to be in everybody’s faces so they get our message, so they see that it’s time for a band like us.” With lyrics like “mainstream is overrated, never felt appreciated for all the things that I love, no I never felt enough,” the song speaks to the core of what it feels like to be a queer person today.

“Even if we were going to write a sad song or have sad pieces into it, we always wanted to bring back the aspect of hope into all of our songs,” Mik stated.

And reactions to BOI BAND have been overwhelmingly positive. I mentioned the “millennial boy band fan to queer girl pipeline” to them, and how the group is the perfect amalgamation of what 15-year-old me and 36-year-old me wants in my pop group. It’s time that masculine of center folks had some representation in the pop music space that is currently dominated by more femme presenting queer folks.

“This is bigger than all of us and more than we could ever imagined,” Kristin said. “And, that means everything to me, that we can touch people and help people feel supported and loved. That is exactly what I want. That’s what we want. And, it just feels good.”

And because they’re called BOI BAND, I had to know: were they actually fans of boy bands? Thankfully the answer was yes. Kristin, Sonya and Coda were all fans of *NSYNC, while Mik is a “One Direction kid.” Kayden likes both of those groups, as do I. Clearly, they have excellent taste, and it shows.

BOI BAND is definitely working on a full length album, but as fully independent artists, it’s expensive to record. They’re gearing up to get back to their songwriting, with the hope of an album in 2023. I will be eagerly awaiting.

Mainstream is available now, wherever you stream music.

Sa'iyda has written 23 articles for us.