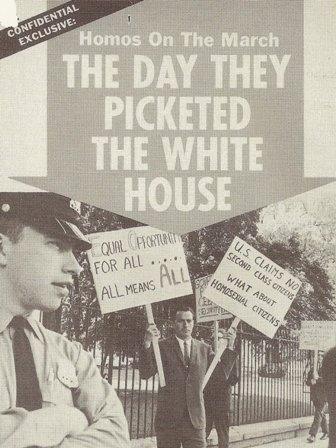 via The Lavender Scare

The Lavender Scare, a forthcoming film by Josh Howard, is the first feature-length documentary that looks at the United States government’s mass campaign to fire every gay person in government during the Cold War, ostensibly because they represented security risks.

“While the McCarthy Era is remembered as the time of the Red Scare, the headline-grabbing hunt for Communists in the United States, it was the Lavender Scare, a vicious and vehement purge of homosexuals, which lasted longer and ruined many more lives.

Before it was over, more than 10,000 Federal employees lost their jobs. Based on the award-winning book by historian David K. Johnson, The Lavender Scare shines a light on a chapter of American history that has never received the attention it deserves.

It examines the tactics used by the government to identify homosexuals, and takes audiences inside interrogation rooms where gay men and women were subjected to grueling questioning. These stories are told through the first-hand accounts of the people who experienced them.

The Lavender Scare shows how the government’s actions ignited an anti-gay frenzy that spread throughout the country, in an era in which The New York Times used the words “homosexual” and “pervert” interchangeably, and public service films warned that homosexuality was a dangerous, contagious disease.

While the story is at times infuriating and heartbreaking, its underlying message is uplifting and inspiring. Instead of destroying American homosexuals, the actions of the government had the opposite effect: they stirred a sense of outrage and activism that helped ignite the gay rights movement.”

In the 1950s in the United States, Canada, and Britain, people did not think particularly highly of gay people. Gayness was still medically classified as a psychiatric disorder, which made the landscape for coming out and acceptance significantly worse than it is now (human rights legislation, anti-discrimination legislation, gay marriage, etc, when you start to look into them, are all depressingly recent developments). Because of this, and other reasons, governments believed that having gay people around was a potential breach of security.

According to Patrizia Gentile and Gary Kinsman in their book, The Canadian War on Queers:

“It was believed that homosexuals, who might otherwise have been considered loyal citizens, were unreliable. Therefore, homosexuals would continue to be viewed as security risks if they were put in compromising positions by Soviet agents interested in blackmailing public servants who had secrets to keep as well as access to Canadian, American, and British security information.”

In Canada, there was also an initiative called the fruit machine (I am not making this up), which was a “scientific” method for determining whether federal employees had “character weaknesses,” which was what they considered gayness. (The contemporary Czech Republic has one of these things, too).

While the height of the lavender scare, the Canadian war on queers, and whatever Britain calls their mass firings was in the 1950s, the impacts continue today. The United States government only stopped discriminatory practices (on paper) against hiring gay people in 1995, and only extended benefits to same-sex partners of federal employees in 2009. Frank Kameny, one of the men featured in the film, and who is believed to have organized the very first gay rights protest in 1965, went to the signing.

It is this contemporary presence that makes films like The Lavender Scare — of which there are very few — so important. Teachers have to fight to get gay history recognized in schools — and not even specific elements of gay history, such as, for example, the Stonewall riots, but generally, such as the fact that major historical figures can sometimes be queer. It is also incredibly easy to forget our own history, and to see the gay rights movement as something that has really only been effective in the last five, ten, twenty years. If it is easy for us to forget, it is even easier for everyone else.

The Lavender Scare is based on a book by the same name published by the University of Chicago, which is a good academic publisher that does peer-review, which makes the movie extra-promising, especially if you are into that. The book, which was written by David Johnson, was based on research in the National Archives, on government documents, and on interviews with former civil servants. The film will be released next summer. I am already excited.