In the past few months, at least two Latina politicians, Mary Gonzalez and JoCasta Zamarripa, have come out as queer. And they’re not alone — there are a number of openly gay or queer Latino candidates running for key positions, like Jacob Candelaria, who is set to become a state senator of New Mexico and is openly gay. Candelaria points out that in New Mexico more people support gay marriage than oppose it, and says that “The fact that an openly gay candidate can win by such a large margin speaks to the notion that New Mexico voters vote based on the character of the person and their values, not their sexual orientation.” 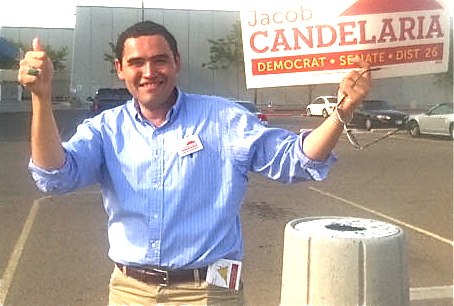 Aside from representation for both ethnic and sexual minorities in the American legislature and visibility for the community which experiences an intersection of multiple identities, the fact that this many Latino politicians feel comfortable being out and are still being elected to office may affect how the next few years plays out for both the Republican and Democratic parties. Appealing to Latino/a voters has been described as a “great challenge” for the GOP, with Latino/a voters becoming more heavily Democrat while becoming a larger and larger percentage of the voting public at the same time. The GOP’s stance on issues like immigration reform hasn’t helped them win over Latino/a voters, and as with many of their voters, the GOP has hoped that religious rhetoric would win over a demographic statistically likely to have ties to the church, and sweep under the rug the fact that their actual policies are harmful to the group at hand.

It’s not uncommon for people of color to be unfairly painted as anti-gay; for instance, when black and African-American voters were blamed for the passage of Prop 8 in California, although that myth was quickly debunked and attributed to flawed exit polling. For a mainstream culture that struggles to understand the concept of a diverse and complex ethnic community at all, the fact that a racial or ethnic demographic could hold a multiplicity of views on same-sex relations – or even identify as queer or the family of queer people themselves! – can be hard to process. And for the GOP, who struggles to understand that not everyone thinks “family values” means hurting other families so that you can reassure yourself that yours is the best and most normal, the fact that a voting demographic could be strongly tied to the church and identify family values as being important without wanting to deprive others of their right to happiness and security.

Right now, Latino/a voters strongly back Obama, and GOP needs to figure out a way to make itself appealing to Latino/a voters in the coming years if they want to compete with the Democrats in this arena. The Republicans have vowed to step up their game when it comes to courting the voting bloc, but among the many other missteps Republicans have made in this area in both the short and long term, the provenance of politicians like Mary Gonzalez and Jacob Candelaria may mean that this is just one way that the GOP’s virulently anti-gay stance may backfire on them. It’s just one indication that Latino/a voters, like most Americans, are happy to elect LGBT officials to office if that’s what’s best for their district, and not particularly interested in electing bigots. And if the GOP is determined to continue being bigots, they should be ready to deal with the consequences.