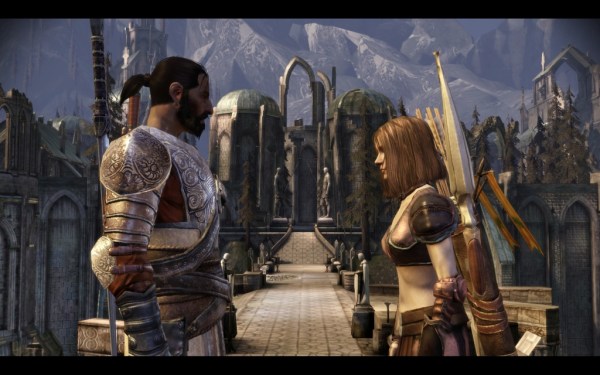 In what amounts to one of the poorest gaming decisions ever made by anyone, I started (the epic) Dragon Age: Origins right after I got to the third disc of Final Fantasy XIII. And while I’ve played Dragon Age for a respectable chunk of time now, I’m hardly even out of the starting area. I do tend to plod along in RPGs and find myself easily distracted by assorted conspicuously shimmering items, but my RPGADHD wasn’t to blame for my slow start in Dragon Age. Instead, I blame it on sexism, bare midriffs and the ever-looming spectre of the patriarchy. The patriarchy I said! The patriarchy is also likely to blame for all of my ATM fees and the fact that I need new brake pads even though the guy at the garage told me I didn’t.

Dragon Age: Origins is a classic RPG in the classicest sense possible. You’ve got castles, shires, mages, kingdoms and I imagine a dragon or two, but I’ve yet to meet one. The game also boasts a pretty intricate character customization system, where you get to decide all kinds of stuff that will affect your interactions in ways irrevocable. You choose a race (human, elf or dwarf) a class (warrior, mage or rogue), an origin story and of course, your gender.

“At the character customization screen, I tweaked little
things about her appearance, probably subconsciously trying to make her as queer as possible…”

Since 1) it’s all kinds of refreshing to have a female protagonist and 2) later in the game I can initiate some lady on lady action (really!) and 3) elves, I choose a female elf rogue. At the character customization screen, I tweaked little things about her appearance, probably subconsciously trying to make her as queer as possible so I can emotionally invest in the aforementioned sexytimes events when the fateful moment arrives. (Which I recognize is both unsettling and unhealthy.)

So now my rogue’s all ready to roll. I endure a cut scene setting up the story and introducing a few of my elf friends; so far so good, they seem like nice guys. But then, there she is, my very own elf rogue as a playable character, smack in the middle of some likely enchanted forest, and she looks like she’s about to snap in two. Her arms are brittle little twigs, her neck has an unimpressive circumference in spite of my modifications and she’s wearing a goddamn chainmail bikini.

Sure, she’s a starting character and she should be dressed in rags so I have a ravenous appetite for phat loot, but really? I make a male elf to check out his armor (exactly the same, just the “male” version) and he sure as hell isn’t bearing his midriff. But I’m dead set on a lady-rogue, so I stick with her for a while. Her appearance continues to bug me (even after a few armor upgrades) and I find myself unable to invest in her as a character. I just have a hard time believing that this frail, blandly feminine little thing would really be invited to join an elite clan of warriors and sorcerers. And what’s an RPG about if not successfully suspending our disbelief?

I finally reached a breaking point when a few fellow-adventurers join my party and their characters are exactly what I had in mind: they’ve got big pauldrons and that shit looks heavy, like it should. Even the other low-level rogues look like hot shit.

So I gave up. I tried an elf mage, which began in a much more gender neutral fashion since boy mages can wear robes too and that’s just the way mages roll. But I still abandoned my new mage halfway through the origin story because she looked too frail and hyper-feminine for my liking, which is acceptable for a mage I suppose, but still.

“World of Warcraft offers some pretty intense armor, but sometimes even these pieces look small and pitiful on a female character, or in the worst case scenario, they leave a female avatar’s stomach puzzlingly exposed…”

So after the mage fail, I tried a human, again to no avail. Running out of races, I reluctantly settled on a female dwarf. I’m usually not down with dwarves, so this whole ordeal really pushed me out of my comfort zone. In WoW I do my shopping in the dwarf city (they have nice wares), but I’ve never had the desire to play as a dwarf. But suddenly it appeared that the lady dwarf might be my salvation, affording me a more robust body-type and wider-set, delightfully less delicate facial features. And lo and behold, when I start playing her she’s pleasantly stout and she’s even got a full set of armor on. Her chainmail covers her stomach, which really isn’t a whole lot to ask when you’re going into battle against f*cking arch-demons or whatever, right?

I mean, it’s weird that gender is one of the main options in any customizable RPG, but I get it. Video games aren’t exactly rife with post-gender nuance. But really, an entire customization bar devoted to eye-shadow? Christ.

Dragon Age is by no means the first time I’ve run into this kind of avatar gender trouble. In World of Warcraft, I’ve always wanted a human female character, but I can’t seem to care about one enough to escort her past level 20. In fact, my main character is a level 78 hulking blue alien with mutton chops.

WoW does offer alternate female body types with its dwarves and orcs and whatnot, but I’m still let down that I’ve never taken a foxy human paladin to third base. As you level up,WoW offers some pretty intense armor (think shoulder pads with flaming skulls attached), but sometimes even these pieces look small and pitiful on a female character, or in the worst case scenario, they leave a female avatar’s stomach puzzlingly exposed. 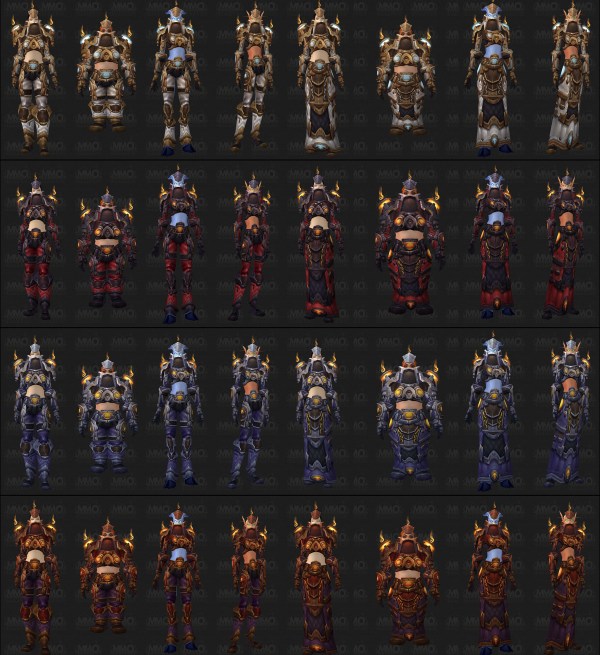 And just check out the gender difference in this set of pants from an article examining WoW’s male vs. female armor issues. On the female blood elf they appear to be some kind of weird straps around her legs, while on the male blood elf they’re, well, pants. 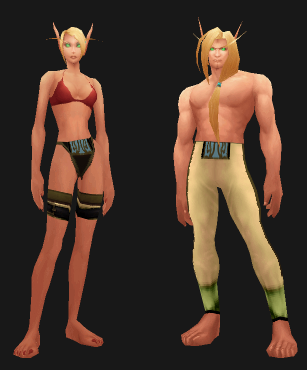 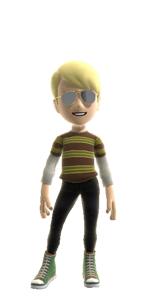 After being generally frustrated about this kind of stuff in Dragon Age (and in real life), I realized that even the highly-customizable Xbox Live avatars are needlessly gendered. And Xbox Live perpetrates the worst kind of gendering too, where females have a totally different set of (shitty) clothing options. It only took a few frumpy skirts to make me realize that I needed to make my Xbox avatar male, so I could have my pick of all the cool clothes and features and make it resemble me. And you know what? It looks just like me (except for a virtual monocle I sport from time to time) and I’m not particularly masculine or “butch” by any means. So what gives?

Certainly this could all be easily remedied if male and female characters in any given game had access to both the male and female pools of clothes, accessories and tweaks. Maybe your male warrior would want to mix it up with a little blush, you know? That’s more fun for the whole family.

Perhaps our great grandchildren will be running around with genderqueer knights and boi rogues. Only time will tell.

Have you run into similar frustrations? How do you hack your avatars, if you don’t like the options in your lap? Share your own avatar woes (or triumphs!) below!