Religious exemption laws are in place in states home to 49% of LGBT Americans, mostly in the South and Midwest. A new report from LGBT Movement Advancement Project breaks down the different types of religious exemptions enacted in different states and analyzes their impacts.

For people in the 21 states with broad religious exemptions, including 43% of LGBT Americans, they are at risk of being denied services and otherwise discriminated against if a business owner or organization claims providing those services will violate their closely-held religious beliefs.

“Non-tailored religious exemptions in general open a can of worms that raises serious concerns for not only LGBT folks but for women, for healthcare,” said report author Heron Greenesmith. 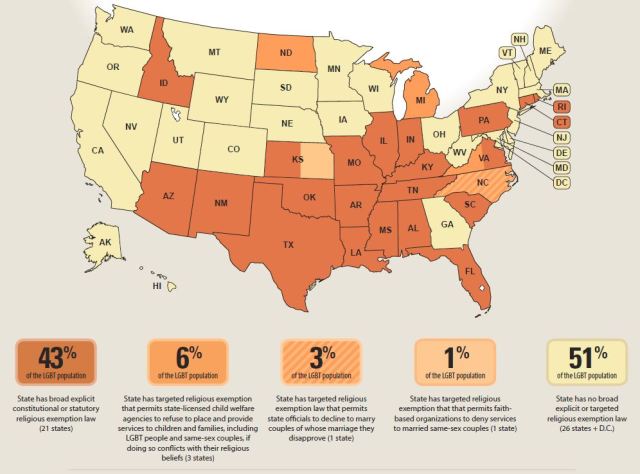 These laws, whose state versions are modeled on the federal Religious Freedom Restoration Act of 1993, today they come paired with increasing anti-LGBT and anti-sexuality rhetoric from politicians that makes their cultural and individual impact clear. Since the Hobby Lobby ruling, shifting standards have made it easier for businesses to apply the laws. That case held that certain corporations could use religious exemption laws to deny covering birth control under the Affordable Care Act. Although the case only applies to federal law, the report explains that “it is very likely to affect how states interpret who is considered a ‘person’ under their own state religious exemption statutes.”

Not all religious exemption laws are the same. Kansas’s law, for example, has a particularly broad definition of what constitutes a substantial burden on the religious person applying a law and also only requires that the burden be “likely” to occur. Kansas also explicitly allows faith-based organizations to deny services to married same-sex couples. Three states — North Dakota, Michigan and Virginia — have laws that specifically allow state agencies to refuse to place children with a particular family if doing so conflicts with their religious beliefs.

As with other types of laws that directly or indirectly discriminate against LGBT people, RFRA laws are primarily in place in Southern and Midwestern states. MAP’s executive director Ineke Mushovic notes that religious exemption laws give business owners in states that don’t protect LGBT people even more power to discrimination, and to challenge any local non-discrimination ordinances that may be in place.

“We desperately need explicit statewide nondiscrimination protections for LGBT people, with the expectation, though not the certainty, that courts in the South and Midwest would follow the lead of the Supreme Court and other state courts in saying that nondiscrimination laws serve a compelling government interest and businesses cannot exempt themselves from those laws,” Mushovic said. “Secondly, we need to revise existing broad religious exemption laws to clarify that these laws should not be used to discriminate against or harm others.”

MAP’s report provides a useful primer and resource for anyone who is concerned by and working against these complex laws. It is part of the organization’s ongoing Equality Maps series.