In California, domestic partnerships are legal and the state recognizes the status of couples who were married in states where same-sex marriage is legal. Adoption rights are LGBT-inclusive. Anti-discrimination laws include sexual orientation and gender identity. 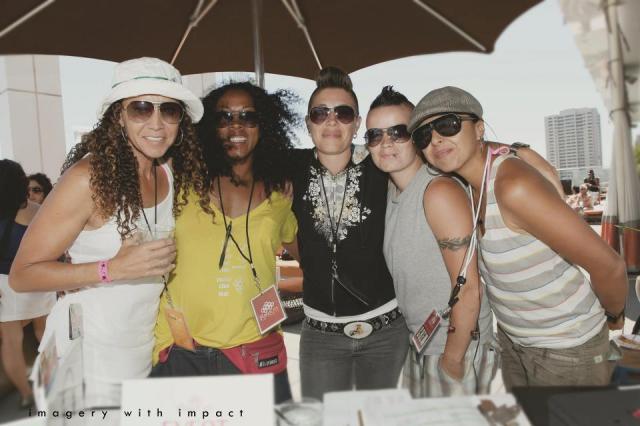 San Diego has a big military population and is known to be politically conservative than the other California spots on this list, but it’s still super gay. Gays have been taking over the Hillcrest neighborhood since the 1970s and San Diego’s got the nation’s second-oldest LGBT community center, The Film Out San Diego Festival and several of its own LGBT publications including SDGLN and the lesbian FlawLes Media Company.

In Wisconsin, domestic partnerships are legal but marriage and adoption rights are hetero-exclusive. Non-discrimination policies are sexual orientation, but not gender-identity, inclusive. 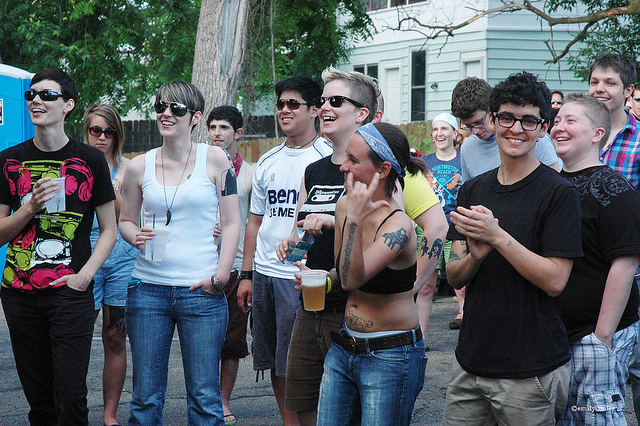 Much like Ann Arbor (#14), Madison‘s uber-liberal University keeps things temperate for lesbians in its home swing state. I mean, there’s an entire neighborhood endearingly referred to by locals as “Dyke Heights.” Fruit Fest, an all-ages all-day block party featuring live music and local artists and performers as well as a a 5K run, will celebrate its third year this summer (read all about it on Indie Queer). The 5K raises money for a scholarship fund given to an LGBTQA activist in high school or college.

In Minnesota, same-sex couples are denied any kind of relationship recognition. Employment non-discrimination laws include sexual orientation and gender identity. 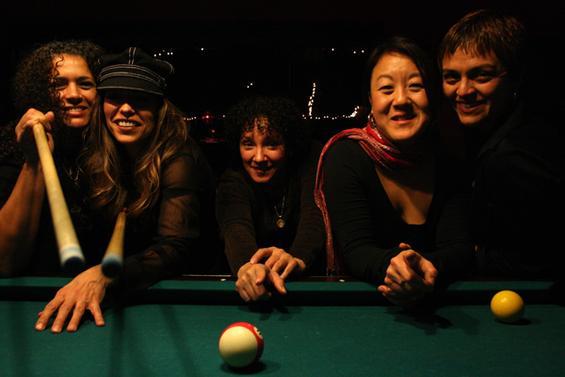 women at lesbian club PI on its closing night, via citypages.com, photo by B FRESH

According to our University of Minnesota correspondent “the stereotypical Minneapolis queer lady has piercings and lots of bicycle gear” and rumor has it the best place to meet a lady is at a game of WNBA team Minnesota Lynx. Also you can find ladies at nearby Carleton College. Did you know Sick of Sarah is from here? NOW YOU DO.

In Pennsylvania, there is no recognition for same-sex couples. Public employees are protected from gender identity and sexual orientation discrimination, private employees are not. (ETA: However Philadelphia has some of its own non-discrimination policies!) 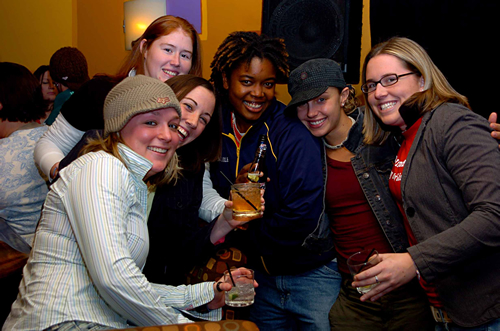 Thanksgiving at Sisters Bar in Philadelphia

Philadelphia has been pursuing the LGBT travel dollar for several years now ’cause it’s just that great to be gay there and not just for boys — Sisters is Philly’s three-floor dedicated lesbian bar in the heart of the Gayborhood and lesbian couple Marcie Turney and Valerie Safran own and operate six successful businesses on 13th street. Only a hop, skip and a jump away at Bryn Mawr, girl-on-girl culture abounds.

Temple graduate and Autostraddle Teamster Laura notes that “it’s a small city, but it’s got a whole lot of queer per capita (caveat: Philly’s also more hip per capita than most cities so be prepared to play lots of games of “hipster or gay?”). You’re just as likely to run across a kindred spirit at First Fridays as you are at OutFest. If Temple’s where you end up and you just can’t handle another intensely sweaty underage night at Woody’s, I’m sure the Philadelphia Autoteam would be thrilled to show you around.” 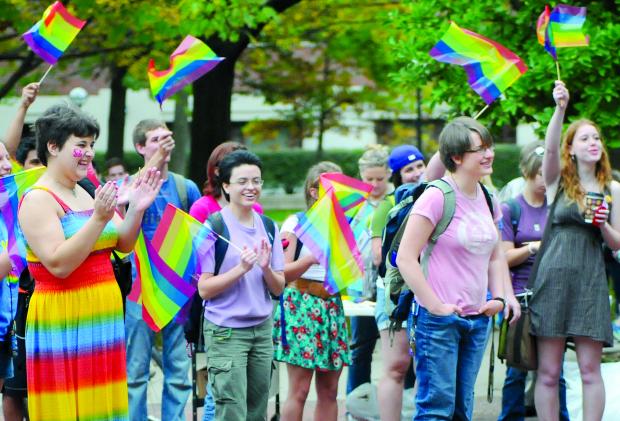 Coming Out Day at the University of Michigan, photograph by Austen Hufford for The Michigan Daily

Fun fact: 70% of the town’s same-sex couples are female! Uber-liberal University of Michigan was described by our LGBT College Correspondent as “a mecca for LGBTQA-Z students.” Ann Arbor and the University leans dramatically left, so there’s a lot of independent businesses and political activism here, as well as a dedicated LGBT bar/restaurant The Aùt Bar, gay bookstore Common Language, gay nights at Necto, two art-house cinemas and one independent film festival. Nearby Inkster hosts lesbian bar Stilleto’s, and Detroit Suburb Royal Oak has lots for queers too.

Meet local like-minded ladies in the Michigan Lesbogays group. Riese, Autostraddle’s editor-in-chief, grew up here and graduated from the University of Michigan, as did AS Writer Whitney Pow.

In Georgia, there is no legal recognition for same-sex couples or LGBT-inclusive non-discrimination laws. Any adult may adopt. 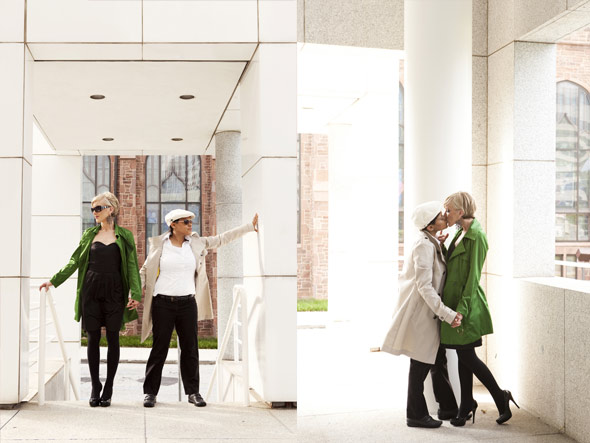 It’s the capital of the Homosexual South, but some report it’s much more gay-boy friendly than it is gay-girl friendly.  Regardless, Atlanta’s lesbian community is mega-diverse, My Sister’s Room is consistently recognized as being one of the best lesbian bars in the country and the famous Outwrite Bookstore still exists (well, kinda). Nearby Decatur is commonly known as “Dykecatur,” which sounds like a lesbian dinosaur.

In Colorado, there is no recognition for same-sex couples. Employee non-discrimination policies are sexual orientation and gender identity inclusive. Any adult may adopt. 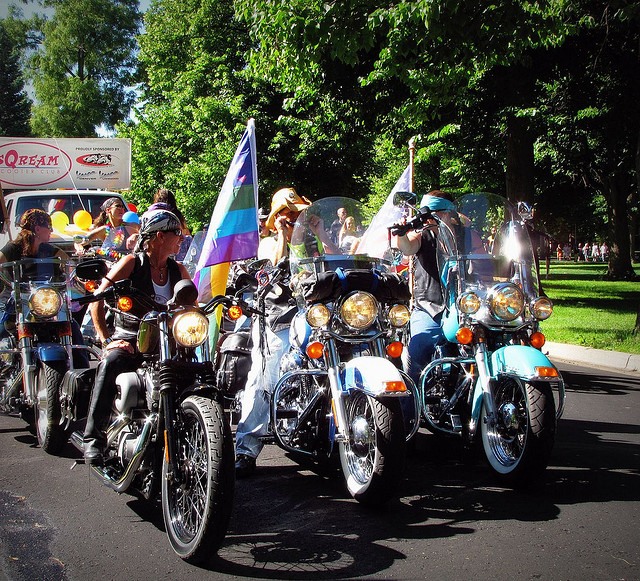 Denver Dykes on Bikes via “Colorado Sans” at flickr.com/photos/sandy_leidholdt/

Denver’s Gay & Lesbian Center kicks serious ass. And although that whole area of the country is often written off as being legally unfriendly to gays, that’s not so in Colorado — The Rights Five Campaign has the lowdown on Five Laws (including ENDA) that “enrich and protect the lives of LGBT people.”

In Texas, there is no legal recognition for same-sex couples or LGBTQ-inclusive employment non-discrimination policies. 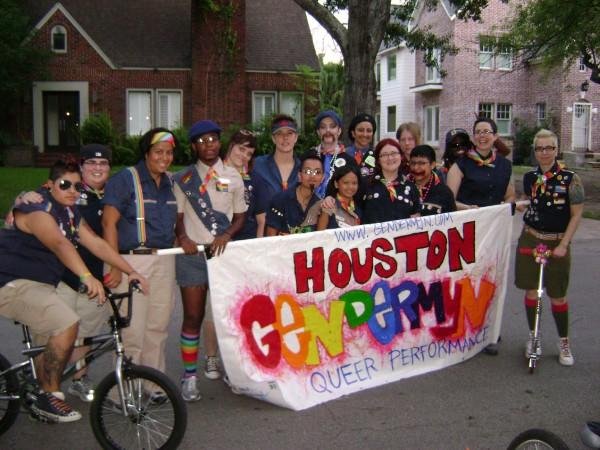 Houston’s the largest city in the country with an openly gay mayor, the 12th most populated-with-gays US city and it’s also just one of the largest cities in the country, period. A string of unseemly governors have no powers against Houston’s thriving community and legendarily enormous Pride parade. Chances, one of the largest lesbian bars in the world, recently shut down; but there’s still drinks to be had at places like Blur, The Usual and F Bar and additional queer activities happening at the Houston LGBT Youth Center, The Houston GLBT Political Caucus and Houston’s LGBT film festival, QFest. Houston’s Rice University has a healthy queer community as well.

In New York, same-sex marriage is legal and adoption rights are LGBT-inclusive. Anti-discrimination laws protect those on the basis of sexual orientation but do not include gender identity protections. 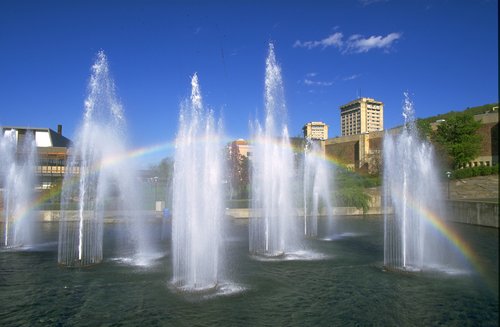 This tiny upstate New York town is best known for its two major universities, Ithaca and Cornell. It’s filled with hippies, good food, beautiful nature, wine and other stuff like that. Perhaps you wanna participate in a Lesbian Potluck or a Guerilla Queer Bar takeover. If you wanna travel there, here’s some special tips from our photoblogger. 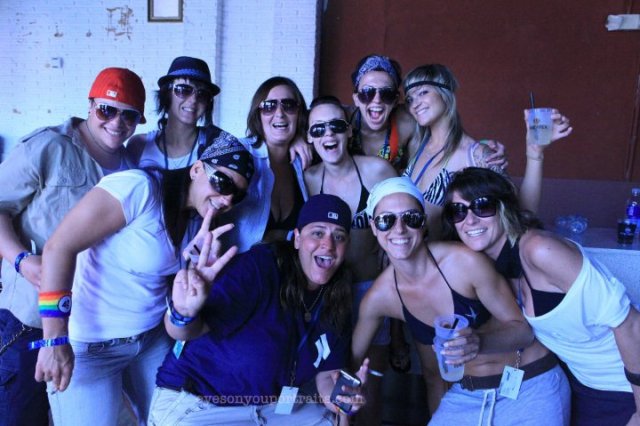 Miami is home to one of the country’s most successful lesbian event-planning companies, Pandora Events (responsible for Orlando’s Girls in Wonderland and Las Vegas’s Shedonism, among others) as well as the awesome non-profit Aqua Foundation for Women. South Beach hosts lots of LGBT parties, including (obviously) Pride, The Women’s Winter Party and Aquagirl. Also, South Beach supports its own lesbian glossy, She Magazine.

Meet local like-minded ladies in the Straddlers in Paradise group. 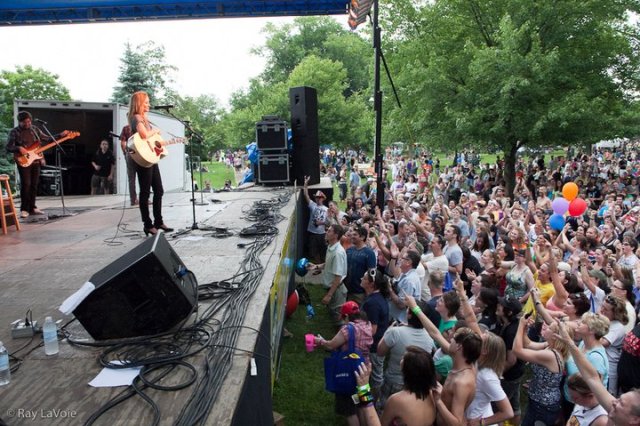 As we said in the beginning, we’re actively soliciting Queer Girl City Guides for any city in the world, including the ones on this list. So, if you wanna tell us how precisely your city rocks for queer women, here’s what to do: Email Laneia [at] Autostraddle dot com with a letter describing your connection to the city you wanna write about. She’ll let you know if it’s already been taken or not, at which point you’ll be responsible for crafting a comprehensive guide addressing things like the degree to which the LGBT scene is G vs. L, the environment for queer families, the college scene, local events/festivals, activist groups, nightlife, trans-friendliness, etc. You’ll also need to provide at least five of your own high-res photos (which you own the rights to), links to the places you talk about (and phone numbers/addresses when necessary), and whatever insidery details you’ve got.