In an acceptance speech at Make Equality Reality last week, Joss Whedon pitched an interesting alternative to the word “feminist”: “genderist.” The full 14-minute speech is really worth a watch, but if you can’t (or won’t, it’s cool), here’s the rundown: 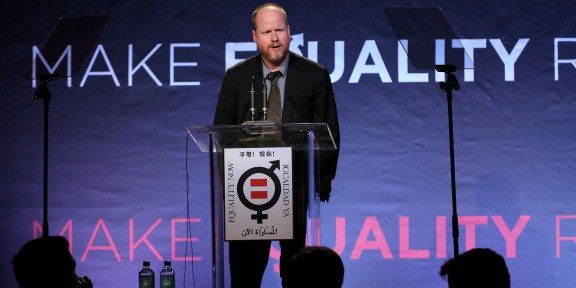 Joss Whedon delivers his speech after being honored by Equality Now. Via Huffington Post.

Predictably, reactions to Whedon’s speech have been all over the map. (Which, for better or worse, is pretty much the way it always goes down when men voice public opinions on feminism.) On Thursday, Jezebel‘s Katie Dries gushingly characterized the speech as perfect; two days later, HermioneStranger responded on Jezebel Groupthink that Whedon is “actually totally full of crap.” Salon‘s Katie McDonough resolutely rejected Whedon’s proposal that gender equity is a “natural state,” while The Atlantic‘s Noah Berlatsky penned a polemical piece criticizing the speech’s lack of deference to feminist history. There were valid points all around, particularly in the critiques of how Whedon framed the issue.

From my perspective, I thought that what Whedon presented was interesting, well-intentioned, and way off the mark. For starters: I disagree with his conception of what a feminist is. So perhaps it is unsurprising that I also fundamentally disagree with him on why “feminist” is unnecessary and “genderist” is not. 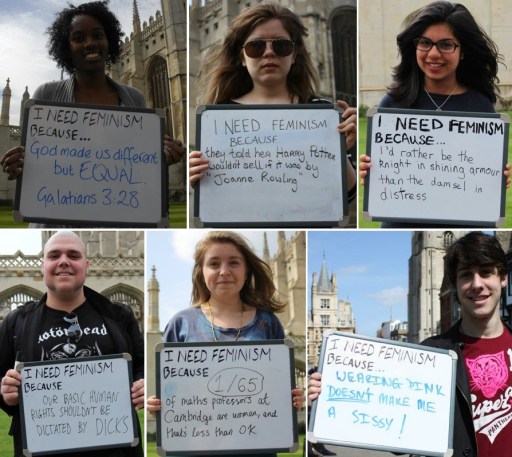 A crowd of people who find feminism necessary. Via Sarah Salway.

To me, calling yourself “feminist” doesn’t just mean that you believe abstractly that men and women are equal. It means that you’re actively engaged with the idea of gender equality. You see the inequality in the world and are bothered by it enough to want to make it better. Feminism is a political philosophy necessitating action – even if the only action you’re able to take right now is to read about feminism online. This form of participation is actually a really important one because it effects change beginning with the person you’re most responsible for: yourself. It’s a beautiful thing. It makes the world a better place. (And yes, feminism has its problems, some quite serious. But from where I’m standing, I see a lot of people working hard to improve this, and there seems to be much more positive momentum than negative.)

“Genderist,” on the other hand, is a much more passive concept than “feminist,” because it’s a word that you apply to other people. It implies no personal ownership. You can give lip service to “genderist” all day long and sit back, feeling like you’ve already done your duty merely by saying the word aloud. There’s no responsibility on your part to follow up, or to effect any positive change in the world. It’s a minimum effort approach, and given the pervasive sexism throughout our society, I feel like this simply isn’t good enough. 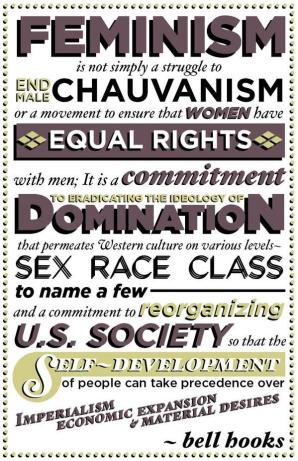 Within Whedon’s original speech, he does address the idea of ongoing struggle. “We will never not be fighting,” he said emphatically. But, “[language] is how we understand society. The word racism didn’t end racism. It contextualized it in a way that we still haven’t done with this issue.”

Really, though – is comparing our language and thinking around gender inequity to language and thinking around racism really accurate? Although the effects of racism and sexism are intersecting and overlapping for many people, that doesn’t mean that their histories are the same, or that the same methodology will end both of them. Whedon’s own work, which often features strong female protagonists but often suffers from misguided “colorblindness” and rarely features people of color, is in fact an example of that. Whedon doesn’t seem like he knows enough about racism or the word ‘racist’ to necessarily be basing entirely new branches of feminism off of it.

Besides, don’t we already have a similarly functioning word with “sexist?” Pithy jokes about ’70s-era powder blue suits aside, what is the actual objection to this word? (Haven’t the ’70s passed yet? Isn’t that what Whedon was going for, a word that evokes a sense of something whose acceptability is behind us?) 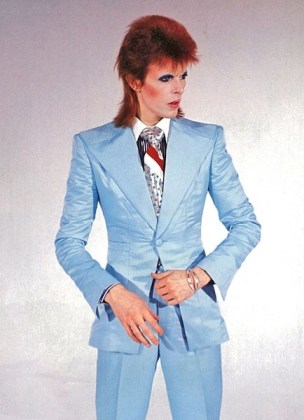 Actually, I’m kind of into David Bowie’s suit here. But I’m not into sexism! Via The Art Archive Project.

In truth, what Whedon is offering with “genderist” is a less loaded term; a softer, prettier descriptor for a really ugly thing. And while I’m sure he didn’t mean it this way (…right?), I feel like it’s a serious misstep for a man to suggest to a group of women that they might make more progress if they would just consider using a less aggressive tone.

“Genderist” is a rhetorical device that lets people off the hook too easily and further marginalizes feminism. Once you start describing things as “genderist” you don’t even need to say the word feminist anymore, much less process how it relates to your life. And that just isn’t a thing I can get behind.

So thanks but no thanks, Joss Whedon. You can keep “genderist” to yourself for now; I’m sticking with feminism.