This week’s episode was called “Advanced Gay.” I guess we are once again excluded from the term gay because there were no lesbians. The fun begins when two gays guys with a pocket full of Hawthornes approach Pierce and ask for his autograph.

Britta: I’m just impressed you got through a whole conversation with two gay men without going like this.
Pierce: Wait. Those guys were?…I assumed they were just brothers or wealthy.

A viral video has emerged touting the excellence of Hawthornes. Pierce is not amused and wants the group to stop putting gay things in his mouth. That is until he realizes what a profitable demographic gay men are. You know any poor gay white guys? I don’t. They’re like nargles. Only two people believe they exist. He’s launching Hawthorne pride wipes. They may cost more but they’re gayer and will debut at Greendale’s First Annual Gay Bash. This should rile up a whole mess of people because everyone knows it’s not first annual, it’s inaugural. Oh yeah, and gay bash may not be the best wording. 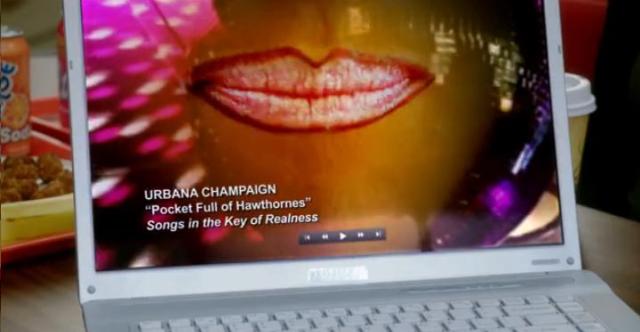 Pierce’s dad shows up and is disappointed in his choice friends of minorities and jewesses. The gay bash is off until Jeff uncancels it. Pierce worries that his dad will disown him. Instead of understanding the gesture as Jeff helping him (because why would Jeff ever help him when he hates Pierce), the old guy backs up Britta’s astute assertion that Jeff’s meddling in the situation is because of his own issues with his father.

Troy is kidnapped by the air conditioning unit and his initiation begins.

He has to make the tough decision between the nearly identical professions so he goes to his trusty buddy Abed who is unfit to follow a gut instinct.

Troy: Can you pretend to be me?
Abed: I like football but also I don’t.
Troy: Perfect. 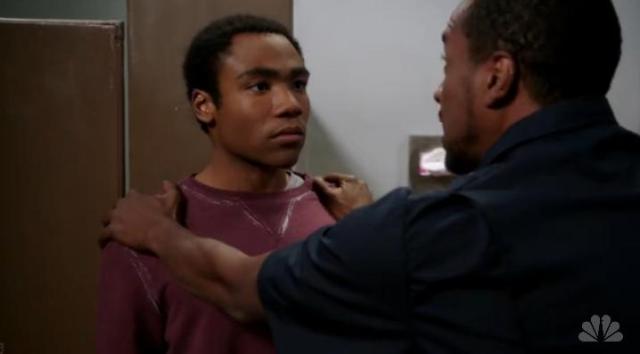 The bash is going as well as gay parties go so it’s amazing. Pierce’s dad shows up and ruins the fun. After revoking the company’s support of the gay community, Pierce fakes a heart attack. While in the hospital, Jeff gives Mr. Hawthorne a piece of his mind on behalf of sons with shitty fathers everywhere. Pierce’s dad has a real heart attack this time and dies. I can’t even with the rest of the episode because I died when the priest told Britta she was the worst. Nothing else matters. I hope you liked it because this is one of my favorite Community episodes ever.

“The Isolation Purmutation”
by Lizz

This week’s episode was the first episode I can ever think of that featured exclusively the girls. Not in a sideplot, not even with a sideplot about the boys. This week, it was all about Amy. 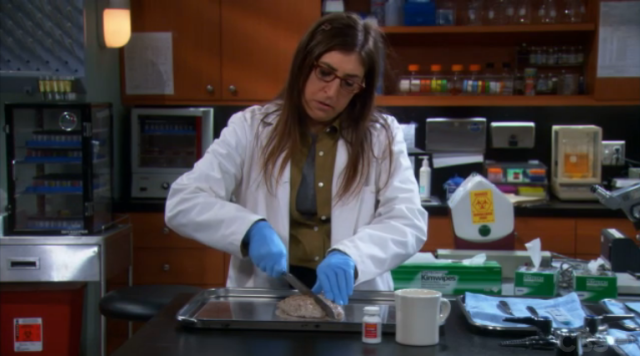 I LOVES THE AMY!

It’s my official opinion that there is no greater betrayal than going shopping and leaving out one of your friends. I mean, not really, but it does suck. So, you can imagine how Amy felt when she discovered that Bernadette and Penny went shopping for bridesmaid dresses without her. Yup, she fell into a deep pit of sinking harp playing depression. Sheldon couldn’t even get a hold of her by any normal means of communication.

Sheldon: I can’t seem to get in touch with Amy. I tried e-mail, video chat, tweeting her, posting on her Facebook wall, texting her, nothing.
Leonard: Did you try calling her on the telephone? 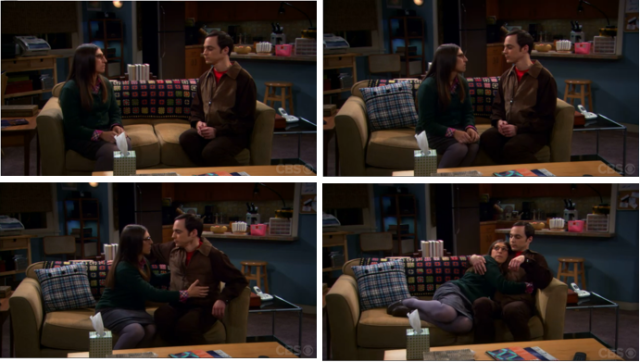 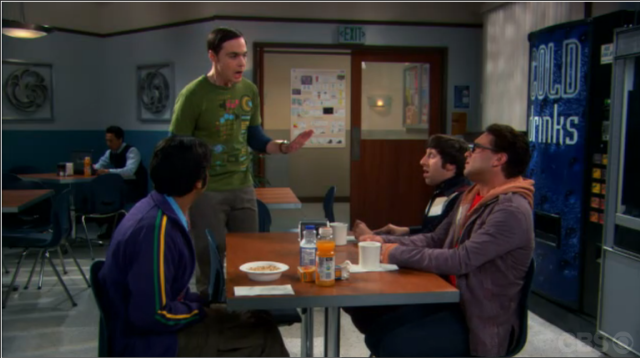 NOTHING HERE IS FUNNY. STOP LAUGHING. NOW. NO LAUGHTER.

Sheldon asks Leonard and Howard to “get their women in line” (grr) so they confront the girls over their total ultimate betrayal. When the girls find out how upset Amy is, they rush right over to her lab to apologize. Amy’s busy away in the lab cutting up tumor tissue from brains. I can tell you from experience, you never want to interrupt a woman while she’s moping and doing lab work. 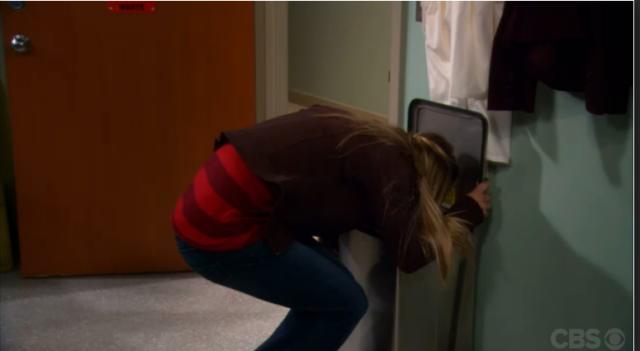 So Amy does what any smart, neurosurgeon slash 90’s child star would do. She gets hammered in a liquor store parking lot, calls her boyfriend to pick her up and shows up to work hungover. Saddy. In the harsh light of day her friends apologize again. This time, Bernadette asks Amy to be her maid of honor. Yay! Actually, the drunk parts were funnier. 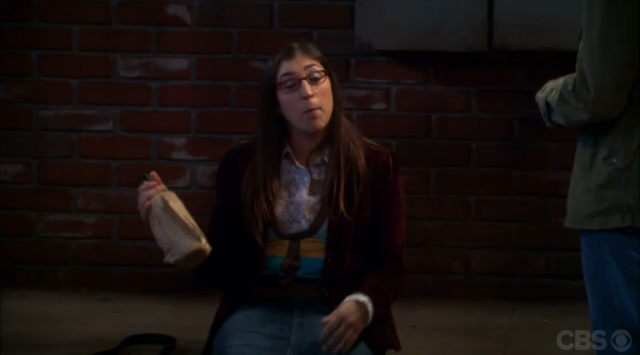 “End of the World”
by Brittani

This week Parks and Rec does something it does fantastically: it makes fun of idiots. The Rapture has come to Pawnee in the form of a cult called the Zorpies. The Zorpies think they are getting over on everyone by writing checks for the next day. It’s pretty funny.

Leslie: They’ve said that the world is going to end fifteen times and the only bad thing that’s ever happened on any of those dates is Lance Armstrong dumping Sheryl Crow.
Chris: That was a tragic day. Livestrong.

Ron gets the chance to sell flutes and recorders since they are mandatory for the ceremony. Dealing with this ordeal also forces Ben and Leslie to hang out. When the reporter begins to flirt with Ben, Leslie gets a little protective.

Shauna: Actually we were having a really great talk.
Leslie: Keep your pants on.
Shauna: What?
Leslie: I mean keep your pants on girrrl. I mean, those are really nice pants, I really like your pants. Where’d you get ’em. Do you wanna go buy some more pants or umm walk away from here? 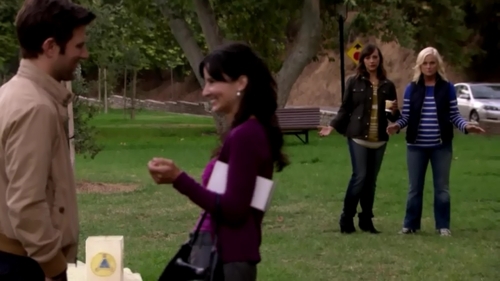 Entertainment 720 is in its last 24 hours so Tom decides they should throw one last shindig. There’s a triple VIP area, shrimp wall, make out room, and a Bengal tiger. The company isn’t saved by the party or anything but LUCY IS BACK. Am I the only one that thinks she’s hot? She’s in grad school now so maybe that makes her hotter? Or less hot. Depending on where you’re coming from I guess.

Andy and April break up the monotony of their nights by tackling Andy’s bucket list. After knocking off a few items, they decide to go to a big hole in the ground that some people say is pretty.

April: Look. This is a stupid idea but right at this exact second we have enough momentum to do something stupid before we realize how stupid it is.

I think this is how most stupid things happen. Momentum. It’s also how you get dragged from party to party when really you wanted to go home and take a nap after the first twenty minutes. 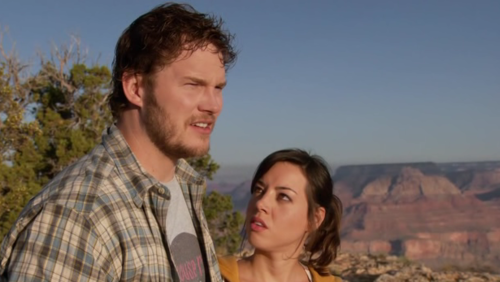 How cute are Andy and April? Is Leslie making the right choice by letting Ben go?