+ In his last campaign stop in Iowa, Ted Cruz took a bold stance against same-sex marriage and LGBT rights in general, saying that the US was in a “time of crisis” regarding those issues and that his presidency “would not endorse” the SCOTUS decision on same-sex marriage, which is a bit baffling as “endorsing” SCOTUS decisions isn’t really a thing presidencies do anyway. He also argued that all the polls saying that the majority of Americans support same-sex marriage are “skewed,” because he knows that in reality Americans “overwhelmingly disagree” with it.

“It was a sad day when I saw the Capitol building all lit up in the rainbow colors,” DeLong said, referring back to June, when the White House used a colorful light display to celebrate the Supreme Court’s decision legalizing same-sex marriage across the country. “How will your faith have a positive effect? How will you light that faith to make changes?” As the audience in rural southeast Iowa applauded the question, Cruz nodded. “You’re absolutely right,” he said. “Our country is in a time of crisis. We’re losing who we are.” 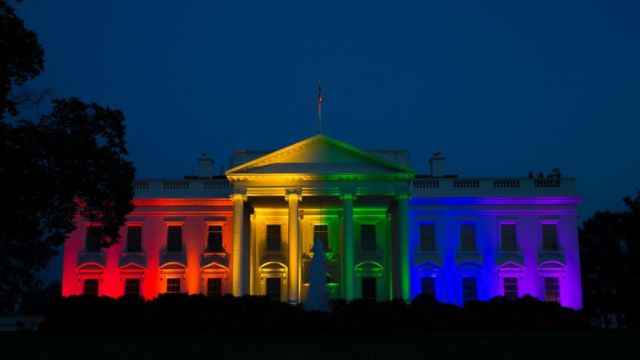 this is what made Ted Cruz sad

It’s an interesting gamble to make, especially at a time when candidates are down to the wire on trying to win over Iowa caucus voters — that they’ll be drawn to anti-LGBT rhetoric, that even conservatives who don’t have kids and friends and coworkers who are out and who they care about more than Cruz. This kind of campaigning seems like it was more expected in 2008, or even 2004; we’ve seen in things like major corporations opposing Indiana’s RFRA bill that traditional GOP interests aren’t necessarily aligned with being anti-gay anymore.

There is a crowded race, though, and everyone has to do something to differentiate themselves! Is this part of Ted Cruz’s strategy for it? Possibly! Is it enough to win him Iowa? We’ll find out soon!

+ Tonight — to my joy and delight — there’s another Republican debate. But Donald Trump won’t be there, because he’s mad at Megyn Kelly, and she’s going to be a moderator. That’s a real thing that adults are doing! He wants FOX to tell Megyn Kelly she can’t moderate, but so far they’re sticking with her. It seems like a deliberate message to send Trump that they don’t live by the dictates of the ratings he brings, and that they’re a network that’s at least slightly separate from the candidates and their campaigns. Traditionally it’s assumed that candidates need debates to connect with voters and poll well, but already Trump has been bucking trends as far as how that all works. How will it impact his race? I don’t know, but I’m happy to think that I might not have to watch him tonight.

+ A new ad from Jeb’s super PAC references Terri Schiavo to illustrate Bush’s commitment to the “right to life.” Michael Schiavo, Terri’s husband who survives her, is not pleased, calling the ad “disgusting.”

“It is simply disgusting that Jeb Bush and his super PAC would exploit my wife’s tragedy for his crude political gain,” Michael Schiavo said in a statement. “Shame on Jeb Bush.” 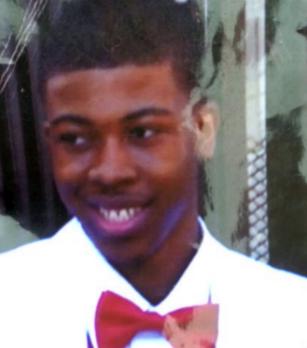 + The city of Ferguson, MO reached a “tentative deal” with the Justice department to reform its police department. The updates include “bias-awareness training,” a “robust accountability system,” and “[ensuring] that police stop, search and arrest practices do not discriminate on the basis of race or other protected characteristics.” How will that last be accomplished, exactly? Not totally clear, although there would be some changes to municipal city orders, like prison time for failure to pay fines. Ferguson has until February 9 to vote on whether to accept the agreement.

+ In December, Chicago was rocked when CPD killed 19-year-old Quintonio LeGrier and his neighbor after receiving a routine domestic disturbance call from Quintonio’s father. Now it seems that before the elder Mr. LeGrier called the police, Quintonio himself tried to call 911 three times, and each time the dispatcher refused to send police.

+ At least 31 female immigrant detainees who went through Santa Ana City Jail say that strip searches were used as a pretext for sexual assault on them.

One detainee said that she went through five strip searches in two months, then again every time she came back from immigration court. Another detainee said that she had to undergo ten strip searches in seven months at the facility. And women who menstruated were not provided with special provisions either, having to remove their period pad in their underwear during inspections. A 67-year-old woman also endured multiple strip searches at the jail, despite suffering a hip dislocation and pain. Even asylum seekers who survive sexual assault and rape were subjected to strip searches. Gloria Hernandez, a lesbian and a sexual assault survivor from Honduras, said that she has been strip-searched seven or eight times, which resulted in her suicide attempt at the jail.

+ It seems like all legislators can find time to do these days if they try to push aggressive laws restricting abortion access, regardless of whether or not they’ll pass. Florida is the latest on this trend, with several anti-abortion bills, including one that “would make performing an abortion a felony.” But that’s just outright outlawing abortion, that’s not possible after Roe v. Wade, is it? Well, no fear! This would still be allowed:

The bill would permit abortions under the conditions that two separate doctors confirm in writing that the procedure would be “necessary to save the pregnant woman’s life or avert a serious risk of substantial and irreversible physical impairment of a major bodily function of the pregnant woman other than a psychological condition.”

+ The legal victory in which a PA grand jury chose not to indict Planned Parenthood and instead indicted the anti-choice activist who videotaped them under false pretenses was very inspiring — as is the fact that no investigation in any state has turned up any fault of Planned Parenthood’s — but it may not make a huge difference. Unfortunately, anti-choice GOP legislators have never been super concerned with facts, and they’re pressing forward with slandering PP on the basis of the videos in question.

+ On Wednesday, authorities arrested several members of the group occupying the Oregon wildlife refuge, and LaVoy Finicum was killed. Others left the occupation voluntarily after Ammon Bundy called for them to “go home and hug your families.”

+ German LGBT groups are setting up shelters and programs for LGBT refugees, who have been victims of discrimination and physical assault.

Schwulenberatung has had to find emergency accommodation for up to 70 people, mostly gay men, in private Berlin homes because “they had strong fears in the refugee shelters or became victims of attacks,” de Groot said. Social workers and volunteers believe that the estimated number of unreported cases could be even higher. “Many homosexual refugees do not trust police,” said de Groot, because authorities in their home counties “often persecute them for their sexual orientation.”

+ Last week, Orashia Edwards, a bisexual Jamaican man, was granted asylum in the UK after fighting for three years. However, a bisexual woman from Nigeria was denied refugee status to Ireland this week after the Refugee Appeals Tribunal decided parts of her story, which included living with and having children with men who didn’t know she was bisexual and who threatened her after finding out, didn’t add up.

+ Weeks and months into the Flint water crisis, Michigan officials still aren’t saying when Flint might be able to drink its water again. No one knows where the money to replace so many pipes would come from, and even if the money was there, the massive project would take years at the very least. Governor Snyder has said he will assemble a panel of experts, though, so!

In the meantime, environmental activists are filing a lawsuit that says what’s happening in Flint has violated the federal Safe Drinking Water Act in an attempt to try to force the government to replace the pipes.

+ We’ve likely all seen the headline by now, but: after the blizzard which incapacitated much of the East Coast of the US last week, the only elected representatives and state employees who got it together to show up to the Senate were women. A glimpse into a different world.

+ In December, South Korea and Japan brokered a deal addressing the history of Japan’s forcing Korean women into sex slavery for Japanese soldiers in WWII. South Korea accepted a deal in which Japan apologizes and contributes 1 million yen to a victim’s fund, but South Korea doesn’t have any legal responsibility to make sure that the program functions, and the terms of the deal require that after this the issue is considered closed forever. The 46 surviving women of Japan’s crimes aren’t necessarily satisfied with what’s being bargained on their behalf. Two, Kang Il-chul and Lee Ok-sun, are traveling to Tokyo to demand a better apology and compensation.

“This deal has made us look like fools,” said Kang on Tuesday. “It was agreed without consulting us. How could they have agreed on this and pushed us to one side? I’m furious. ”
It is as if the Japanese government is waiting for us to stop speaking out and die,” Lee said.